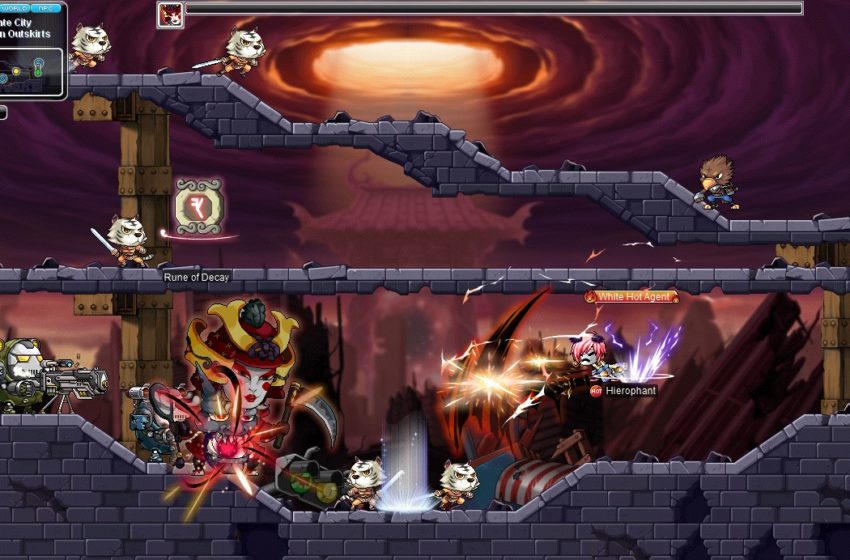 Players have been patiently waiting for the second part of the MapleStory summer update for some time now. Nexon has now released details on when the update will happen and what we can expect. The update is set to drop on July 22, and Aug. 5 with another event scheduled for Aug. 12. Players can look forward to a lot of events and new gameplay to be added to the summer update including a new area to play in.

Players will also get access to Daria’s Gift Event and the Rise Coin Express on Aug 5. The Daria’s Gift Event is a new quest that will allow players to get the Mysterious Magical Pouch skill. The new skill will allow players to earn Rise Coins by defeating monsters and gathering magical energy from them. Once the pouch is completely filled with magical energy, it will release an attack that damages all nearby monsters dropping Rise Coins in the process.

The Rise Coin Express starting on Aug 5. will be available to players that are level 101 and up. Players can participate once per day and up to 10 times per world. Players will earn Rise Coins by participating in the event. The event will only last 10 days, and participants will be given 1,000 coins on the final day. The rise coins earned through all of these events can be traded at Rise Coin Shops for new unique items that are not available anywhere else in the game.

Nexon claims that Burning World will be the biggest Level-Up event in MapleStory history. Players will be able to create up to three mega burning characters that will earn 50% bonus experience and some buffs. The event will run through Sep. 17 and will allow players to gain three levels each time they level up until they hit level 150. This event will begin on July 22.

The God of Combos event will delight combo-happy players and challenge those that aren’t quite as proficient at the combo system. The event will pit players against powerful monsters with the singular goal of getting the highest combo possible. Players that land 100 or 300 hit combos will get a random stackable buff they can use elsewhere in the game. This event will begin on July 22.

Starting on Aug. 12, players that are level 215 and above will have access to a new area in the Arcane River called Yum Yum Island.The Island will be located near the Chu Chu Island region. Players that want to visit the island will need to meet up with a new NPC named Bappy that will get you started on a new questline to discover the island’s secrets. Players will meet creatures that seem to be hybrids of other monsters. Further details on what exactly the adventure entails and what players will earn from it have yet to be released.