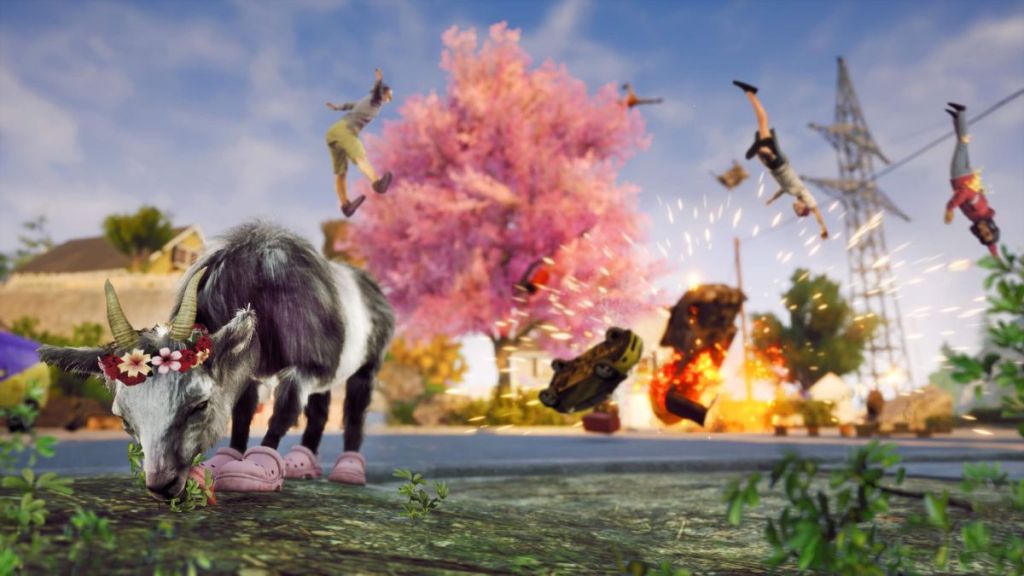 In Goat Simulator 3, you play as a goat of your creation that you can freely customize as you progress through the game. There is no story, but there are a bunch of events and minigames for you to participate in, either by yourself or with a friend. No matter how you play, you are sure to get into some crazy antics, but it might not take very long for you to get tired of the constant rush of being a goat in the big city.

This unexpected comedy sequel from Coffee Stain North hits very hard and will undoubtedly make you laugh as you headbutt your way into peoples’ cars, homes, and businesses. You will witness satirical and referential comedy that hits home on how harsh the world can be nowadays or how much we idolize superheroes. While all of this is great at first, the feeling of discovery does begin to wane shortly after playing, especially if you don’t have a friend to keep you company.

Become part of the Illuminati

After a long and amusing Skyrim-themed intro, your goat is let loose from the exposition cart into Fairmeadows Ranch, a wholesome farmland filled with everything a goat could want. After stepping off the cart, you are immediately welcomed into the Illuminati where you can rank up to gain additional perks and more control over the world. The main goal of the game, outside of causing as much pandemonium as possible, is to increase your rank by completing events that are over-the-top and filled with references to other games from Wolfenstein to Fallout.

Events in Goat Simulator 3 are filled with bizarre yet funny tasks for you to complete. For example, you can head to the mountains and put new batteries in the windmills or feed a giant chicken on the farm. Completing these events will get you Illuminati Points so that you can rank up in the not-so-secret organization. Never before has being a goat been so much fun.

You interact with the world around you by headbutting, licking, and ragdolling. Similar to games like Grand Theft Auto, you can hijack cars, blow up things in the streets, and even skydive off a beanstalk. While the story of Goat Simulator 3 is small and requires little thought, the game thrives off of the gameplay alone. I enjoyed running amuck through the forest as I discovered Bigfoot, teleported Mr. Snusk’s windmill-powered home around, and listened to a farmer make jokes about how writers use too much exposition nowadays. I found myself laughing more than I expected to, at least while I was discovering things for the first time.

What is the point of living in the world if you can’t express yourself through fashion? Goat Simulator 3 features a variety of customization options for you to try out. Completing events and minigames will unlock new clothing options, with many of them having some sort of special ability. Whether it is a Captain America-style shield that disobeys the laws of physics or a Jack Sparrow hat that summons the Kraken, the clothing options are sure to add an extra layer of comedic effect when you play.

The clothing in Goat Simulator 3 can help you complete events and beat your friends at minigames. Depending on the combination of gear you equip, you can either find yourself scaling buildings or blasting cars into next year. I found myself frequently changing my goat’s clothes so that I could try out everything the game had to offer — and I was never disappointed with the options available.

The downside of being a goat

While there are many positive attributes of goat life, sometimes you get the occasional tick that just doesn’t sit right. Goat Simulator 3’s map is packed with activities to complete and events to participate in, but you can easily get through all of the events within a few days. If you are a solo player, you will find yourself getting bored with the goat life once all the events are done and you have risen to the highest rank in the Illuminati. Even playing with a friend will only keep you entertained for so long since there aren’t many minigames to play for you to play together.

The size of the map is pretty decent, but it could be larger. It would be nice to see an additional area added to the map or even some more hidden secrets. Where it stands now, Goat Simulator 3 is one of those games you will probably play for a few days before moving on to something else. You might return to your goat life, but probably only a few times a year when an update is released that adds something to the world.

Goat Simulator 3 is a game packed with strange and unusual activities for you to participate in. For the most part, this game is extremely entertaining and worthwhile if you have a friend or group of friends to play it with. The crazy clothing abilities, satirical comedy, and over-the-top minigames will keep you amused for a while. Unfortunately, the game is very short and it won’t take you long to get through everything. Once this happens, Goat Simulator 3 becomes another one of those games that you might jump back into whenever an update happens or when you can’t think of something else to play.