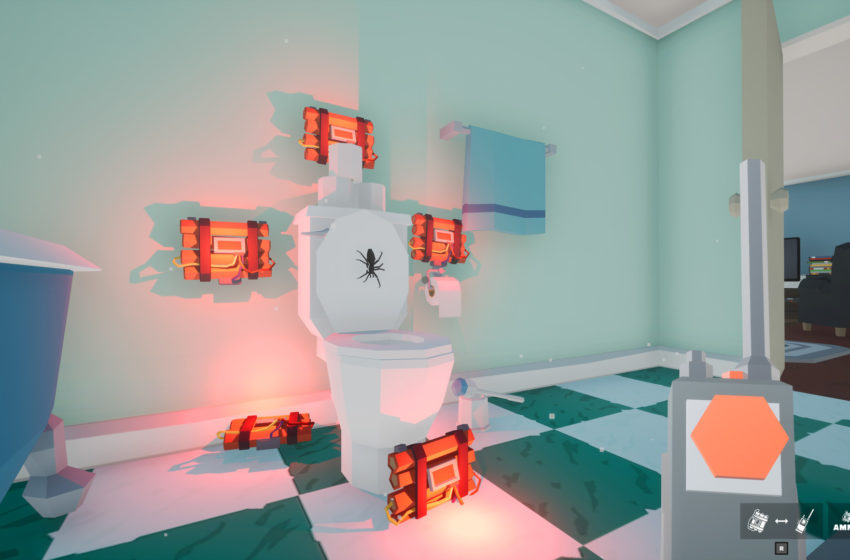 Spiders split opinions like no other. They’re not inherently evil, and they are fascinating creatures with plenty of cultural representation, but for many people, glaring at a spider as it slowly descends from the dusty window frame is akin to their life flashing before their eyes.

But what do you do when a spider infestation strikes your home? You can’t flush all of them down the drain. They’ll just climb back up. Indie developer Casey Donnellan Games has created a solution to your arachnid-shaped phobia without torching your house in the form of Kill It With Fire, a short but sweet first-person chaos simulator devoted to decimating the planet’s eight-legged cohabitants.

Bring out the big guns

The core gameplay here is exactly what it sounds like: killing whatever crosses your path, often with fire. To go about your killing business, you have a variety of weapons at your disposal, including guns, explosives, and even a hedge trimmer. Gadgets can also assist you, and they vary from the useful “S.P.I.D.A.R” radar to a silly reflex scope for your clipboard, which you can swing to beat encroaching creepy-crawlies.

As you go about completing each level’s tasks, spiders will burst from their hiding spots and seek to escape the fiery wrath of your flamethrower. Accompanied by a score of intense string screeches and harsh piano crashes, rampaging spiders will cover the ground in an attempt to fluster you, giving them time to hide.

These are not your average spiders either. Some will spawn with special abilities, such as a stealth coat that requires your concentration to spot them or the ability to spit webbing at you to impair your vision.

For better or for worse, some weapons in your arsenal are more useful than others. As cool as a shuriken is to use, for instance, you must be incredibly precise with them to hit even the biggest spiders. Meanwhile, the aerosol spray flamethrower, obtained in the game’s very first level, torches everything within seconds. As all spiders are vulnerable to fire, it actually makes killing them a little too simple. You can be creative with kills, but there’s little benefit to it in-game beyond self-amusement.

The game only has eight full levels, with an extra acting as an epilogue. Most of the levels can be fully completed in about 25 minutes, and that’s assisted by a frustratingly slow walk speed. It gives the spiders a fighting chance, but it almost feels like it has been used to artificially slow down the game’s pacing.

Throughout each of the game’s levels, you are tasked with completing a clipboard list of scattered objectives that range from killing a certain type of spider to solving riddles by placing objects in their correct place. Some objectives require more thought; for example, one level in a convenience store tasks you with scanning 10 items to the value of $100, and it’s up to you to find items that will scan for that value amongst your crypt of torched spiders.

As you explore the level, you’ll find more pages of the clipboard stashed about, offering additional objectives nearby. There are also hidden areas tucked behind foliage that can be fun to track down, and batteries stashed throughout levels act as collectibles, many of which are smartly disguised.

After completing a level’s objectives, you unlock the Arachno-Gauntlet, flooding the area with spiders, and it’s up to you to use the level’s unlocked weapon to take down a certain number within the time limit. These can be fun but are a little too easy to complete. It’s especially disappointing that they were changed from the pre-release demo version of the game, where they posed more of a challenge.

Thankfully, Kill It With Fire’s main attraction is very satisfying. Hearing the squish of death as you fire your double-barrel shotgun down the throat of a jumping spider is exhilarating. The jovial tone is matched by the graphics too, with simple textures and bright colors lighting up the game’s various environments, making those dastardly spiders easier to spot.

Ultimately, Kill It With Fire is an enjoyable puzzler. For those who hate arachnids, it’s a cathartic experience, and its light-hearted silliness works in its favor. It’s not particularly difficult and can be fully completed in about four hours. It’s also tough for me to say whether it’s capable of triggering issues linked with arachnophobia, so if that could be an issue for you, we would advise to approach the game with caution.

With that said, if the idea of blasting an RPG into a group of hairy insects sounds like fun, then look no further, because Kill It With Fire is burning down the house.

Gamepur was provided with a copy of Kill It With Fire for review purposes.