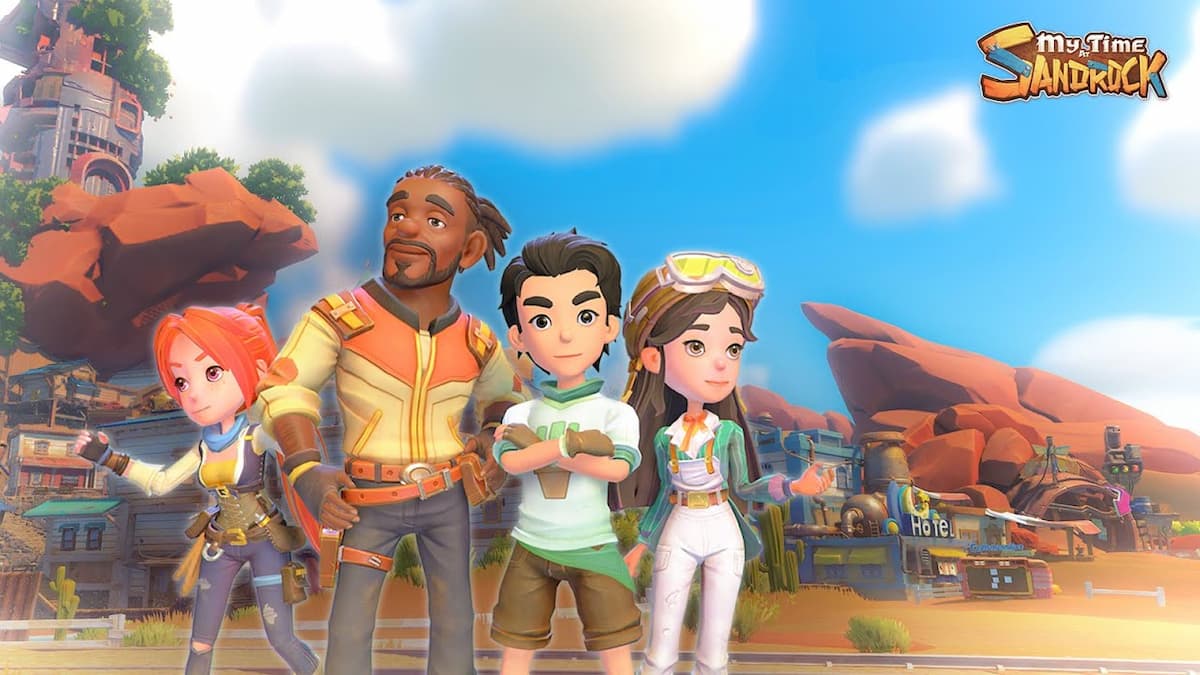 My Time at Sandrock is a tough nut to crack. It dabbles in a little bit of everything. You’ll do farming, building, tending livestock, and business management while completing timely commissions for the citizens of Sandrock. These features meld well and can feel enjoyable, but they sometimes don’t click correctly. After accepting specific commissions, it becomes a hectic grind to complete these tasks while you search for scarce resources in a desert. The problem with grinding is that you find yourself limited to a finite number of tasks within a day.

The grind becomes a dash to complete things quickly, and it’s easy to overestimate yourself. Unfortunately, these limitations ultimately ruin how all the activities blend, making Sandrock a rocky experience on top of the expected Early Access woes that need some sanding down.

A little bit of everything

When you first begin your journey in Sandrock, you become one of the town’s new Builders, and you primarily focus on construction projects for the citizens. You bounce around between the desert, the salvage yards, and the ancient ruins searching for resources to bring it all back to your Workshop to refine for your final designs. It’s satisfying to deliver a completed project to a client, but having to find them in town rather than sticking it into a completed order box eats away time, which is precious in Sandrock.

As you progress through the main story of Sandrock, you unlock the laborious task of farming. The prospect of agriculture in the desert is an understandable challenge. The most precious resource is water, and all of your construction tools need it to operate. When farming becomes available, you have multiple ways to receive water and make it available at your Workshop, turning it into a side activity to tackle when you’re ready.

However, the build-up takes a good deal of time to reach. Consequently, these tasks become a chore until you reach that point. Everything feels like a chore because of how stamina ties into nearly all activities you do in Sandrock.

Nearly everything you do consumes your character’s stamina. You use stamina when you dig holes or cut down cacti, investigate junk piles, enter combat, and go Sandfishing. This mechanic holds back your gameplay at the start. It feels like a harsh cap to keep you ahead of where the game wants you.

In a time where survival crafting games like Valheim and V Rising exist, there could be better ways to cap a player than stamina. V Rising is a good example, where a third of the available day is daytime, potentially harming the player when they go into the sunlight. However, you can still utilize that game time by roaming around and entering combat, albeit more carefully to avoid the sun. Stardew Valley also approached it better by not using stamina in combat and making it easier to replenish. Sandrock feels far more limiting.

When you run out of energy, your options include sleeping to regain it the next day or roaming around Sandrock to learn more about the citizens. You can increase your relationship with these characters by learning their likes and dislikes, and eventually finding a partner among them. These mechanics are fine but typically fall to the backline when you have several other timed events centered around your Workshop.

Like many other Early Access games before it, My Time at Sandrock needs some sanding down and plenty of polish. If you’re planning to jump into the game when Early Access launches, prepare yourself to deal with misaligned animations, broken quests, and having to save often to ensure you don’t become stuck.

There were two notable times I found myself stuck during quests. The first was when I had to speak with an NPC. My character would stand next to them, waiting for them to interact with me, and they never did. As a result, I had to close down the game and restart the cutscene forcibly. However, even restarting it didn’t help as the same thing happened again, forcing me to avoid the quest entirely. Thankfully, it was a side quest and did not prevent me from advancing the main story. The second time I had a quest item go into my inventory, but it never showed up in my inventory, preventing me from advancing another side quest.

Those two quest problems were the most significant issues I had, alongside the occasional animation problem. My Time at Sandrock is relatively smooth, but anyone interested in the game should undoubtedly recognize this is not a finished product. Many more features will release during Early Access, such as having children and creating a family, multiplayer, and more main story quests.

The Early Access of My Time at Sandrock is a solid framework for the developers to work on their way to an official release. The game could use more polishing and bug testing to ensure the side quest problems don’t occur. However, the stamina problems could turn off more casual players, which could continue even if the game receives the required polishing. The issues surrounding stamina might go away with multiplayer, but as a single-player experience, it’s overbearing. The overall stress of limited-time commissions and timed events builds even more with the struggling stamina.

Multiple features return for those who enjoyed the first game, and the developers build on an already solid formula with some engaging twists. If you’ve played Stardew Valley or other life simulation games, you may want to wait until the official release to check out the final product.