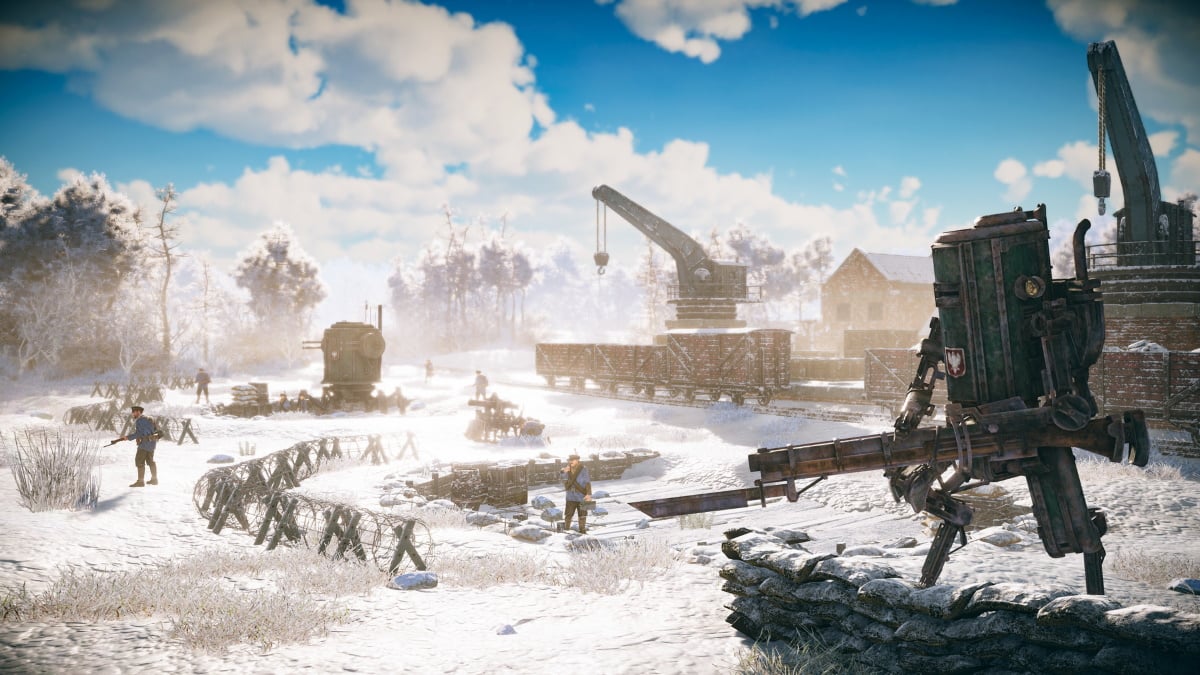 There’s nothing more menacing for a small squad of infantry troops with 1920s rifles, hiding behind a rock wall, than watching a towering, gas-chugging mech come straight at them. Except maybe the sound of the mech winding up its massive chain guns to rain down a barrage of heavy-duty bullets.

Luckily, another mech bursts through the forest and comes to the infantry’s aid, flanking the attacking mech and cutting it down to scrap metal. Moments like these are typical in Iron Harvest, the new real-time strategy indie game by KING Art devs out now for the PlayStation 4, Xbox One, and PC on Steam.

Iron Harvest’s gameplay mirrors the RTS classic Company of Heroes, where you move around small squads, position them behind defensive points, or inside of homes, capture resource points, and construct buildings to develop more squads. Units have various weapons and tools at their disposal, gaining new abilities as they level up. Yet, all of that build up and strategy can be thrown out the window with a carefully placed heavy mech that rips through the lines. While quite fun, these machines can cause jarring results, but you can still manage to seize victory if you coordinate a way to counter your enemy correctly.

When it comes to the gameplay, the giant mechs steal the show. You always want to use them in combat. Unless you have an overwhelming force of infantry soldiers, they mostly win. Like in Company of Heroes, your infantries’ positions matter, and placing them into cover prevents them from taking heavy losses. Unless the giant robot smashes your trooper’s cover using their massive firepower or crushes it to bits.

The upside is that there’s always a way to counter mechs. For instance, the Grimbart is a heavy robot, capable of making short work of infantry squads, but it won’t last long against a cannon or heavier guns. None of the combat is overwhelming, especially when you learn what your enemy has. But properly countering an enemy usually comes with the cost of losing a few troops in the process.

The story sets up a great way to learn the game, with a nearly 30-hour campaign across three factions. You can repeat missions and increase the difficulty, and when you want to try something new, there are a handful of challenges and skirmishes available, letting you test your skills against a tactical AI. While fun, it leaves you wanting more, and there are only so many multiplayer maps you can play with friends, far fewer than you’d expect to see given the size of the campaign.

Much like Company of Heroes, the primary focus for Iron Harvest is the single-player campaign where you play through several missions as three warring factions. Developer KING Art filled it with gorgeous cutscenes that greatly surpass the in-game graphics, and there’s decent dialogue throughout it. Once you complete it, you can dive into several multiplayer maps to play against others online or alongside friends against the AI.

The story focuses on how particular characters handle the modernization of the world around, the escalating destruction of warfare, and how mankind can live alongside in a modern era. In the game’s world, engineers developed large mechs and diesel-powered robots during the Great War, and they became standard war machines.

It’s enjoyable enough to play through, but many of the would-be hard-hitting story beats falter like a lousy popcorn flick. You care for a second when plot twists happen, but after that, it’s back to smashing everything as a giant robot, as if nothing has changed. I had hoped the main characters would serve a greater purpose than simply having more health and special attacks on the battlefield, but they primarily beefed up units. Granted, controlling a sniper who sicks a bear companion on enemies is quite enjoyable.

Iron Harvest bravely follows in the footsteps of Company of Heroes and carefully aligns itself with the genre before creating its own path with unique twists. Sometimes those twists don’t quite stand on their own, and the overall gameplay can feel one-sided when a situation doesn’t go your way. Yet the appeal of two mechs shooting it out in a 1920s town or the middle of a snowy forest never dies. With a few more updates, Iron Harvest could be something really great, and quite fun for LAN parties.