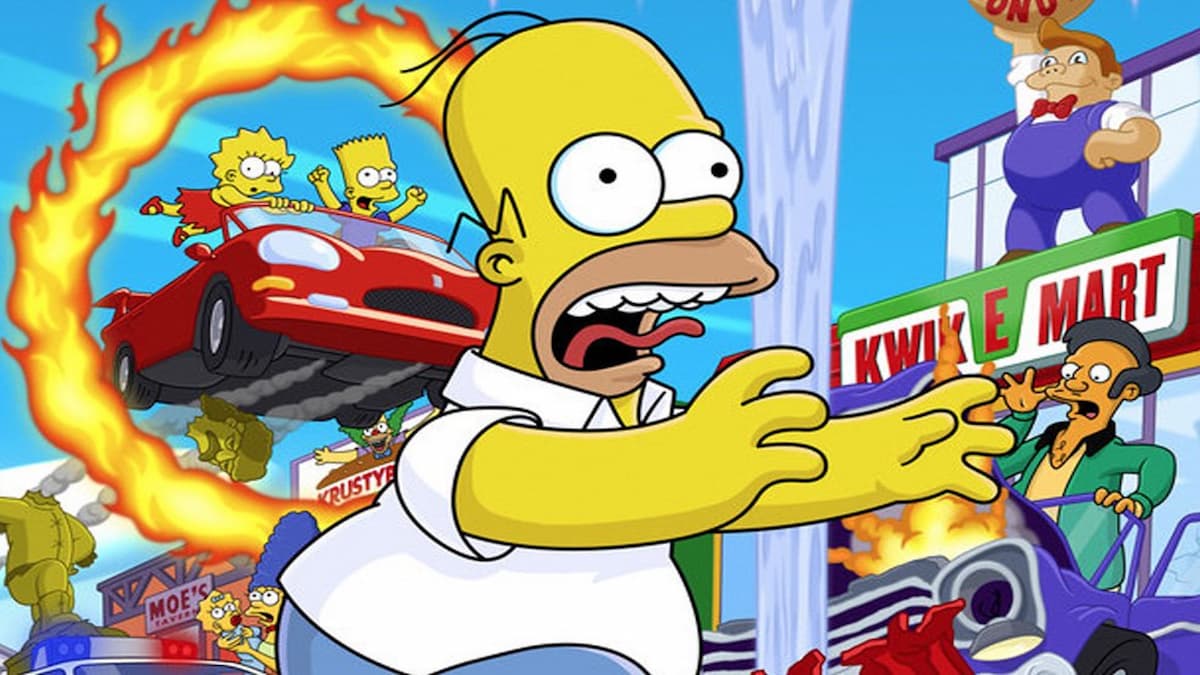 Think of all your favorite video games from the Nintendo GameCube, PlayStation 2, and original Xbox days. The odds are that most of them have made some kind of return lately, whether that is through a remaster or a sequel. When even SpongeBob Squarepants: Battle for Bikini Bottom makes a comeback, you can tell this era of games is heavily in demand. That said, there is a massive yellow-skinned hole that deserves to be filled.

The Simpsons: Hit & Run is one of the earliest and best Grand Theft Auto clones. It came out during a time when licensed games were plentiful and almost always terrible. A potent exception, Hit & Run not only made an engaging Springfield to run around in, but it also maintained the series’ comedic writing of the average modern day family, only in a cartoony world. It was probably the closest we ever got to a game feeling like you are playing the show.

A day in Springfield

The Simpsons: Hit & Run starts with a typical day for Homer and later allows you to take control of the rest of the Simpson family members, as well as Apu, in chapters that feel like episodes dedicated to that character. From Lisa investigating the disappearance of Bart by disguising herself as a cool kid to Homer having an entire Treehouse of Horror-like section, Hit & Run is as dedicated to its source material as South Park: The Stick of Truth.

The game starts with Homer sleeping on his couch while watching TV when a wasp with a camera flies into the living room and wakes him. Krusty the Clown is endorsing a new pop, called Buzz Cola, and Homer has a craving for it. What starts as a simple quest to the Kwik-E-Mart for Buzz Cola and a dessert for Marge turns into a journey throughout all of Springfield—driving through the nuclear plant, entering Springfield Elementary, and finding all the environmental nods to the show you can see along the way. For example, the most noticeable one in the early portions of the game is finding Jasper Beardly frozen in the Kwik-E-Mart freezers.

Almost 20 years later, a remake could add so many more references. The show may not be as mainstream as it used to be, but it’s still very popular. Anyone playing would take a little bit to enjoy a memorial to the late Marcia Wallace, the voice of Edna Krabapple, for example. The game already has character skins that are pulled directly from episodes, so seeing how many more they could draw from over 30 seasons of content would be exciting.

A game as smooth as Bleeding Gums Murphy

The Simpsons: Hit & Run does not really require a ton of improvements aside from the obvious jump in resolution. The gameplay largely focuses on traveling the world in vehicles and finding secrets along the way. While you can walk, that’s not really the focus here unless you explore smaller areas and get out to talk to characters. You spend so little time running around that a development team would need to focus on is making sure the driving physics feel as good as they did 19 years ago and that there are as few bugs as possible. Obviously, game development is much more complicated than that, but the blueprint for a great remake of a cult classic game is here.

Looking at the game’s graphics shows that the art style has held up since its original release. If a team wanted to update it, just throw a little cel-shading into the character models and the world, and you have a game that looks closer to The Simpsons Game from 2008 and the show while still in a 3D environment. Even if they wanted to stick to the original game’s look, many people would love that. While a proper remaster definitely would look different, I recommend checking out reubs’ fantastic looking fan remake of Hit & Runs. Obviously, having a full dedicated development team to work on new models and textures will look and play better than a fan pulling assets from the internet, but this is a good idea of what the game could look like.

A remake of The Simpsons: Hit & Run would be hotly anticipated by longtime fans, but it could also breathe a little more life into the Simpsons name again. Disney has been very open to outside game developers working on their properties lately. Now that they own The Simpsons, anyone could step in and ask for a chance to remake this classic game and have tons of people screaming, “Woo-hoo!”