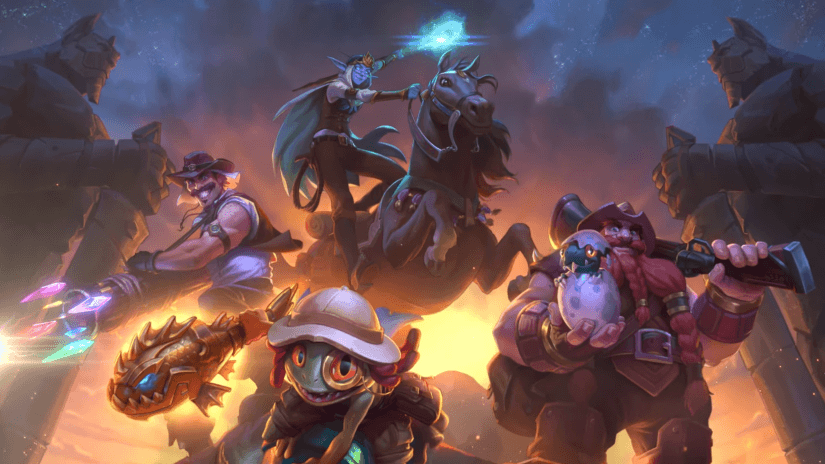 ith the launch of Saviors of Uldum nigh, it’s time to start thinking about what new decks you might want to build. Particularly for free to play players this can be a daunting task in any card game’s new expansion: sorting the wheat from the chaff, the must-haves from the situational, and the deck defining from the overrated.

It’s always hard to tell what cards are going to be amazing before people have had a few weeks to experiment, but in some cases, some cards are so good, and so generally useful that they stand out as obvious picks. The Boom Project’s Zilliax is a good example, a Neutral minion so useful in every situation that it’s run in almost every deck.

So let’s go over this set’s equivalent to Zilliax first, a similarly bonkers Neutral minion, before moving on to class cards:

Siamat is a flexible card that slots into any deck, and something any player would be lucky to have in their collection. While its most practical and common use is likely to be as removal (choose Divine Shield and Rush, or Rush and Windfury to remove two smaller minions), in a pinch it can also be used as stall (Divine Shield and Taunt) or as pressure in a “win more” situation (Divine Shield and Windfury).

The card is insanely good for the cost just in its text, and that’s not getting into its generous statline for the power of the Battlecry and the fact that it’s an Elemental, which is relevant for certain synergies.

If you craft no other card this set, craft Siamat: you will use it in pretty much every deck you build.

Honorable mention goes to Zephrys the Great, which has an insane (if very complicated) effect, but is far more deck dependent. It’s not quite a “must craft” card, but it’s worth considering for someone with a lot of extra Dust lying around.

Now on to the class cards. These are not necessarily going to end up being the strongest cards in the set, but they’re all cards I view as being safe bets; even if they’re not meta defining they will make your existing decks stronger. Unfortunately, not every class gets one of these cards. Mage, Paladin, Priest, and Warlock, in particular, stand out for not getting any cards I’d say are “must crafts” unless you’re a hardcore player of that class in particular, but there’s still plenty of goodies to go around.

The Druid Quest (Untapped Potential) and the cards that go along with it are likely to be very powerful, but it’s always a gamble when banking on cards with big payoffs like that. Do you know what’s not a gamble? A 0 mana 3/5 Taunt, which is essentially what this is. Almost any Druid deck is going to want to run this, both slower decks and even the hyper-aggressive Token/Treant Druid archetype, which is going to slam down The Forest’s Aid and this card on Turn 8 like clockwork a lot in the coming days.

There are several other standout cards in Druid this expansion that are as generally useful (like BEEEES!!!), but the amazing part about them is their Common rarity; you’ll probably be swimming in duplicates of them within a few packs.

Midrange Beast Hunter is already an insane deck and has been for a few expansions now. It’s also cheap to build, containing only one Epic and one Legendary card out of the bunch (and about a third of the deck are Basic cards everyone gets for free to boot!). Secret Hunter is likewise already a good deck, though more expensive.

The sheer value of this card makes it a perfect fit for the latter, and I expect the former will also be warped a little bit to include it, it’s just that good. You play a hard to trigger Secret like Rat Trap and then slam this down on Turn 4 every game you can manage it. The great thing about Rat Trap particularly is you either get a 2 mana 6/6 if your opponent triggers it or get this 4 mana 7/7 if they don’t; it’s a win/win!

This card is almost certain to see a lot of play in many Hunter decks.

The “Year of the Rogue” continues with even more goodies for our favorite backstabber. But of all the great cards Rogue gets this expansion, the quest stands out as one of two “sure thing” quests revealed. The reason being it takes almost no effort to complete this quest, and it has almost no drawback.

For most classes losing their turn 1 play can be devastating, but Tempo Rogue (still a top deck even post-nerf) and the various Burgle/Thief Rogue variants stand out by almost always skipping turn 1 anyway, and relying on taking back the tempo on turns 2, 3, and 4.

These decks already run cards that play into the quest and have room to cut one of the weaker cards to make room for the reward.

Unlike the Druid, Shaman, Mage, or Paladin Quests (the others I think have potential, however slim for the latter two) the Rogue Quest stands out by not requiring you to warp your deck around it at all. It just cleanly slots into existing decklists for a huge upside.

I was very close to putting Corrupt the Waters (Shaman’s Quest) here but talked myself out of it. It will almost certainly be good, but if it ends up not being great, it’s a wasted craft. Vessina, on the other hand, might not reach the heights of deck defining awesomeness that Corrupt the Waters probably will, but will certainly be an easy include into several existing decks, and be a generally good card to play in Shaman.

In the existing Murloc and Aggro Overload archetypes for Shaman, Vessina is essentially a third copy of Bloodlust, a card those decks love to have more copies of, except it comes with a 4/6 body and is repeatable when casting spells those decks run already (like Lightning Bolt and Lava Burst).

The only way this card would end up being bad is in the unforeseeable circumstance that aggressive decks are somehow shut out of the meta, which I don’t see happening this expansion.

These are, I think, the five best cards this set has to offer and if you have any interest in playing the classes these cards go to, I wholeheartedly recommend crafting them. I thought about putting the best card from each other class on here (for a short rundown, Flame Ward for Mage, Subdue for Paladin, High Priest Amet for Priest, Evil Recruiter for Warlock, and Frightened Flunky for Warrior). However, four out of five of those cards are commons (so you’ll be swimming in them), and Amet is a bit of a gamble on Zoo Priest, in particular, being good; it’s not as generally useful or able to drag a deck out of nothing like the cards on this list are.