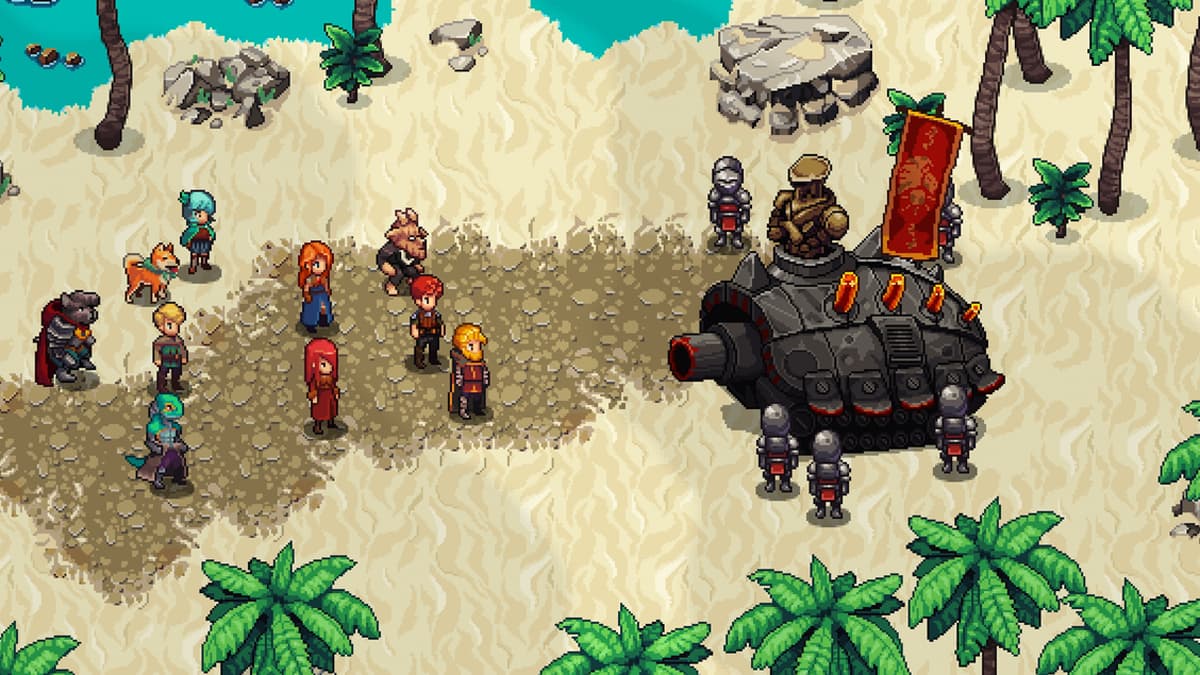 In the 90s, games such as Final Fantasy VI and Chrono Trigger were popular RPG choices. Whether you played them or not, you had definitely heard about them. Cut to today and Chained Echoes could be their modern equivalent with the potential for such remembrance. With its similarities with the aforementioned titles, retro 16-bit looks, thrilling gameplay, and stellar soundtrack, Chained Echoes by developer Matthias Linda might scratch a certain nostalgic itch.

Games that aim to evoke that sense of nostalgia of classic RPGs have a lot in common. The formula for making a great and memorable game in this genre can typically be boiled down to a few key elements: heroes standing against evil, a party of unique characters, and a vast world with a branching storyline. Chained Echoes fits the mold rather well in all regards. Its evocative use of simple, yet stunning visuals blended with a well-rounded soundtrack and fast-paced battle system feel fresh while paying homage to the games that inspired it like Golden Sun. The opening few hours of Chained Echoes felt like bathing in Golden Sun’s rays once more — both it and Chained Echoes understand character development and bring each one to the front of the story. Chained Echoes’ Glenn and Lenne reflect Golden Sun characters Isaac and Jenna in battle prowess and personality.

Chained Echoes is a 16-bit adventure game and it feels right at home as a present-day release. It’s a game that has all the qualities of a fan-favorite remaster such as Grandia and one that sits great alongside newer titles such as Octopath Traveler. It provides all the sentimental feeling of diving into the mentioned well-loved titles, so it’s no wonder that Chained Echoes feels, looks, and plays so well.

Chained Echoes takes place in a fantasy world that includes elements of science fiction. Magic is present in the form of mages and their grimoires, and mythical beasts roam the wilderness. Adventurers rely on swords and katanas, but paired with more technological equipment like “Sky Armor,” reminiscent of Fallout’s Power Armor, and airships that coexist with magic to create a unique vibrant world full of wonder. Together, the two play a major part in battles and exploration as you traverse the vast world and get entangled in a plot of political intrigue, assassinations, and party dynamics.

Related: The 10 best JRPGs of all time

It wouldn’t be an RPG without a memorable cast of characters at the heart of the game. You control a party of up to four characters at a time; however, you aren’t restricted to just four. Chained Echoes uses a clever system where you can choose party members as they become available. Under the formation tab, you can change who you want to have as the main four members. For each party member, you can set a secondary member that can be used in battle, effectively allowing you to swap between two parties worth of characters as needed.

A great battle system is another key part of the RPG formula, and Chained Echoes understands the concept well. While there is a lot to keep track of when it comes to stats and skills — which is not uncommon for an RPG — learning the ropes is simple. Fights are turn-based, and characters with higher agility stats will act first. Characters come with their own skills and abilities that, when used, build up a special meter called the Overdrive Bar. It’s similar in concept to the brave and default system from Bravely Default. Keeping it in the green increases your attacks, but moving it to the red will cause enemies to hit harder.

Characters can be magic users, martial specialists, ranged combatants, and rogues. There is a full roster of classes to find, but there really isn’t a typical class system per se. Choosing a class comes down to finding items called Class Emblems around the world at Statues of Leonar. They include classes such as Cleric, Shaman, Warrior, and so on. Equipping them to a character will increase certain stats, so choosing wisely is key.

Fights can be encountered in one of two ways: the first comes from random encounters found throughout the map; the second is by approaching an enemy at your own peril. As the story progresses, you’ll gain access to Sky Armor. The heavy, bulky, and amazing-looking armor provides extra protection and is useful for mobility and fighting against difficult and larger enemies.

Chained Echoes has that quintessential look and vibe of a classic RPG, and it certainly plays like one too. The soundtrack and visuals bring the game to today’s standards while the gameplay and mechanics feel novel yet familiar.

Matthias Linda may not be a household name, but it soon may be. Chained Echoes was designed and built by a team of one, and Linda certainly knows how to deliver the RPG experience. Chained Echoes is a pastiche that fits nicely alongside games of its mold; if you’re an RPG fan in the mood for a certain feeling of nostalgia, don’t let this 16-bit charmer fall through the cracks.