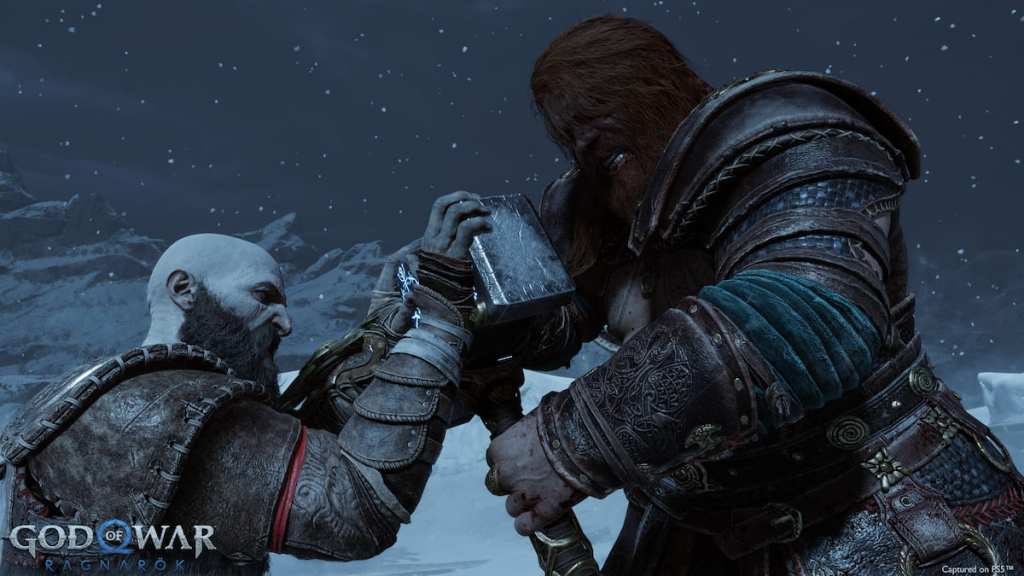 After some years and a cliffhanger that feels like it came from the latest Marvel film, Kratos and Atreus are back in God of War Ragnarok. This sequel follows a calmer, fatherly Kratos and an impatient, teenage Atreus a few years after reaching the peaks of Jotunheim and stumbling across a bleak tease of their future. They live with Mimir, surviving in the cold, bleak Fimbulwinter onset by the death of Baldur. After spending some time playing Ragnarok, the focus on action and combat depth while maintaining the same core cast and chemistry reminded me of classic action film sequels more than anything else.

Films like Terminator 2: Judgment Day, Rush Hour 2, and Bad Boys II are classics that focus on evolving the action but maintain chemistry between their lead characters. I’d be pressed to tell you what Lee and Carter were doing in Rush Hour 2, but it didn’t matter. The dynamic between them, alongside their growth and camaraderie, pushed that film forward, as Ragnarok takes those lessons to heart.

Related: New God of War Ragnarok behind-the-scenes video sets up the story if you didn’t play the 2018 game

Ragnarok has a firm focus on evolving the scope and depth of its action while keeping a razor focus on Kratos, Atreus, and Mimir to drive the narrative beats. 2018’s God of War spent a great deal of time building relationships and gradually letting players watch Kratos become a trusting father to Atreus and established Mimir as a stout companion after hours of stories and countless boat trips together.

Ragnarok, on the other hand, doesn’t need to spend time establishing relationships; instead, it focuses on expanding the world around them. You’re quickly introduced to new characters, friends, and foes alike. Brok and Sindri return with an expanded shop and their usual banter, while Freya is hell-bent on avenging her son’s death. The narrative quickly moves beyond Midgard’s barren, ice-cap mountains and into bright and bustling locales such as the Dwarven realm of Svartalfheim.

The criticisms of the previous entry were clearly a focal point in Ragnarok, such as the lack of NPCs and the homogenous enemy types. Enemy variety has expanded, with a robust assortment of humans, creatures, and mythological beasts that Kratos and Atreus must conquer. The Leviathan Axe and Chained Blades return, with new functionality built into each set of weapons. Kratos’s shield is now a full-on weapon and defensive tool as well.

Since Ragnarok starts you with many tools, it doesn’t hesitate to challenge your knowledge of those abilities. It isn’t long until you’re fighting a mixture of enemy types, balancing between ice and fire damage while calling Atreus to action all at once. It is a welcome change, but it can initially feel overwhelming if you’re new or rusty with God of War’s combat systems.

Once you get acclimated to the feel and pace of the action, the game opens up in significant ways. Ragnarok is a much more open and vertical experience than its predecessor, with the ability to leap off platforms with downward smashes or grapple up sheer walls to take out ranged units. The layering of action and complexity of your abilities make the action feel much more kinetic. It has the speed and dexterity requirements of a game like Ninja Gaiden Black.

Related: God of War Ragnarok exact release time – when can you pre-load and file size

To offset the increased complexity of combat, the team at Sony Santa Monica has made sure to include a vast and sweeping set of Accessibility options that will make the game a much more comfortable experience. They can cater to those who want to button-mash and focus on the narrative or to players who wish to focus on the action and spend less time on puzzles. The accessibility options cover a gamut of features, targeting vision, hearing, motion, and motor functions tailored to ensure a decent experience for players of all skill levels.

God of War Ragnarok addresses criticisms of the original by layering depth and nuance to its core strengths. Kratos and Atreus’s relationship is at the heart of the story, while the refined combat demands your full attention and tests your skill at every turn. I don’t know how it will end as of yet, but the chemistry of its leads and refinement of its action resembles a classic action sequel in the making.