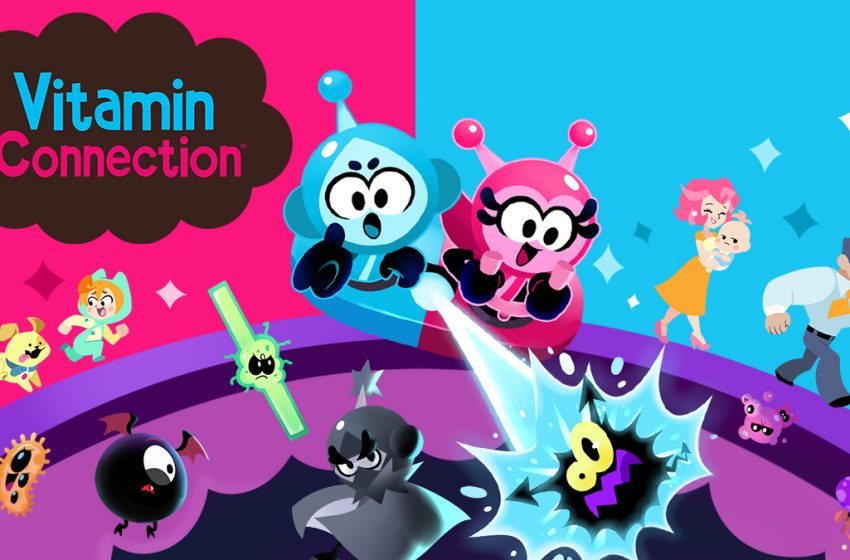 The people at WayForward are some of the more accomplished indie developers in the video game industry today. They have produced one of the best platformers on the market, the Shantae series, as well as other popular games like River City Girls, the Ducktales remaster, A Boy and his Blob, and more.

Vitamin Connection has an interesting focus on asymmetrical cooperative gameplay. How exactly does that work?

Player 1 and player 2 are working together, but each has its own distinct role, and even hold the Joy-Con controllers different from one another. Players will take on the roles of Vita-Boy & Mina-Girl, co-pilots of the Capsule Ship, which is actually just an ordinary, tiny vitamin capsule. Members of a family named the Sable family each swallow the vitamin to help recover from being sick. The vitamin then becomes the ship that you and your partner use to navigate inside of their body to defeat evil bacteria monsters using a Vitamin Beam, with the goal of helping the host feel better. And, for example, one player is firing the beam and the other is aiming it, so succeeding becomes a game of great coordination between the two players. If you don’t happen to have someone to play with, you can play the game solo as well, and it’s a ton of fun still.

Is there a better way to play, i.e. solo or cooperatively?

I’d be kind of hard-pressed to say one mode is better than the other—they end up being just really different experiences, and both have their strong suits. Solo is a blast because you can progress through the adventure and enjoy the game story at your own pace. Playing cooperatively is delightful, of course, because you can share the fun with someone else and have this experience of trusting each other and embarking on a journey together. It’s a great ice-breaker game for couples, and also really good as a family game, like for parents to play with their kids, for instance.

Will kids and people without a lot of gaming experience be able to pick up the controls easily? And will experienced gamers stay entertained?

Yeah, I think so. The roles are balanced out carefully with this in mind. It’s super simple to pick up and learn, and a seasoned player can carry a less-skilled player through the experience. Players often find they have a preference for one role they excel at, and swapping roles at any time is as easy as trading Joy-Con controllers with each other.

How did you guys come up with this idea?

So, as game fanatics, there’s quite a lot that we look to when drawing inspiration. I told the team I wanted to design a Katamari Damacy or Jet Set Radio sort-of game for a new generation of players. And these are totally different games from one another already, so the takeaway was more how can we make a memorable game that has the potential to become an instant classic that people will still talk about years from now.

For starters, the concept had to be strong. Something completely original and memorable that stands out among the premise of other current games. The visual identity, similarly, would have to stand out with something striking and fresh. Finally, the soundtrack would have to be killer. I’ve been listening to it for months now and I’m still in love with it, so it’s safe to say we succeeded on that front.

More than anything else, we’re always inspired by Nintendo’s own creations and wanted to make something that would really feel at home on Switch next to them. Thinking of what gameplay would work best for the console lead to the idea of piloting some sort of ship together, and with the two-tone colors of Joy-Con, the idea of it being a vitamin capsule popped into my head and it just stuck. We riffed on it from there, and the world of Vitamin Connection was established.

It seems like a game that was built for the Switch from the beginning.

Yes, that’s right. Vitamin Connection was made from the ground up to be a love letter to the Nintendo Switch as a console simply because we enjoy it so much and believe in the potential it offers for wonderful experiences. As a result, we take advantage of many console-specific features. Beyond the Joy-Con itself, we make great use of motion control, the IR Motion Camera in the right Joy-Con, and my personal favorite, HD Rumble. As you rotate the controller, you’ll feel this satisfying ratcheting sensation in the Joy-Con, and it’s super immersive.

It looks like the players will be traveling through the Sable family and their dog. How will the family members differ from one another?

Each chapter of the game is referred to as a “story,” and there are even 10 bonus stories to unlock. As you progress, new and interesting game mechanics will be introduced to the player to keep things fresh with every story, and you’ll meet this comical cast of characters that exist inside the body of each host along your journey. However, to say each member of the family has their own story would only be partially true. After healing the Sable family’s dog from the inside, the game storyline starts to subvert expectations a bit, and things get out of hand quickly.

How long do you expect this game to take to beat? Will playing cooperatively make it significantly easier?

We wanted to be really respectful of players’ time, especially as a cooperative game since we’re asking for the combined focus of two people. I suppose you could charge through the main journey in 4-6 hours if you were intentionally trying to race through it, but there’s a lot more content thereafter. Once you clear the game and the credits roll, you’re only halfway done, as the New Game Pro mode unlocks with a whole new playable character and a separate story line to enjoy. On top of that, you’ll be unlocking plenty of additional Sub-Game-related content to master as you play through the game. There’s quite a lot of game there; it’s a fantastic value.

How many Sub-Games are there? And do you have a favorite?

The exact, true number of Sub-Games is a secret, but we get extra mileage out of some of them by remixing the contents to make spin-off Sub-Games as well. As you unlock them, each gets treated as its own self-contained little game, complete with its own title screen.

It’s a bit difficult to choose one favorite, but I think Dance Festival might be my choice. It’s a rhythm game with a variety of songs that places the Capsule Ship amongst other ships. You’ll be provided dance steps for the ship, which you must follow closely to the rhythm when the music starts. If you play it just right, the result is sort of like a synchronized swimming performance with the other ships, twirling and gliding in unison, perfectly choreographed. Goof up the steps and you’ll bump into the other ships and make a mess of things pretty quick!

How did audio and sound factor into the development?

JM: The soundtrack to Vitamin Connection is one of the most ambitious WayForward has ever offered. What started as working with the local crew at Mint Potion Studios became an international collaboration in an incredible variety of musical genres. The game also has this cool dynamic audio feature where, as you move the Capsule Ship around in-game, you’ll hear it affect the music a bit. Similarly, firing the Vitamin Beam also alters the music that you hear. So, as you play through the game, you’re sort of remixing the song in a sense. It’s really satisfying! When you get Vitamin Connection, please pay special attention to the music and enjoy it to the fullest.

Vitamin Connection releases Feb. 20 exclusively on the Nintendo Switch and is priced at $19.99.

What is the release date for World War Z: Aftermath?