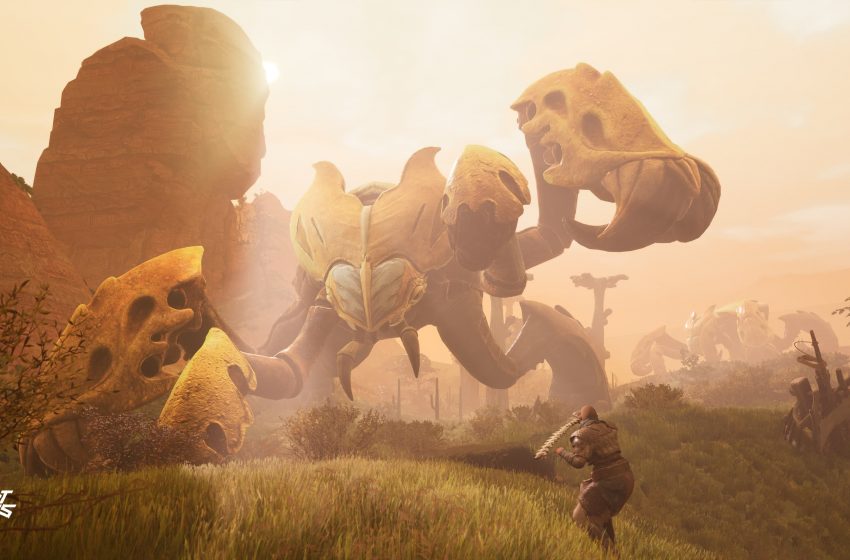 Last Oasis, the upcoming survival MMO from Polish developer Donkey Crew, has a major hook. The central draw of the game is Walkers, wooden contraptions that you build to navigate the world and fight. They can be small and fast, designed for general transport, or larger more complex machines, built to take on the massive monsters that inhabit the world, or perhaps some other players.

A game like this lives or dies based on how smooth it is for a player to stay on a machine that is rumbling over the landscape, and Donkey Crew has put in the time to make it all work. The Walker can trundle along underneath you as you run around the decks and you won’t bounce off. When we first got a sneak peek of the game, this was the first thing that stood out, and the developers told us that they spent well over a year working on that aspect of the game, making it as smooth as they could.

In Last Oasis, you play as a Nomad, an exile from the society that still remains after a cataclysm devastated the planet. The earth now consists of two hemispheres—one a boiling desert and the other a torturous winter—with a slow-moving strip of liveable land between them. It is this area that players will find themselves in, scratching a living from the land, fighting each other and the various creatures that inhabit it.

The world is broken up into different servers, forming one enormous world that all players inhabit. The world map is divided up into hexes, each hex representing a server with a maximum of 100 players. Traveling between servers is as simple as jumping on your Walker and heading for the border. It promises to be a potentially massive, dynamic world, with a constantly shifting population that ebbs and flows in the struggle for power.

Donkey Crew has decided to ignore food as a mechanic and focus instead on water, the most important resource in the game’s desert-like environments. Run out of water and you will die, so that becomes the main need that forces you to move around the map. You will also need to gather up all manner of resources and parts to build your Walkers, and this is where Last Oasis’ next neat trick comes into play.

The skill trees are driven by exploration, the act of doing represents that act of learning, and repetition leads to mastery. Basically, as you explore the world, find new things, and do new things, your skills will increase. Combat is skill-based, directional swipes of the mouse dictating the direction of attack, and a similar method is required to block correctly. You can’t just spam attack people to death, a combat outlook that is certainly welcome.

Walkers can go to war as well, equipped with all manner of weapons to take out other Walkers or the massive beasts that you can find lurking in the deep desert. There are multiple variants, allowing you to build within your means or tailor your group for specific tasks.

Your Walkers will be all-important, representing your guile as a solo player or your might as a clan, and you can safely hide them in the desert while you log off. Donkey Crew wants raiding to mean something, and not just have players be unable to defend what they have worked for because they needed to work or sleep.

Base building leads to hard choices. You can opt for stone to give improved defenses, but you’ll need to leave it all behind when you leave the area. Wood offers less impressive defense against attack but can be transported on your Walker to your next destination.

The economy will be entirely player-driven, allowing you to react and profit from the needs of different servers. Maybe your server is rich in something that is currently high value on the global market. You can stop and make some money, but if someone else has already laid claim to the area, you may need to fight to keep your profits.

The game also features a grappling hook, and no game in history has ever suffered from having gaming’s greatest tool as a feature.

Last Oasis looks like it will give all kinds of players an equal chance of success, as Donkey Crew wants both clans and solo players to feel like they have options to progress and profit within the game.

What we saw during the preview was impressive, and we left with the impression that Donkey Crew has a strong vision for their game and are very much aiming for a particular type of experience. It’s the survival MMO standard with some of the excess cut away, some interesting options added, and a greater focus on being able to protect what you’ve got and actively take what you don’t.

And, of course, massive Walkers to smash your enemies.

Last Oasis will be available in early access from Steam on March 26.