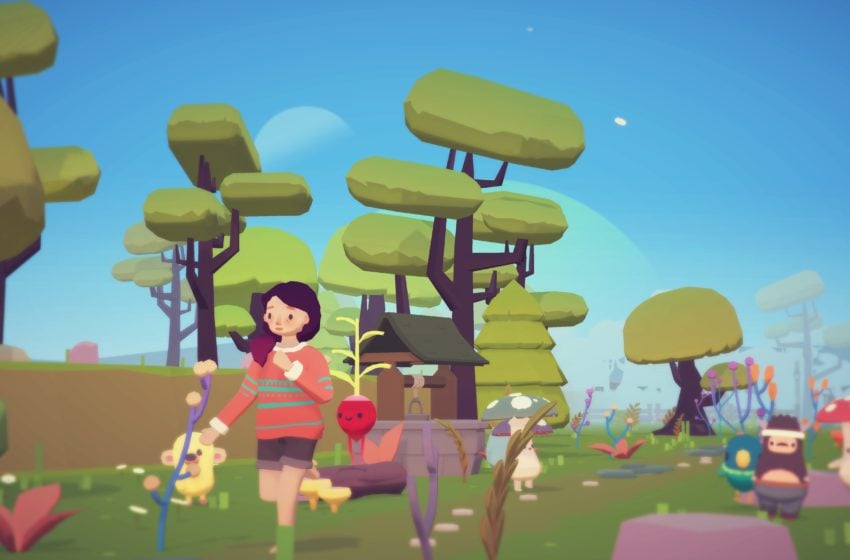 I’ve found myself in a quaint hole-in-the-wall town on Oob Island called Badgetown, where seconds ago I met a young teenager. She’s using odd words like “goshzookie” and wants me to use something called “nurnies’ to build things while I live there. It turns out this teen is, somehow, actually the mayor of Badgetown. It’s perplexing, and I’m questioning my life choices up to that moment.

But then, to my left I see, of all things, a smiling radish. It comes up to my hip, and its name is Radlad. With that, despite the bizarre place in which I stand, I get the feeling everything’s going to be alright as I set out on this new island adventure.

Much like the denizens of Oob Island, Ooblets is a mixed bag. At its core, you’re attempting to balance creature collecting and farming activities so they each benefit the other. It’s a bit like Stardew Valley, where you spend time in the field to cultivate various crops, but the Ooblet critters, an eclectic bunch of vegetable and woodlike weirdos that appear to be living inanimate items, serve as companions for you and everyone else on the island, providing a hint of Pokémon.

Developer Glumberland started work on Ooblets in early 2016, and it’s now come to early access on the Epic Games Store for PC and the Microsoft Store for Xbox One, with no subscription or pre-order required. Because Gumberland is just a two-person development team, you can bet it will be in early access for a bit. But that’s okay; there’s already plenty to do, like exploring the island, finishing daily tasks, or battling other Ooblets.

Despite some thematic similarities with Pokémon, the battle system is vastly different. Here, you dance-battle your Ooblets against others you find. Yes, you read that right. These silly battles are relatively low-stakes, and if you win, you receive the seed from the Ooblet you beat, which you can then use to grow that Ooblet in your garden. Each Ooblet has a standard, uncommon, and gleamy coloration, which is reminiscent of Pokémon’s Shiny system, but it’s far more forgiving and less time-consuming.

Low stakes is actually a good way to describe all of Ooblets. Everything you do is pretty low stress, and that’s part of the allure. It’s a casual adventure where you go around town looking for Ooblets seeds and giving them vegetables or meals created from ingredients in your garden in order to dance-battle them. It’s a fun loop that doesn’t demand too much of your brain power and doesn’t force you to think about how to best optimize your experience. You can spend an entire day working on your garden, or not. You choose how to spend each day in Ooblets, based on what makes the game the most fun for you at that time.

One thing to note is that while there’s a good basic framework in Ooblets, I was left feeling like there’s something missing — which is to be expected, since the game is in early access. But Glumberland is steadily updating the game with more features and content. For example, when I originally started playing, there was no way to release or trade an Ooblet. The game has only been out for a couple of weeks and the developer has already implemented a feature, albeit in a rudimentary framework, to address that issue. This proves how dedicated the dev duo is to their players, and to the future of Ooblets.

So far, Ooblets is a fun experience, especially when you go in knowing you won’t be able to dive too far into the deep end yet. Many of the features are things you’ve encountered in other games, but the oodles of personality in the game’s visuals, characters, and mechanics allow it to stand on its own, and it’s a blast to play.