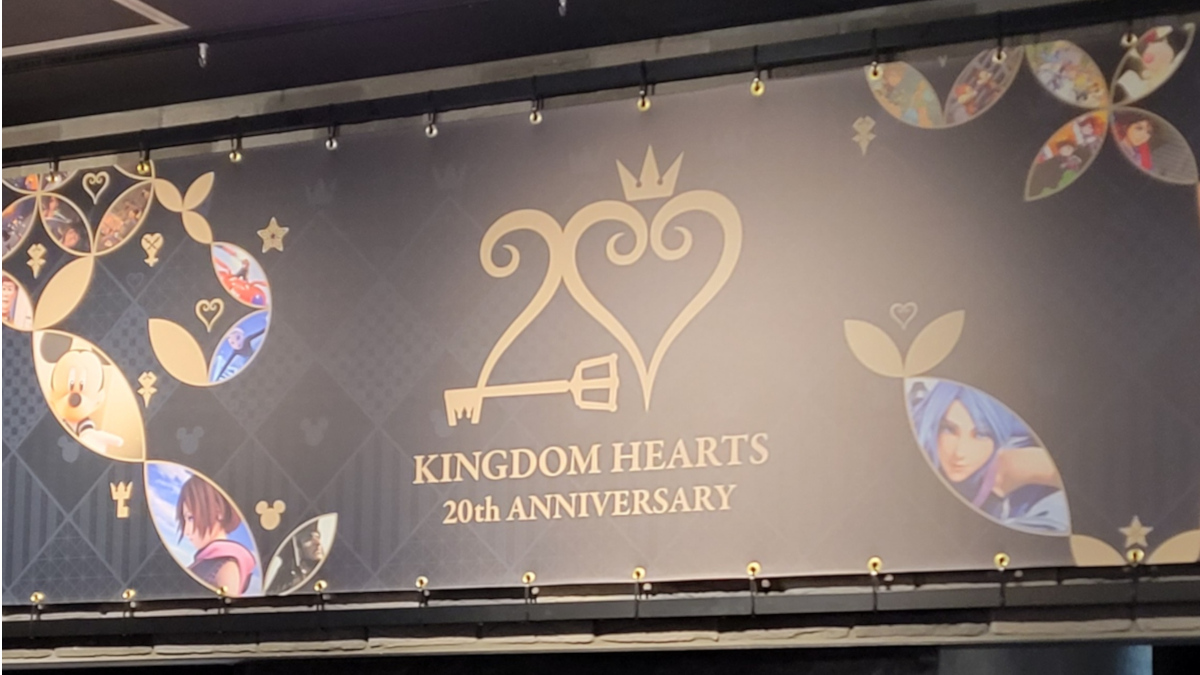 Every Kingdom Hearts fan remembers their first exposure to the series. Mine was reading a rumor about a possible Disney and Squaresoft collaboration project in Electronic Gaming Monthly, a now-digital magazine publication centered around video games. This was my first exposure to crossover products — I loved Final Fantasy, and I had a passing interest in Disney movies like Robin Hood and The Sword and the Stone, so I was excited. My family didn’t have a lot of money however, and also thought video games were a waste of time. As such, I was told to go mow lawns to buy a PlayStation 2 — so I mowed a lot of lawns. I’ve been a fan since then.

When Square Enix announced a 20th Anniversary celebration of Kingdom Hearts, including merchandise and a themed café, I wasn’t really sure if the café part would work out well. After all, the café was only set to be around for a month, and cafés that have a planned end date tend to not have good consumable fare. But this is Square Enix we’re talking about here — the Final Fantasy XIV “Eorzea Café” has some excellent lunches and drinks, after all. Surely this one will work out, right?

If you’ve lived in Japan for any length of time, and also are a huge dork, you start to realize when themed cafés are worth going to and when they aren’t. For those not aware, “themed cafés” refer to cafés centered around a product or franchise — Resident Evil, Final Fantasy, Dragon Quest and Gundam are but a few examples of franchises to get their own café. These “pop-up” cafés tend to not last long and evaporate after a few months, except for the aforementioned Final Fantasy XIV café, which has proved to be popular and profitable enough to stick around for several years.

Pop-up cafés are primarily a vehicle to push merchandise sales, and collectors especially love to buy anniversary memorabilia. Before we get to the café fare, I can thankfully say that the collectable merch is actually extremely cool. My personal picks were the Keyblade Silicone Ice Tray, the Character Omnibus, and this killer hoodie with Kingdom Hearts 1 art that I probably will never wear out of fear of damaging it. The merchandise was so popular that many items were low in stock or sold out entirely — RIP 20th Anniversary Coffee Mug, I really wanted you.

The café itself was a little light on the atmosphere — fancy artwork and signed pictures adorned the walls, while a few monitors played b-roll of Kingdom Hearts game footage. Tunes drifted over the café, featuring a random assortment of battle and overworld music. Everything from Deep Jungle’s overworld theme to Rowdy Rumble was played through, not sticking to one single game. The decorations were interesting to look at, but there were so few of them that what you’re seeing in the screenshots is pretty much it. Compared to the Eorzea café, which has Moogle statues, replica weapons, and plenty of FFXIV chotchkies to look at, the KH café felt barren.

The food served was, unfortunately, awful. Each meal was in the $12 equivalent range, but the portions were not only small, the food itself was bland. The Mickey Burger was a mess, and not in a good way — whatever relish topping they put on it was blander than broccoli soup. Literally, by the way — the Goofy Broccoli soup was actually the best thing on this dish. The Donald gelatin was nearly tasteless, if not for the whipped cream in the middle.

I figured that the soup must be better, but it really wasn’t. Shirataki noodles are typically pretty easy to put into any soup, yet mine were undercooked. The soup broth itself lacked even pepper, let alone any other sort of spice. The bread, which was cutely emblazoned with the picture Sora drew of sharing a paopu fruit with Kairi, was the best tasting thing on this plate. I’m not joking when I say these dishes gave me food poisoning. After this second strikeout, I decided to (wisely) move on to trying the drinks.

The drinks on offer were thankfully delicious — not everything shown on the website was available, as they split the café’s month-long existence into two sections with different offerings each. I attended the early portion, so my drink options were limited. The Nobody Soda was a wonderful blend of cider and blueberries, and the Twilight Town drink was a delicious orange and mint concoction. The Destiny Smoothie was unfortunately a little too much crushed ice, but the blend of watermelon and pineapple was tasty. I topped it all off with the King’s Castle, which was a fantastic blend of blueberry and lassi, and easily was the best choice of the four.

After paying for the check and briefly sticking around to watch the b-roll some more — they were showing the Hydra fight from KH2 and I had to stop myself from saying “GET UP ON THE HYDRA’S BAAAACK” — I had to really consider what it meant to be a fan of something. Loyalty to a series that has genuinely changed peoples lives doesn’t necessarily mean loyalty to everything involving it. I got to experience a dream of many people, yet I couldn’t help but feel like I wasted my time. Did that make me less of a fan?

This experience really just cemented what I knew deep down in my heart and chose to ignore out of love for Kingdom Hearts — most themed cafés are terrible experiences. They’re cool novelties, but usually don’t hold up as worth the price. The great drinks didn’t make up for the KH café’s lack of atmosphere combined with the subpar food. Sure, the merchandise is cool (I will love and cherish my hoodie and ice cube trays forever,) but merchandise can be bought usually after the fact. I took a three-hour train to get here, and felt like it wasn’t worth the trip. I can’t imagine a mega-fan traveling from the UK or the US experiencing this and coming away happy without doing some serious mental gymnastics to justify it. Sometimes being a fan means knowing when something you love has disappointed you.