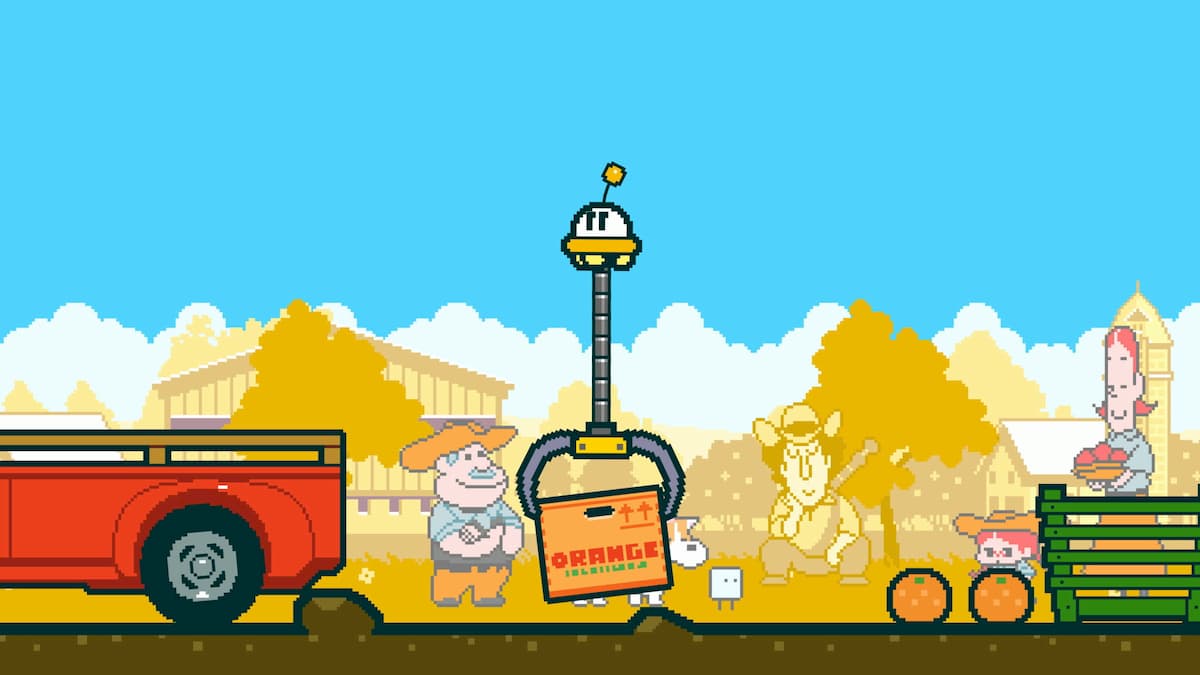 One fun thing when writing about video games is that you often end up playing something that you may not otherwise have experienced, and it turns out to be a really pleasant surprise. After a long time focusing on shooters, fighters, brawlers, and sprawling MMOs, Part Time UFO’s pleasant and cute puzzle-solving feels like sherbert on the brain.

Part Time UFO has arrived on Nintendo Switch after a very successful launch on mobile devices in 2017. Developed by HAL Studios, which has worked steadily with Nintendo on Kirby and Smash Bros., the Switch port of Part Time UFO is undoubtedly the best version of this wonderful game.

You play as Jobski, a tiny alien craft who arrives on earth and finds themselves in need of employment. The logical solution is to take a bunch of odd jobs, helping people out on the farm, in museums, at schools, and various other sites where things can fall over and need to be stacked up again.

Each level has a main goal and some side goals. If you finish them all you get medals, and earning enough of those will open up new levels. The challenges to earn those medals are occasionally obtuse, with only the vaguest hints about what to do, adding depth to the puzzles. The physics, while not wonky, are certainly designed to add difficulty and fun, and it will take a deft hand to pull off some of the challenges within the time limit. You’ll need to pick things up and put them down very carefully, in the correct order, and in the right places. If it sounds simple, that’s because it is. But it’s also addictive, challenging, and enjoyable.

If you have already played the mobile version, there is still actually quite a lot to experience here. A new endless mode provides lots of potential new content as it challenges you to stack random objects as high as you can. You can play through the entire game in co-op mode, and there are even a couple of new levels thrown in there too.

As you finish jobs and earn money you can unlock outfits and items that will give you small benefits, like helping you fly a little faster or drift a little less when coming to a stop. Nothing dramatic, but enough to offer an incentive to progress while keeping the basis of the game’s challenge intact. The game also offers that kind of endless quest for perfection that so many puzzle fans want.

Part Time UFO plays so well on the Switch that bringing it to Nintendo’s console/handheld hybrid feels like the most natural move in the world. Additional content adds replayability for fans, and the cute graphics, endearing music, and fun mechanics all fit in perfectly with the charm offensive that Switch games will often attack our free time with.

If you have never played Part Time UFO, at a mere $8.99 it’s a steal, offering the kind of 5 minute slice of gaming that many people are looking for in these busy times. If you have played it before, there are still plenty of reasons to pick it up and help Jobski with his busy working day.