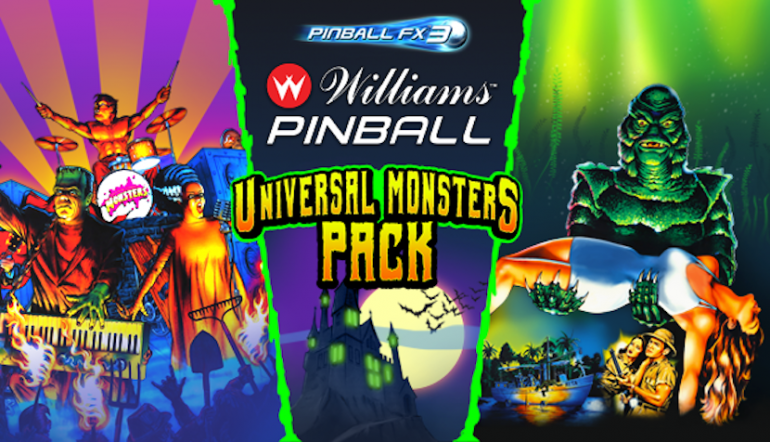 The pinball business has picked up quite a bit for Zen Studios. Earlier this year, the company acquired the rights to classic Bally and Williams pinball tables for Pinball FX3. Since that time, it’s been releasing packs left and right, featuring favorites like Medieval Madness, The Getaway: High Speed 2, and more.

Now it’s getting monstrous with the new Universal Monsters pack, set to release on October 29. This two-pack features the favorites Creature From the Black Lagoon 3D and Monster Bash, with characters from the classic Universal films. The trailer below should give you a good idea of how these tables look.

So what goes into bringing such pinball favorites to the digital front? We recently sat down with Zen Studios table designer Peter “Deep” Grafi to find out.

First off, Grafi praised the fans for their feedback with the Bally and Williams tables included in Pinball FX3 thus far.

“It was great!” he said. “Thankfully. Getting dozens of requests each week for new tables and asking for a new pack release date over and over again warms our hearts. Seeing the wishlist threads on our Reddit or forums, where people try to guess new content is also quite engaging and fun. We were really glad to see the positive response as we took extra care to treat these fantastic, classic machines with care. We meticulously built up our simulation, and created our graphic enhancements with the most respect to the source material as we could manage.”

And he notes that the team is paying attention to the requests, even if they haven’t all been answered yet.

“There are, of course, the very popular licensed tables people would like to see like T2, Addams Family, Twilight Zone, and the Holy Grail of digital pinball itself (you know what I’m talking about). But we’ve seen a strong supporter group of older alphanumeric tables too!”

But then it came down to deciding the right “monster” tables for Halloween.

“Both (Monster Bash and Creature From the Black Lagoon) tables are insanely popular among pinball fans and have spooky themes, so they are perfect for a Halloween pack,” Grafi continued. “Monster Bash is one of the late 90’s Williams tables while the CFTBL is one of the early 90’s Bally tables, so they are perfectly complementing each other. Not to mention, ZEN Studios did some great Universal hits in the last couple of years (Back to the Future, Jaws, E.T., Jurassic Park) so the licensing went smoother compared to another IPs.”

Themes, Features and What’s Next

Grafi then went into detail about how Universal lent a hand with getting the tables just right. “The experts at Universal really know their brands and characters, and this loving care shows in the drive they have to make each game with their IPs the best. We have a really great, close working relationship with them – they are an awesome group of people,” he said.

As for features fans can expect, Grafi went into specifics.

“Both tables have enhanced features just like all other Williams/Bally tables. Originally on Monster Bash, you can see 3D figurines of all the monsters except one, the Wolfman. We added him as well, so in enhanced view, the band is now complete in 3D. Furthermore, we animated all the eight 3D figurines on the playfield, so Monster Bash has never been this alive! The Creature from the Black Lagoon pinball originally has a unique hologram under the hood that we enhanced to be really 3D. The Creature will crawl out from the lagoon for real this time in enhanced view causing the players some goosebumps during gameplay.”

As for what’s next, Grafi explained that the team “cannot speculate,” which means no word on the potential of Elvira tables. But some big things are coming.

“You know us; we like to make sure we can deliver on promises/announcements with no delays. We have more stuff planned; I personally had a lot of fun having a go on some of the machines that arrived in the office for the recreation process.”