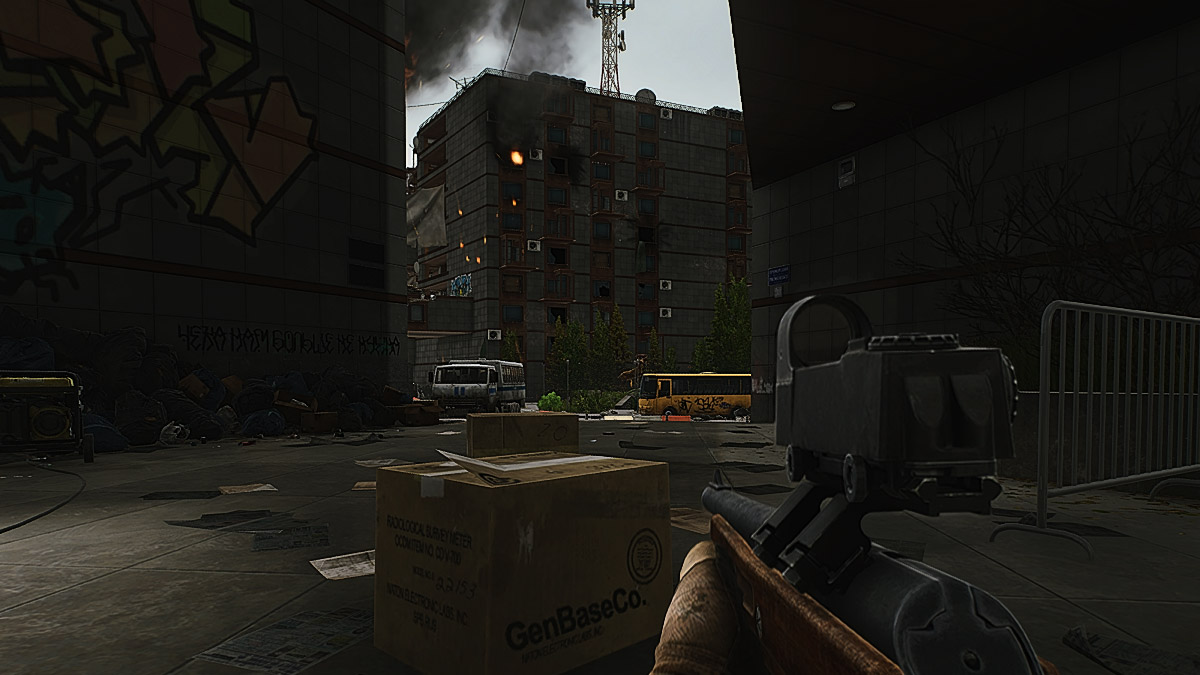 The Streets of Tarkov map comes with Escape from Tarkov patch 0.13. This map features a far larger player size for the lobby, with up to 40 players taking part in the fray featuring downtown Tarkov. With multiple vantage points offering oversight into most streets and open areas, this place offers a brilliant mix of CQB and long-ranged engagements. Here are all exfil locations for Streets of Tarkov.

Related: How to Check Escape from Tarkov Server Status, Matching Time, and Ping

All PMC exfils for Streets of Tarkov

All Scav exfils for Streets of Tarkov

Exfil details for Streets of Tarkov

Collapsed Crane is always available, and found on the western side of the map. This exfil is located near the Scav exfil Sewer, so be cautious about possible Scav squads that may be around the region looking to camp the PMC exfil or make it out themselves.

Courtyard is available southeast of Streets, just south of the Theatre. The Courtyard is a timed exfil, similar to Customs Old Gas Station — if it’s active, you’ll see a green flare in the courtyard near the entrance to stairs. The next closest exfil is Primorsky Taxi V-EX down the street to the west, which takes 5,000 Roubles, similar to the Customs map vehicle exfil.

Damaged House is located on the east side of Streets, down an alley. The damaged house is immediately recognizable, appearing as an apartment complex with a corner of its walls blown away. Run into the first floor of this house, up a wooden ramp, to exfil.

Southwest on the Streets map, near the Teppakot building, just past an APC. Run up to the checkpoint, but be wary of the generally open fields of fire offered against those trying to extract. A smoke could help immensely if attempting an early raid exfil here, although there are a few barriers that can help block incoming fields of fire.

For this exfil, you’ll need to have a green flare ready. Upon popping the green flare, an extract will be made available to you near the green bus on the road. NPC snipers will engage you if attempting to cross Klimov Street, and the road itself is wide open for a heft of long-ranged battles. Try to maintain cover within buildings until the squad is ready to exfil.

On the eastern side of the map, in the center two-lane road is a blue train that appears to have derailed. Follow it westward until it brings you to a hole in the ground — the sewer river exfil is in here. Be warned, however, that with its overhead cover, this is a popular spot for extract campers.

Underpass has two entrances, but only one exfil. With tight corners and angles, be wary of campers that can be sitting in the dark awaiting easy prey. Wherever you may come from, there’s a 90-degree turn (left or right) that takes players down a short hallway. A small barrier of trash, along with a shopping cart, marks this exfil location.

Located in the north of Streets of Tarkov, this exfil is relatively centered on the map, just off the large highway that cuts through the Streets orientated north and south. It’s easy to miss — a small concrete doorway is married to a metal door, just to the west side of a dilapidated building.

The entrance to the catacombs exfil is located just a short hop south from the sewer river exfil. Look north from the destroyed bus, and identify a blue building with a light just above its doorway. Walk in, and take the first openable door on the left to find this exfil.

Located just in front of the Theatre in the southeastern quadrant of Streets, the ventilation shaft is a small concrete box that is sticking out of the ground. It’s unassuming, and the high grass is superb for waiting out the exfil timer.