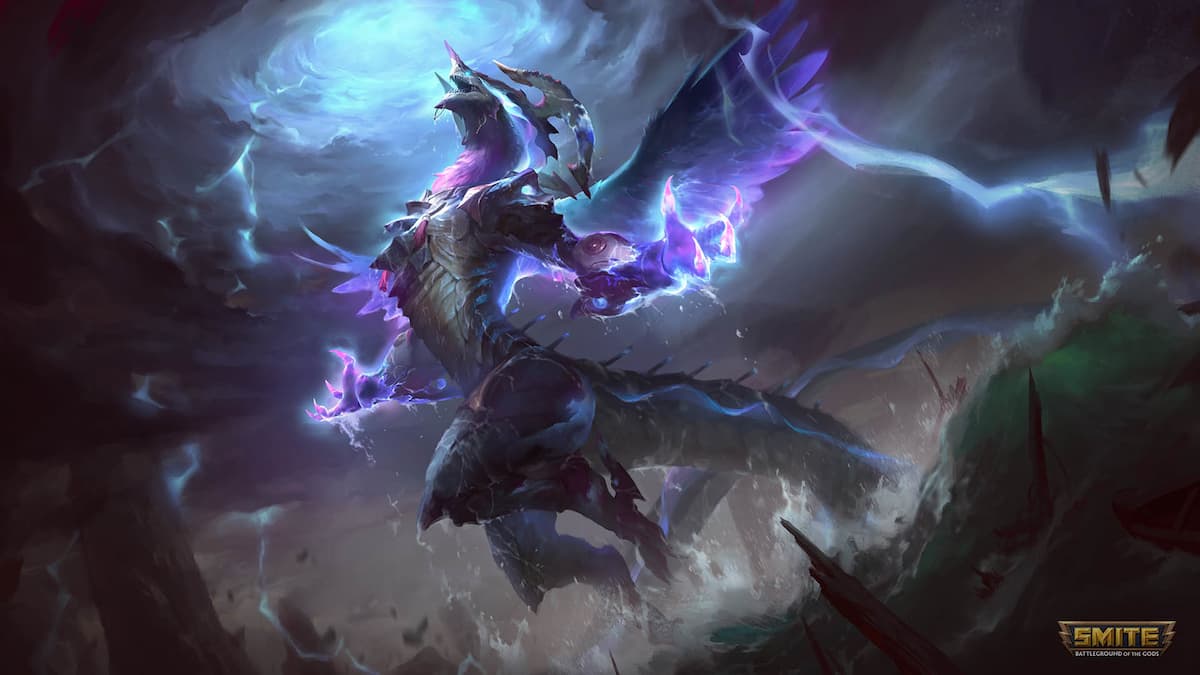 Tiamat is the goddess of creation and chaos. She’s the first god to arrive in Smite from the Babylonian pantheon, and she arrived during Season 8 to put an end to Cthulu’s assault on the other gods. She’s going to be a mage, and because of her unique ability kit, some players will be experimenting on how to best utilize her in the middle lane, in the solo lane, or the jungle. She can switch from flying in in the air to having increased protections on the ground, on all four legs.

We’re going to capitalizing on how to play Tiamat in the middle lane.

Like any mage, Tiamat will want to go with an item to ensure she can’t be caught out by an enemy god. You normally want to stick with grabbing purification beads, making you immune to any crowd control effects. This will be the gold standard for Tiamat in the mid lane, given it has a high degree of traffic from all members of both teams. You can always choose to be more aggressive with blink rune, or horrific emblem.

For the second item, the other gold standard relic to use on Tiamat will be aegis amulet. You can pop this item to become invulnerable for a short time. You’ll still be able to move with it, but no enemy can damage you. If you find yourself being caught by any enemy god’s ultimate, such as Poseidon, Ra, Scylla, Janus, or Kukulkan, aegis alumet can buy you a few seconds.

For your starter item, you have the luxury to pick from a variety of choices. The primary two you want to consider going with will be conduit gem or vampiric shroud. If you’re looking to focus on early lifesteal, vampiric shroud will be your go-to choice. You can couple this with your choice of boots, build another lifesteal item as your first item, or go book of thoth, increasing your overall mana. Tiamat uses her abilities fairly often, so she’s always hungry for more mana.

If you go with conduit gem, you only receive the passive to increase the damage your abilities will do against your opponent. You’ll want to go with a lifesteal item or something to boost your mana. Although, of the two, we’d recommend going with some lifesteal to ensure you have plenty of health on Tiamat. The choice is up to you, but these two options will be your primary choices.

As we said previously, Tiamat is constantly mana hungry. She needs to use her abilities fairly often, and because she has so many for you to use when she’s swapping between her stances, you have several to pick from at any given time. We’d recommend going with shoes of focus. These will be better than shoes of the magi by how the amount of mana you receive from them, and the cooldown reduction. Arguably, if you did go conduit gem, you could rationalize going shoes of the magi because of the small lifesteal they offer, but you’re going to need mana pretty early, so shoes of focus provide a solid start.

When it comes to utilizing Tiamat, she’s a mage who can be bruiser. She’ll swap between ranged and melee range, and while in melee range, her passive increases her damage mitigation. This gives you a wide range of choices for how you want to build her, and it also means there’s going to be a lot of experimentation of how to properly play her in any given role. She might succeed as a solo some games, but other times, you’ll want her stack the magical penetration and magical power, making your abilities even stronger.

Here is an ideal Tiamat item build that we believe will be used by most players.

That will be a fairly basic build for most Tiamat players, and you can’t go wrong with it. But you have to remain flexible. If you find that you need more magical lifesteal, consider swapping them out for any of these items to increase how much health you receive when damaging an enemy.

If you’re doing fine on lifesteal, great. We do recommend at least one lifesteal item on your mage to ensure they survive most engagements. If you need more magical penetration and power, here are some great options.

Now, because Tiamat can be crafted into a bruiser build, you also want to consider some defensive items. She’ll take a lot more hits in her melee form, and you want to make sure you survive them, especially if you’re being aggressive. Here are many of our recommendations.