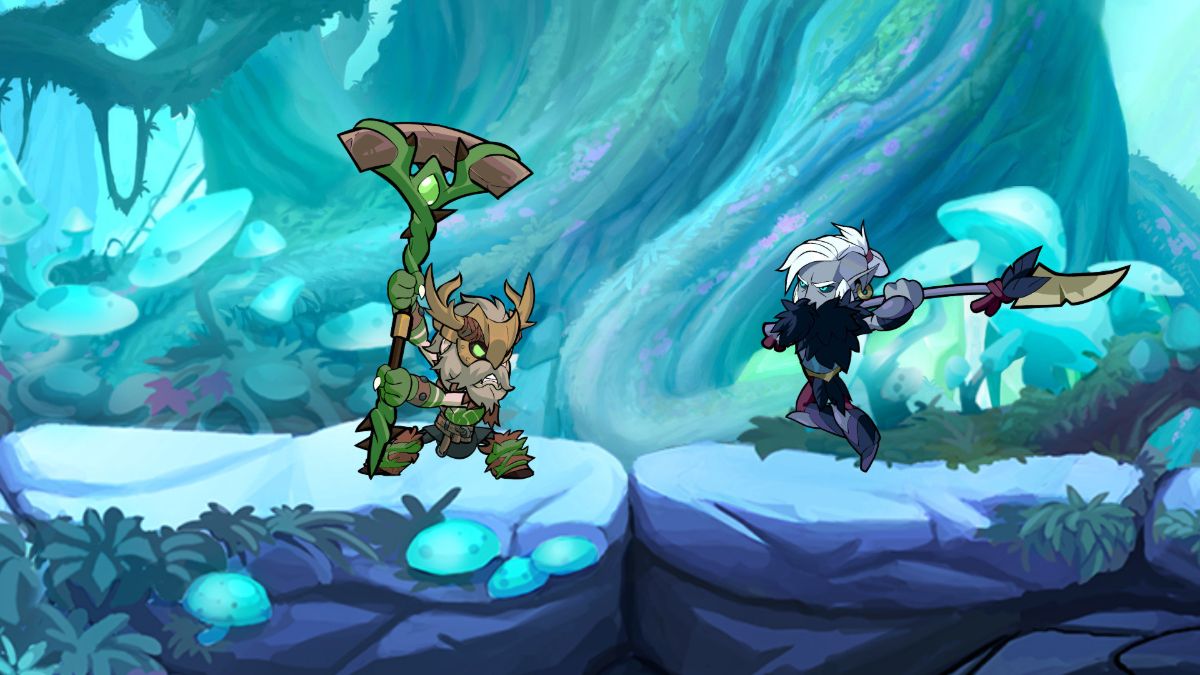 With the incredible success of Super Smash Bros. Ultimate, others have carved their niche into the platform fighting genre. Some focus on the more competitive side of the community, while others provide a fun take on the Super Smash Bros. formula. These are the games you should be checking out on PC if you’re a fan of this specific fighting game genre.

Likely the most successful project on this list, Brawlhalla offers a free-to-play option that scales down the platform fighting genre to its core. Rather than special moves, you have two different weapons at your disposal with every character. Each has its own unique abilities with the weapon that makes them unique. The animations are cartoony and further establish each character’s personality perfectly. It’s easy to play and accessible on every platform, including mobile. And if you’re playing on PC, you can rest assured you can match up on Switch, PS4, Xbox, and other systems with its cross-play functionality.

Despite a small roster, Brawlout has made an impact on the Smashing formula of gaming. In addition to its six original characters, there are four indie favorites from Guacamelee, Yooka-Laylee, Dead Cells, and Hyper Light Drifter, if you don’t count the alternate versions of the base roster. According to Steam reviews, the online community is reportedly dead; however, it still holds a Mostly Positive rating on Valve’s platform as it provides a different take on the platform fighter. There are new mechanics like the rage meter that can break combos or improve the knockback effect of your attacks.

What happens if you mix Super Smash Bros with baseball? You get Lethal League, a completely new variation on the genre. There ain’t nothin’ like a beat down as with each strike of the ball; the action gets faster on every rebound. If you get hit, you’re out. There are some breakneck moments that feel hype as two battlers smack the ball with their bat (or tail) to the very end. The art pops on-screen with a mix of stunning 2D and 3D animation, and the music by Hideki Naganuma will bring you back to the days you played Jet Set Radio and Sonic Rush with “one of the funky fresh beats.”

Rated Overwhelmingly Positive by almost 17,000 Steam users, Rivals of Aether is the creme de le creme of the platform fighter genre next to Super Smash Bros. Ultimate. It has gained a large community of fans with a fun range of characters to play. It also includes some third-party representation similar to Brawlout with the inclusion of Ori (from Ori and the Blind Forest) and Shovel Knight. The game has some beautiful 2D animation, and the gameplay experience is sublime. There are many modes to entertain you, like a story mode, a swarm-based mode called Abyss, and a sports-themed tetherball mode that has you swing a ball on a pole as much as you can against your opponent. There are also deep Steam Workshop implementations that let you add community-based content like a playable Ronald McDonald.

Last on the list is Rushdown Revolt, currently in development at the time of writing. It often is available to play for free as it continues to be in an Alpha state. This game is inspired by the deep gameplay found in Super Smash Bros. Melee, but with a twist. In this indie title, you must use the spark system to keep your combos alive and dash throughout the stage. It offers a more complex version of what Smash started as it leans further into the competitive scene than its initial casual setting. What makes the online even more competition-friendly is that it will have rollback netcode, a superior version of what Smash currently offers: peer-to-peer. Rushdown Revolt has a lot of potential and will likely present a great alternative to Super Smash Bros on PC.