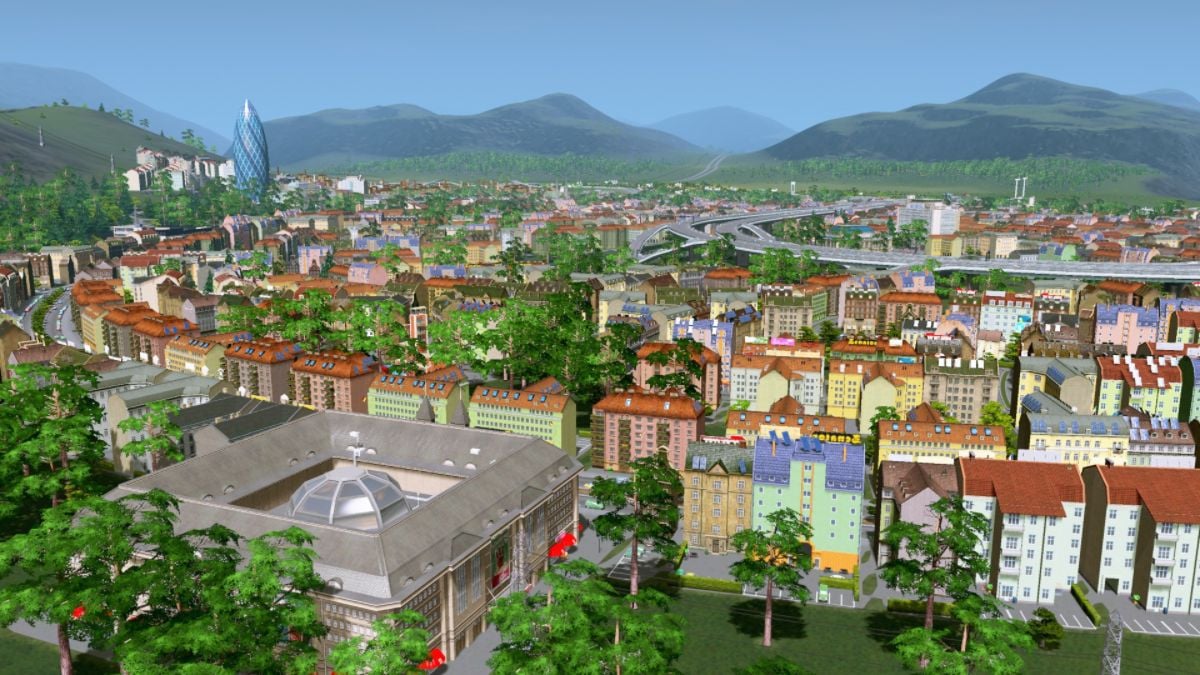 From humble beginnings, Cities: Skylines has surpassed the once mighty SimCity to become the premier city-building game around. Even 6 years after its initial release, the game is still popular thanks to a great selection of DLC, excellent creation tools, and a vibrant modding community.

Determining which maps are the best really depends on what you mean by “best”. Easiest? Most challenging? Most balanced? Most beautiful? Most unique? This list includes a little bit of everything, with an even mix of maps from the base game and DLC (for PS4 and PC players), and from the huge selection of maps available on Steam Workshop (for PC players only).

This flat, simple map is a good choice for beginners. It has a narrow, straight river that passes through the start square, is easy to build around, and doesn’t take up a lot of space. There’s also a good balance of resources here, although you’ll want to expand south along the river to reach the oil deposits, and to set up your harbors.

The most unique feature of the map is that it has four separate rail connections. This is because the same map is used in the “Trains!” scenario, in which your mission is to build rail networks for both passengers and cargo.

The creator of this map, MrMyagi, actually shelved this map after making it because he didn’t think anyone would want to build a city on it. But eventually, he did publish it on Steam Workshop, and it’s become one of the most popular Cities: Skylines maps ever.

The complex, weaving pattern of the river – inspired by The Lord Of The Rings filming locations – means it’s not an ideal map for beginners, who may struggle to expand. But fans of the map find it ideal for creating a “county”, with small, picturesque settlements dotted around its rivers, forests and mountains.

Of all of the maps on which to build a coastal paradise, Azure Gulf is the best. It has a shapely coastline and lots of rivers, beaches and islands to work with. Thanks to the abundance of water, it can be quite challenging to build a transport infrastructure here that doesn’t bottleneck on bridges.

As you’d expect, the most abundant resource by far is water. There’s plenty of forest too, but it’s not so generous with the other resource types. There are pockets of each spread out across the map, but you’re going to have to think carefully how to separate your specialist industries from your residential districts.

Owl is so well-regarded among the Cities: Skylines community that he puts his name in the titles of his maps as a “selling point”. This is the most popular of his maps, and it is an absolute beauty.

Not so much a hillside as a coastal plain framed by mountains, The Colossal Hillside is packed with gorgeous details. Not the easiest map for beginners, but playable enough. The only possible downside of it is that it’s now pretty old and so doesn’t take advantage of some of the newer features and mods that improve and streamline the game.

This popular map is designed to tempt you with an abundance of natural resources, while simultaneously challenging you not to ruin them. Your first challenge is to avoid ruining the lake itself.

The lake is the only body of water that overlaps with the start square, so you’ll have to either temporarily dump sewage in it (while supplying water with water towers), or else send the sewage somewhere else (which is generally not advised). Either way, your first priority should be to expand your city to the west, so that you can drain sewage into the river.

This map is the result of a lot of hard work by two community creators. The original Delta Range was designed by Svampan (now called [OC] Miley’), and was a big favorite of fellow creator, blackwiddow, who felt there were numerous improvements that could be made.

The community very much agreed with blackwiddow’s enhancements and the Enhanced version has now far surpassed the popularity of the original map. The key to its popularity is that it has interesting, bumpy, beautiful terrain, but it isn’t awkward to build and expand on thanks to a carefully thought out tile grid, which ensures that every tile has a bit of everything.

This map has a pre-built square of highway around the start square, which will prove really useful later in the game, and save you the effort and expense of building a highway loop when your on and off ramps start to get badly congested.

It also has three rivers within the square of highway, meaning water supply and sewage won’t be a problem. Despite the rivers, there’s a lot of flat land to expand across, with every resource except oil available within the highway square. A great map for beginners.

Another instance where prolific map enhancer, blackwiddow, took a popular map (in this case one by EyeSketch a.k.a. 섭지디) and added a huge amount of detail and refinement, resulting in a better, even more popular map.

While it’s perfectly playable, 7th Island Enhanced’s strongest selling point is its dramatic scenery. It’s a collection of pretty islands overlooked by a huge plateau, allowing you to create gorgeous multi-level cities. The centerpiece of the whole map is a huge, spectacular waterfall. It really is a great map to just look at, never mind play.

Despite this map’s high buildable area and flat, easy-to-work-with terrain, it’s not that easy a map to play on. But it is an interesting one. Its unique feature is that the start square is cut in half by the river, with a highway connection on either side. This presents you with an immediate conundrum: how to start.

As with everything in Cities: Skylines, it’s up to you. But here’s what not to do. Whenever you decide to bridge the river, don’t do it with regular roads. If you do, the highway traffic will use your city as a through-route and you’ll get terrible traffic jams. Instead, only bridge the river with highways, preferably as many as possible.

The most popular user-created map of all is, like many favorite maps, inspired by the geography of New Zealand (or Middle-Earth to use its more popular name). In Riverdale’s case, the inspiration comes from the pretty Auckland suburb of Devonport.

Riverdale is a beautifully intricate natural harbor with convenient transport connections and an abundance of natural resources. Its creator, Mechalic, has been careful to keep the surrounding hills smooth and gentle, so as to make as much of the map buildable as possible. It’s just a great, all-round map.