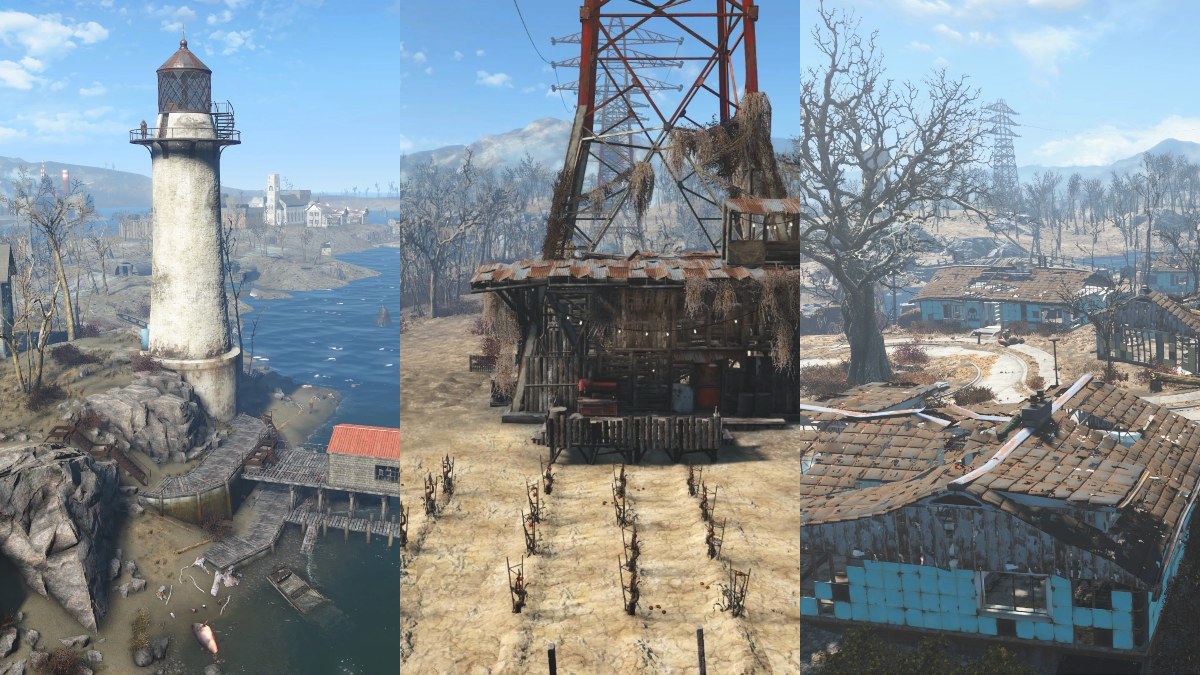 Settlements are a unique feature that was added to the series by Bethesda, starting with Fallout 4. They are one of the most enjoyable parts of Fallout 4 and help you get fully immersed in the post-apocalyptic Wasteland. If you ever wanted to build a home for Wasteland survivors and your devoted followers, the settlement-building feature is surely something to use. They all are different in various ways and possess certain gameplay advantages as well. With that in mind, we note down ten of the best settlements in the game and how to unlock them.

The Abernathy Farm can be unlocked by completing the mission ‘Returning the Favor’, which tasks the players with convincing the Abernathys to join the Minutemen, or by simply driving them away.

It has the highest build limit in the game and has a very large area for agriculture. You can expand the farm to give yourself a large supply of crops and keep your supply chains flushed with food. Additionally, this settlement is located in an area where it is not that dangerous. As such, it is very rare for this settlement to get raided.

This is a great location for scrapping wood and iron as you’ll have a lot of wooden logs and iron items left over. Additionally, there is a small river nearby which can be used for setting up water purifiers. The area is quite big so you can customize it as you wish.

Graygarden is a unique settlement as it is run by only Mister Handys. It can be unlocked as a settlement after completing the mission ‘Troubled Waters’.

This offers a lot of customization options and can be completely self-sustaining with minimal effort. The settlement comes with a built-in garden and greenhouse with the Mister Handys to maintain it all for you. You can create a steady supply of food and ingredients without ever needing to tend to the robots. Attach it to a supply chain, and you can keep other settlements fed with little effort.

The Kingsport Lighthouse is a nice settlement you can acquire if you’re all for the sea life and enjoying the scenic view. You’ll need to clear the Children of Atom cultists and a Glowing One on top of the lighthouse to unlock this settlement.

While the build area of Kingsport Lighthouse is small it is nonetheless a great setup for proper defenses. The rocky areas can serve as machine gun points and proper defense posts as well. Plus there is a house and lighthouse for you and your settlers to relax after a long day’s work.

Longfellow’s Cabin is unlocked after you hire Old Longfellow as a follower when completing the quest ‘Walk in the Park’. After that, you’ll have to clear the Fog from the place.

The build area for this settlement is quite large and is covered with rocks in some places. This makes for nice machine gun points and defense posts as well. You’ll get attacked by seaside creatures but those can be easily handled if you equip your settlers strongly. Plus, the view is ecstatic and will make you long for that seafarer’s life.

Sanctuary Hill is the first settlement in the game and the Sole Survivor’s original home. It is one of the largest you can get hold of. It is close to a Red Rocket Truck Stop, that can be looted and turned into an outpost, and there are tons of materials that can be scrapped. It has a lot of room for growth and makes a nice base of operations.

The settlement is essentially your own private island, complete with a marina, a house, and a small shack for you to start with. It has at least one unit of every type of common plant including Tato, Corn, and Razorgrain. The majority of the items here are scrappable which will let you build anything you want. Plus, as it is an isolated island attacks are very rare here.

Starlight Drive-in is one of the largest settlements in the game and can be unlocked in one of the ‘Clearing the Way’ missions. It provides a large build area for you to construct whatever you want.

There are many cars, barrels, and other items lying around that can be scrapped to give you a nice pile of useful resources to get started. You can build a thriving settlement of Wasteland survivors, an imposing fortress, or just a gallery to keep your knick-knacks. The sky is the limit for this location.

Red Rocket Truck Stop is just near Sanctuary Hills and where you meet your faithful canine companion Dogmeat for the first time. It is instantly unlocked as a settlement after meeting Dogmeat.

This settlement has all the essential structure needed to start your journey across the Commonwealth. There’s a workshop, power armor station, weapons workbench, armor workbench, and chemistry station in the settlement garage. As such, these are really essential for the new players. Not to mention, the aesthetic of this is timeless and can be made more beautiful with new items.

Ever wanted to create your own Vault full of settlers with their own Vault suit and Pip-Boy? By completing the Vault-Tec DLC, you can do just that. you’ll unlock Vault 88 where you’ll be the overseer and have full control. Up to thirty settlers can live in this Vault that offers almost limitless customization opportunities and enhancements to the player. Settlers will follow daily routines and can be assigned to various duties and shops, performing workouts and more. Truly, a wonderous creation by the people at Vault-Tec.