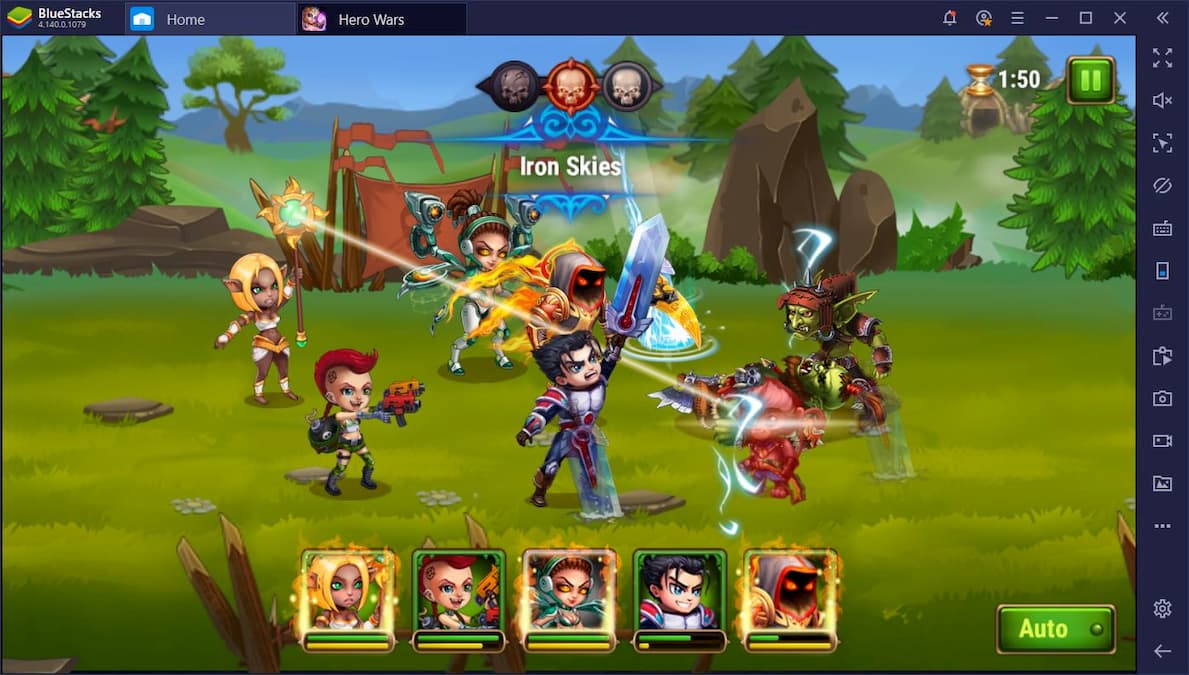 With plenty of characters of different abilities at your disposal, creating the best possible team in Hero Wars can be tough. Assembling your team is an essential part of succeeding, but you need to start with the basics: your team. Hero Wars gets regular updates, so what you thought was the best team may not be anymore. This guide explains what the best team in Hero Wars could be for you, so you don’t get left behind.

What are the best teams in Hero Wars?

In this section, we highlight the best teams you can currently create in Hero Wars, and which heroes they’re comprised of. Unlike games like Raid: Shadow Legends, certain combinations of heroes can be better than the individual strengths of the best of the game, which is why these teams are built based on synergies. Read on below to learn about hero roles and how they play into a team.

This team is made up of the best of the best. K’arkh has the ability to throw enemies in the air and attack them with tendrils, whilst stealing a little life to keep them alive. Astaroth is a powerhouse of a tank class and will take anything that’s thrown his way. Jorgen is an interesting hero because he can protect his team in the Support role but also takes a fair few hits to knock down. Faceless is another fantastic Support hero and Martha is a top-tier Healer with skills that also provide support to allies.

Both Krista and Lars have the ability to mark enemies, allowing everyone to deal more damage to the marked enemies. As mentioned above, Astaroth is a great Tank, and essential to any team build in Hero Wars. Martha is a phenomenal Healer, capable of keeping her teammates alive. Lastly, Jorgen has the ability to drain energy from the enemy team which can be extremely helpful while the entire team is simultaneously dealing damage.

This team is primarily made up of magical heroes, such as Satori who is a decent DPS but relies more on magical powers than physical attacks. Thea is a good enough Healer, but with Astaroth and Jorgen on the team, there’s not much need. These two blast enemies with damage and keep them occupied long enough for the buffs and debuffs you need to kick in and make life even easier.

Dark Star uses her shadow which duplicates herself and adds another attacker. Ziri has a burrow ability which allows Elmir to get hit and jump back, creating four clones. Daredevil is also an attacker, which means there can be up to nine attackers at a time. This team is for high damage output with a lot of teammates coming from abilities.

This team isn’t made up of the cream of the crop in Hero Wars, but it’s still a viable option. Astaroth is the head honcho and the tank you want upfront. Elmir doles out hard physical hits against anything in their way, while Jet blows up buffs and debuffs wherever they’re needed. Daredevil provides even more physical damage, aided by those buffs from Jet, and Dark Star adds more on top to create a team that doesn’t have longevity in a fight, but it does have power.

All of these heroes have high damage output and critical damage. This is another team full of straight damage. The output of DPS you will have when using this team combination is tremendous but relies heavily on eliminating enemies as quickly as possible because their survivability isn’t the highest.

Cleaver is an underrated Tank who can carry your team through almost any fight. Jet has all your Support needs and that only makes everyone else better. Sebastian is an incredible Support hero who works alongside Jet to make the debuffs and buffs flow like quick punches. Keria deals precise damage, wounding enemies where it matters and making them even weaker moving forward. Finally, Nebula brings even more support to the team, making any hits that land on your team weaker, and the ones you land far stronger.

Nebula brings buffs for the entire party, making everyone else in the team instantly better. Dorian does something similar with the skills at their disposal. As mentioned in an early team combination, Astaroth has the incredible tanking ability and will protect the other heroes very well while all these abilities are activating. Astaroth also has a revive ability in case anything goes south. Helios is a great hero that can summon support spheres to protect the team, an area of effect solar wind flaming sphere, and consistent damage to the opposition.

Morrigan is a great Support hero to start any team off with, particularly for this one which is made up of weaker heroes that you may find yourself using in the early game. Corvus is a strong Tank and will only be stronger with Morrigan backing him. Keira is a brilliant DPS hero who will cut through anything in front of her, and Faceless can buff her skills with more support buffs and debuffs. Dorian is the Healer, and he’s a decent one at that. You shouldn’t struggle too much with this team, particularly in the early game, but you’ll need to upgrade as you get closer to endgame territory.

Combining these classes strategically creates the best possible build. Too many of one and the team will fail, not enough of another and the team will also fail. Like many good things in life, players must bring balance to their team. Heroes also have compatible artifact buffs and can work better together, this is called synergy. In a team of 5 heroes, you’ll want 1 Tank, 1 Healer, 1 DPS, and can fill the final two positions with more DPS, Healers, or Support heroes, depending on synergies.

A tank is exactly what it sounds like. These heroes will stand in front of their teammates, absorbing as much damage as possible and protecting the heroes behind them. Their talents generally lie in provoking enemies and absorbing damage, buffing their defenses, or just taking hits like a trooper.

DPS stands for damage per second. Though a hero may do a lot more damage than another, DPS takes into account how quickly the damage is thrown out. This means the best damage dealers not only have high damage output but also do it quickly. These are the heroes you’ll be protecting with your Tank class since DPS heroes tend to have lower defenses and health overall.

The primary objective of a Healer is to keep their hero teammates alive. They’ll be highly effective at protecting the DPS heroes as well as allowing tanks to absorb as much damage as possible. This is where the buffs need to come from but also careful healing decisions. If your Tank falls, it’s not as much of a loss as it would be if your DPS did, so tactics are key with the Healer.

Support heroes provide support to their teammates by buffing them or debuffing the enemies. They are indirectly involved in the fight because they don’t usually attack, but are essential to the success of the team. Without buffs on heroes, your attack and defense will be weaker. Likewise, you stand a better chance of felling huge enemies with your Support hero rebuffing them as much as possible.