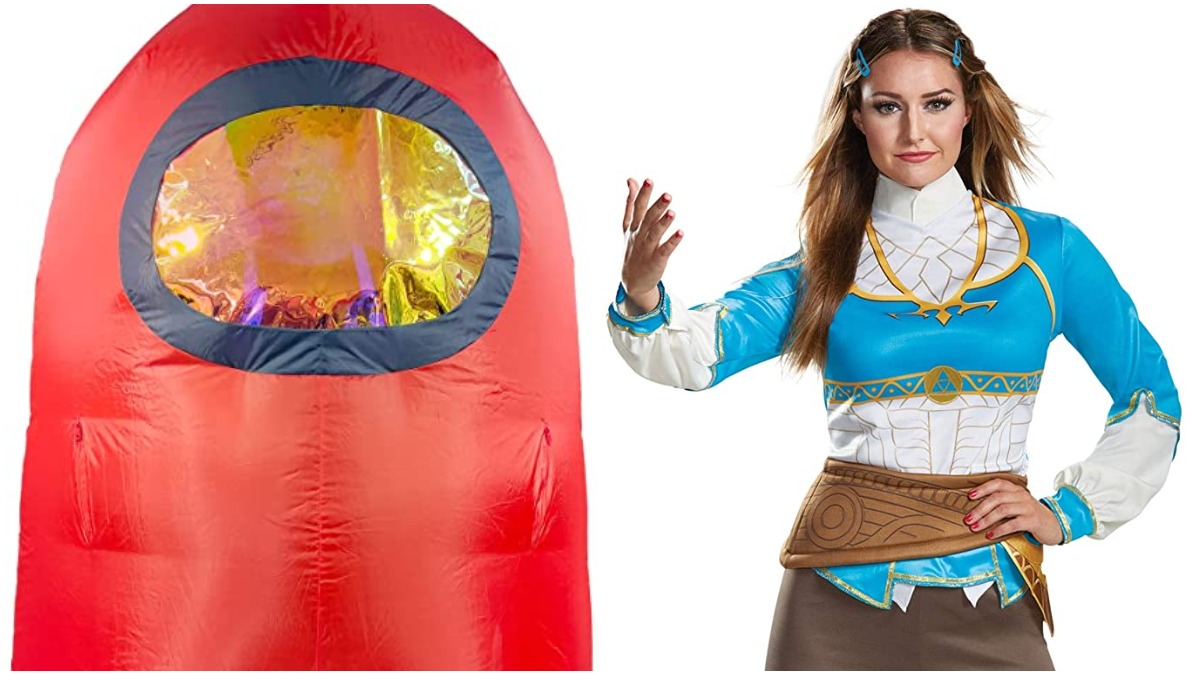 When you’re a gamer looking for a costume to wear for Halloween, your options may end up being limited. This is especially true if you’re not an expert cosplayer. While gamers can use their hands to handle controllers, not all gamers have the same skills when trying to sew. For many gamers, a store-bought costume is the best they could do. These types of costumes are not as detailed, but they are perfect for a casual Halloween party or function.

The best video game costumes can be bought on Amazon. These costumes can be either off-brands or officially licensed merchandise. You can pick one from your favorite franchise, or just pick one that you just think is the coolest. It’s ultimately your decision, and below are your best bets.

This very small indie game had friends turn on each other as they play as little beany spacemen who need to find out who is the imposter among themselves. People around the globe now recognize the crewmates and sus have become video game slang. With how big Among Us has become, it was only inevitable for the costumes based on the crewmates to be released. Though there were unofficial ones released beforehand, developers Innersloth have finally announced official costumes for fans to buy. Now everyone can be sus for Halloween.

Bowser is one of the most recognizable video game villains out there. Even though there’s a jumpsuit of Bowser available on Amazon, the simple headgear and backpack version is an easier costume to wear. It’s less of a hassle to get out of. The headgear matches Bowser’s face and demeanor well enough. The Koopa shell backpack is also a basic yet effective way to show off Bowser’s iconic spikey shell. Though it may come off as a costume on a budget, the high-quality headgear is what makes the costume come together.

Jason’s Mask from Friday the 13th The Game

There was a time when Jason Voorhees from the Friday the 13th movie franchise was becoming a huge video game star. The Friday the 13th The Game was developed by IllFonic; it had players either play as Jason or camp counselors. As Jason, your job is to slay every counselor on the map. As a counselor, you need to try to escape through a variety of different means. The game proved to be successful at first, revitalizing the Friday the 13th brand. Fans can get their hands on some high-quality masks based on Jason’s iconic hockey mask on Amazon.

Zelda from Breath of the Wild

Though Zelda has had different outfits throughout the Legend of Zelda franchise, her appearance in Breath of the Wild has become one of her more iconic ones. It’s fortunate for fans that a high-quality version of her outfit can be bought on Amazon. The package comes with a shirt, pants, and belt. The pants are described as being not as good of a fit as the shirt, with reviews recommending buyers to get their own brown pants. With that said, the top is perfect and can be worn multiple times. This Breath of the Wild Zelda costume also works great alongside a Link costume.

Multiple different Mario outfits can be found on Amazon. There’s one that comes with an inflatable Yoshi that wearers can pretend to ride on. However, the Yoshi part of that outfit is hard to keep inflated and even harder not to rip. The officially licensed Mario costume is the best version that can be found on Amazon. It’s made up of strong fabric and will last for years. It even comes with a padded belly to match more closely to Mario’s stomach.

The white cloaks from the Assassin’s Creed video game series are some of the most fashionable pieces of clothing in all of gaming. Someone could wear the white cloak in public when it isn’t Halloween and still look like the coolest person on the block. The officially licensed Assassin’s Creed costume is based specifically on Eizo from Assassin’s Creed II. The package comes with almost everything – the hood, belt sash, chest belt, cape, and gloves. Unfortunately, it doesn’t come with pants, or those small blades that the assassins hide within their wrists.

The jumpsuit version of the Zero Suit Samus costume may seem too skintight for some. Fortunately, the fabric used to make the outfit is very stretchable. As long as buyers get the right size, the costume could fit any person in any body type. The suit has a very visible zipper on the back, which may turn off some purists. It’s also pricey for a one-piece suit. Nonetheless, the suit can last for more than one Halloween. It’s also an easy cosplay option for people in conventions or other similar types of gatherings.

As is, the Vault Boy from the Fallout franchise isn’t the most difficult costume to make at home. Yet for the gamers that can’t come up with the time to make their own, there’s a solid Vault Boy costume on Amazon. It even comes with a mask that is meant to look like Vault’s Boys round head. The mask adds in a level of silliness that oddly matches Vault Boy’s overall vibe within Fallout. Vault Boy is meant to be a cute and innocent mascot, so a jumpsuit with the mask matches the character perfectly. Buyers can also purchase a pip-boy device separately to match more closely to vault hunters within the game’s universe.

This specific costume set found on Amazon comes with only the jacket, gloves, and hat from the show. Buyers would need to get their own black t-shirt and jeans, though fortunately, those are very easy to get. The gloves can easily rip and the cap may turn out to be too small for most people. Nevertheless, the costume is very accurate to Ash’s attire in the original Pokémon series. The cap and jacket can also be worn multiple times. Most importantly, the costume isn’t expensive to get on Amazon, especially compared to other costumes.

There’s always a concern when buying an inflatable suit. These kinds of suits are often easily ripped and they are hard to move around in. At the same time, inflatable suits are often some of the standout costumes found on Halloween and conventions. That’s because there’s inherent silliness to them that brings a smile to everyone’s face.