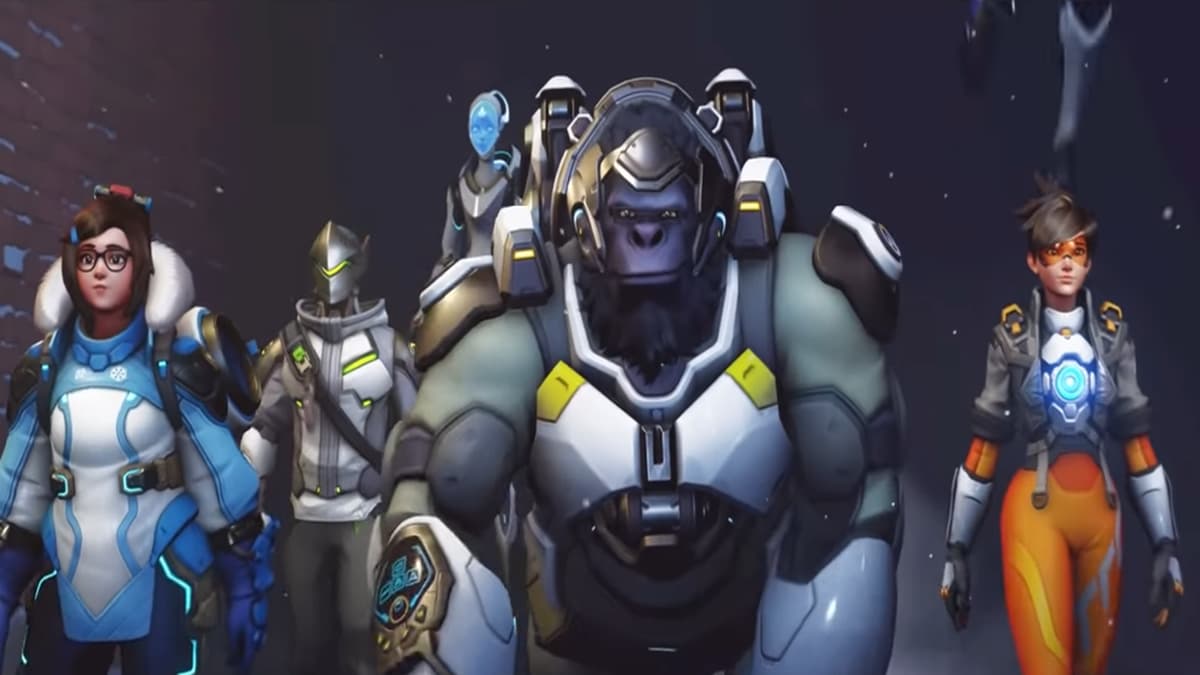 After its announcement at BlizzCon 2019, Overwatch 2 looked like a simple step for the series to take. At the time, it appeared that some PvP elements and minor PvE modes were all that was new in the sequel. Fans in 2019 saw this as a minimal update to what we already had in the first game. Fast forward to BlizzConline 2021, and director Jeff Kaplan and the rest of the Overwatch team have finally given us a significant look at what we can expect from Overwatch 2, whenever it releases.

The Overwatch team showed off a wide variety of aspects that will be different from the game you know today. From PvP changes that could potentially stick to the cinematic storytelling fans have come to love, there are a lot of changes to the world of Overwatch in the sequel. Overwatch 2 may be a little further away than we want it, but in the meantime, we can take a look at these exciting features shown off during BlizzConline 2021.

Fans are certainly looking forward to the new maps in Overwatch 2. The 2019 reveal showcased a map called Toronto and a new mode called Push. This year, we were treated to two brand new PvP locations: Rome and New York City.

The beautiful Rome map was inspired by many pictures taken by an environmental designer on the team while on vacation. Even broken down parts of the city were rebuilt to bring that Overwatch feel to the location.

New York City’s design is made to feel “uniquely Overwatch” while maintaining many aspects of the city you would expect to see, including neon lights and pizza shops.

As of this writing, we do not know what game mode will be on these maps, but there are even more modes and maps on the way when Overwatch 2 releases.

While we expected to see new maps and heroes brought to Overwatch when the new game comes out, it was surprising to hear Kaplan say that the development team’s philosophy on PvP matches is changing. Since Overwatch’s release in 2016, character interactions have mostly stayed the same, even after some gameplay changes and patches.

The development team revealed new passive abilities to not just individual characters, but also to role classes overall. For example, DPS characters are set to have a slight speed increase. In the game right now, regular travel speed is consistent between all characters before they use any abilities. Tanks also could see a reduction to their knockback range, and all supports could see automatic healing instead of only Mercy.

Overall hero changes are coming to Overwatch 2, and from the sound of things, these will be bigger than the usual patch notes the first game sees now. One example is how Reinhardt can now use Firestrike twice and control or cancel his charge whenever he wants. During the interview, Kaplan noted that the team is looking closer at tank characters specifically with how they play in the game. While not everyone may receive significant changes, there will be some differences in how characters are used in the PvP section of Overwatch 2.

Everyone loves the story and lore of Overwatch, so the sequel bringing in a Story mode is not surprising. Kaplan says that we will learn who is causing the second Omnic Uprising and see all these characters interact in a way they have not before. Every single story mission will have cinematic intros and outros, multiple characters that can be chosen from (all with their own dialogue), NPCs for the first time, and specific events that will kick off during missions.

Overwatch 2 creative director Jeff Chamberlain said along the lines multiple times during BlizzConline of pushing how dark the bright story of Overwatch can go. Blizzard is trying to find that balance without making things too bleak and giving the proper amount of conflict so that victory has meaning.

We also got some early looks at potential cutscenes in Overwatch 2’s cinematic story during this portion of the stream. We see Widowmaker and Sombra attacking Zenyatta and Genji, Reinhardt charging in on Bastion before Torbjorn stops them from fighting, and quite a few early sketches of characters in the transport ship flying and being shot down.

There is a good chance that there are quite a few locations exclusive to this story mode. These locations have been built specifically to tell the story in this area, and from the early looks we got of them, they seem to not fit a PvP design, unless they have an alternate form of each map they are working on. Specific places like Torbjorn’s Workshop in Gothenberg and India have distinctly been designed around story mode and focus primarily on what is happening there at that moment in time.

Hero Missions are a bit of a side mode that runs alongside the main story in Overwatch 2. We got our first look at them at BlizzCon 2019, but at the time, they seemed like a small inclusion. However, today’s stream made them look much more significant in scope, with hundreds of Hero Missions promised for the game when it releases.

Hero Missions are cooperative PvE experiences where players work together to meet an objective on different maps in Overwatch lore. These are more involved than the Archive missions in the first Overwatch, which felt much more like a Left 4 Dead experience where players are only trying to get to the end of the level. Here, players have objectives to complete, including collecting canisters, delivering them to a goal, and turning on power cells.

While Hero Missions are not the primary Story mode, they will bring aspects of Overwatch’s lore to the table with how characters interact with each other and the environmental clues we have come to love in the first game. Maps currently in the first game will see new expansions added onto them that will change what you know about levels that have been in Overwatch since the very beginning. As you enter these older locations we have played for years, you will find something new you were not expecting.

What started as a small prototype of a sandstorm on the Temple of Anubis map has turned into a whole new dynamic weather system coming in Overwatch 2. Dynamic weather seems to be confirmed for only Hero Missions and Story Mode, as the competitive balancing for something like this would not be easy in PvP.

When you start a mission, the entire map will likely look different by the time you leave. If you are in a wintery location, a blizzard can kick up, or the time of day can change as you progress. We saw rain in Paris and sunsets looking different in Numbani from the one in Hollywood.

It appears that you will get a good gauge on what the weather conditions are like in each Hero Mission before you start, so you can change your team comp to suit whatever is happening. An example of this is how Hanzo and Widowmaker have an ability and an ultimate that reveal enemies through sandstorms, that way all teammates can see better.

The talent system that was shown off in 2019 has been expanded upon and offers an in-depth skill tree to customize how your character performs in PvE. Each character has their own expansive skill tree, meaning you will have some fun finding each character’s new abilities.

In 2019, we saw Mei transform into a rolling ice ball and Tracer bomb multiple enemies when sticking one. This time around, we looked at Solder: 76’s healing field with upgrades to make the field follow him after deploying it and sending out a shockwave to knockback enemies in range.

We also got a look at Mercy firing some kind of projectile out of her Caduceus Staff and resurrecting multiple teammates from a range like her old ultimate used to do. We were also told about Junkrat dual-wielding grenade launchers and setting an electric trap. A quick look at Reinhardt firing an ice charge was shown as well.

We will need to see if these actually come in the final product of Overwatch 2, but it appears the developers are having fun breaking all past rules of Overwatch to change these characters up in PvE missions.

One of the most interesting changes with Overwatch 2 is how the team is updating every single Overwatch character’s looks compared to how we know them today. We saw quite a few updates in 2019, but the new Behind the Scenes stream offered more. Our first look was at McCree, who keeps his usual cowboy look but will have a slightly longer beard and a new serape. Overall, he looks similar, but updated. That is what the team is going for.

Pharah got minimal updates to her look, with mostly just the color of her armor being altered and her visor being more transparent than before.

Reaper’s armor is more apparent than it was in the first Overwatch. When you looked at him before, all you really saw was a character with a skull mask wearing a hood. You can now see his armor underneath and small hints of silver and red to go with his mainly overall black design.

Widowmaker has gotten new armor in her suit as well, but overall looks very similar to her current look in Overwatch. The most significant change to her is her hair is now braided instead of being in a long ponytail.

Kaplan said in the Blizzcon stream that the combat of the PvE in Overwatch 2 did not feel as engaging as they wanted it to be back in 2019; with that in mind, the development team set out to bring more enemies to the table. During the Archives event every year, the game added in Null Sector enemies, but none of them were really memorable.

Since that time, the Overwatch team has added tons of varying enemies that interact with players very differently from the others. Kaplan says that a large portion of 2020 was dedicated to making these baddies more engaging and varied than what we have seen in the game before.

A bit of a smaller announcement during the stream was that the Overwatch team is looking hard at how weapons sound in the sequel. As it is now, weapon sounds are fine but do not stand out while playing the game. The team is working on making that aspect of the game more dynamic and notable while you are playing. This means that the sounds your weapons make will be different if you are in a building, outside, in a wintery location, or in a tunnel.

In a small side note given by Kaplan, 2CP (Dual Control Point) maps might not exist in Overwatch 2. Fans of Overwatch have widely criticized maps like Horizon Lunar Colony, Paris, and Temple of Anubis for years. The outcry has become so prevalent that Horizon and Paris were the only two maps removed from all competitive play. While Kaplan making that statement doesn’t mean for sure that those maps will not be returning, there is a chance. If anyone does enjoy those maps, they will likely exist still in an Arcade mode or Quick Play, as they have been in Overwatch since the beginning.