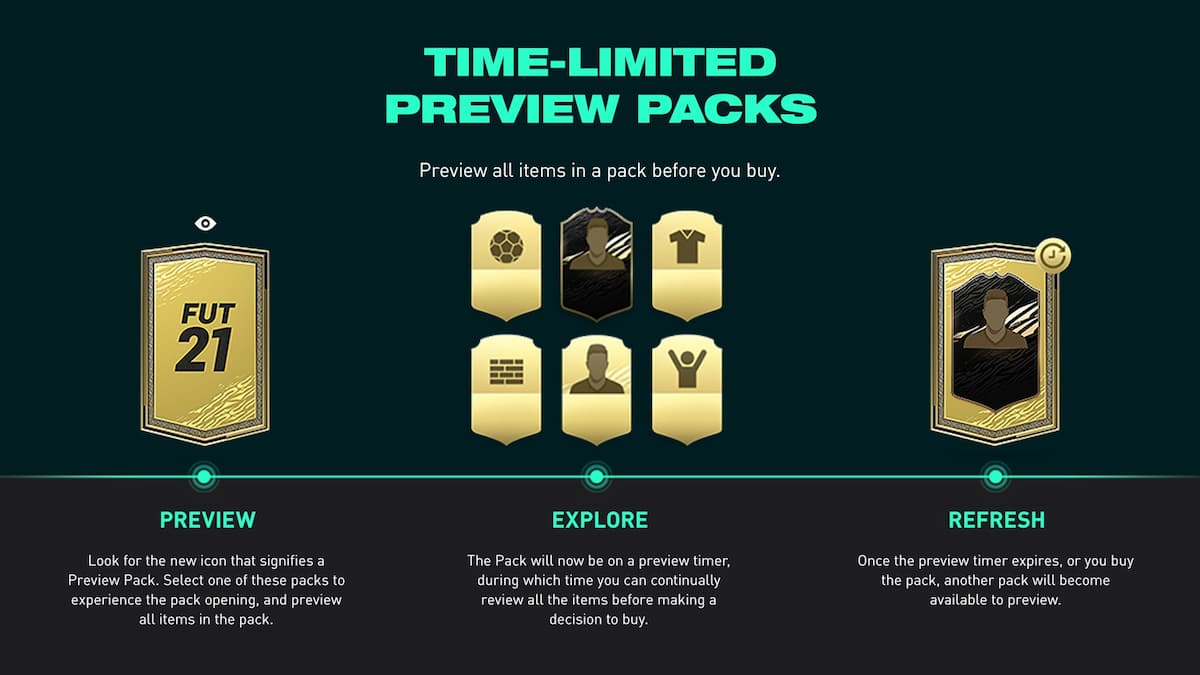 On June 18, EA Sports and FIFA 21 have implemented a new feature into the game that could have huge ramifications for FIFA 22 and beyond. Now, players can open what FIFA is calling Preview Packs, which let players see what’s in a pack before committing to buy them. The way this all works is a bit convoluted, so let’s take a look at everything that’s changed.

How do Preview Packs work

While Preview Packs are active, FIFA players will be able to go into the FUT store and see them in the Promo section. Here, you’ll notice that packs have a symbol above them that tells you which packs can be previewed. When you select a pack, you’ll watch the normal pack opening animation that you’re used to; however, you haven’t spent coins or FUT points to see what’s inside.

You’ll then be able to see everything the entire contents of the pack. From here, you can decide to spend coins or FUT points to claim the items in the pack or pass on it. If you decide not to buy the pack, you’ll be taken back to the store.

You’ll still be able to see the highest-rated card in the pack if you decide to change your mind. However, the important thing to note is that a timer will now start until you can preview a new pack. In EA’s example, the timer was set to over 20 hours, so we can probably expect this to reset daily.

Preview Packs could have far-ranging consequences for future FIFA titles. For now, they will only be available during the current Festival of FUTball promo; however, this time of the year is generally when EA starts experimenting with content ideas for the next year’s product.

It’s entirely possible that, given all the ongoing legal issues EA is facing with FIFA, Preview Packs will become a consistent offering. The packs don’t completely get gambling out of the game, but it is a step that other companies have taken to mitigate some of the concerns parents and players have with loot boxes. Either way, it seems clear that EA Sports is on the precipice of making intriguing changes for how players interact with Ultimate Team.