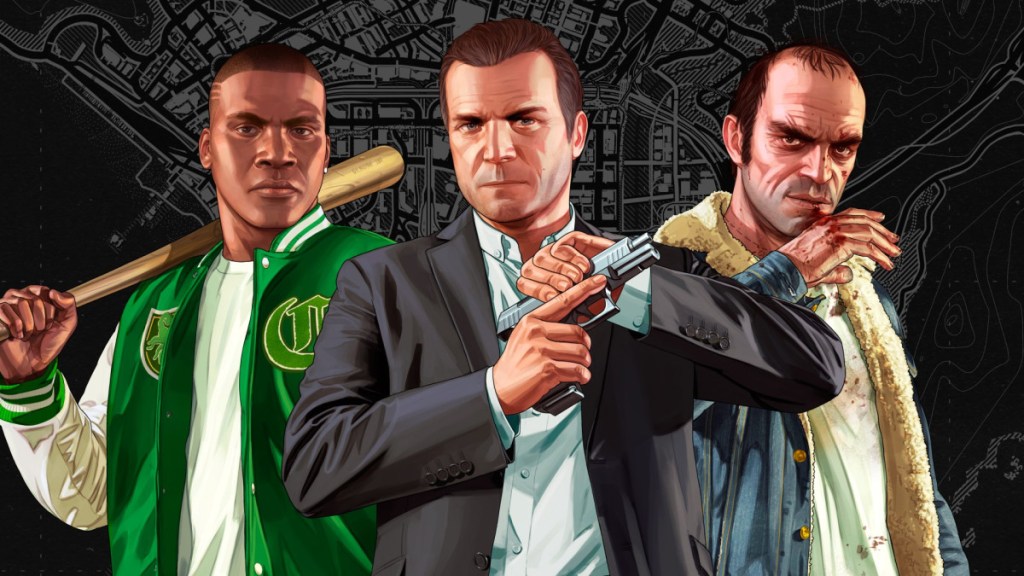 Grand Theft Auto is simultaneously one of the most popular and controversial video games out there. Its open sandbox world has allowed millions of people to be the worst citizen ever. Whatever way you fill up your wanted level, you will always have a high-action fight or escape sequence. Let’s take a look at all the Grand Theft Auto games and rank them best to worst.

Honestly, how could any other Grand Theft Auto game compete with GTA 5 at this point? Eight years following its initial release, it has become one of the most successful entertainment properties of all time, has a beloved online mode, and featured a top-notch single player mode with probably the most memorable protagonists in the series. Until Grand Theft Auto VI inevitably comes out at some point, GTA 5 will hold the top spot here. No competition.

Vice City is the second GTA game to debut on the PlayStation 2 and arguably still the most stylish game in the series. The neon colors and the characters of Vice City make its setting feel more alive than other games from this era. That is why so many people are hoping for a return to the area in GTA 6. Not to mention the soundtrack selection for the game is far and away the best in the series.

Honestly, you could make an argument for San Andreas and Vice City to swap spots on here. Either way you go, you are choosing one of the most standout releases on the PlayStation 2. Andreas took a larger satirical view on the series and incorporated multiple fun elements like the jetpack. This is also the first entry that introduced RPG elements to the game. You could work to make your CJ as skinny or fat as you wanted.

Grand Theft Auto IV came out when all games were going for a gray or dirty brown look, so its visuals have not aged the best. That being said, GTA 4 had a more serious story and a vastly improved Liberty City. Its driving mechanics have been heavily criticized, but overall, this game remains the highest overall rated Grand Theft Auto game because it gave you a great playground to play in. It also had two great expansions in The Ballad of Gay Tony and The Lost and Damned.

No one can argue the importance of Grand Theft Auto III. This was the first 3D GTA and incorporated the open world gameplay that would evolve into what you love today. Going back to play it today may be rough, especially in its story missions, but for its time, this game revolutionized open world games with its sandbox gameplay.

Originally releasing exclusively on the Nintendo DS of all places, Chinatown Wars sees you dealing with the Triad gang in Liberty City. This game was made specifically for touchscreens, making the DS a perfect home for it while bringing back the top-down perspective that had not been used in years to that point. While a Nintendo console is not where you would expect to see a GTA game, this was one of the better games on the console.

What originally started as a boring game called Race ‘N Chase ended up becoming the first Grand Theft Auto after a bug made cops act more aggressively and try to run you off the road. It adopted playing as a criminal trying to work their way up in the underworld during its transformation and laid out the blueprint for the series to get to where it is today. The original gameplay was from a top-down perspective and is a little tough to go back to today.

Overall, GTA 2 is more of the same as the original Grand Theft Auto, albeit in a near-futuristic city. It was still played from a top-down perspective, and in that respect, it’s still a good game. Essentially, this game feels like a stepping stone on the path to greatness for the series, but not much else.