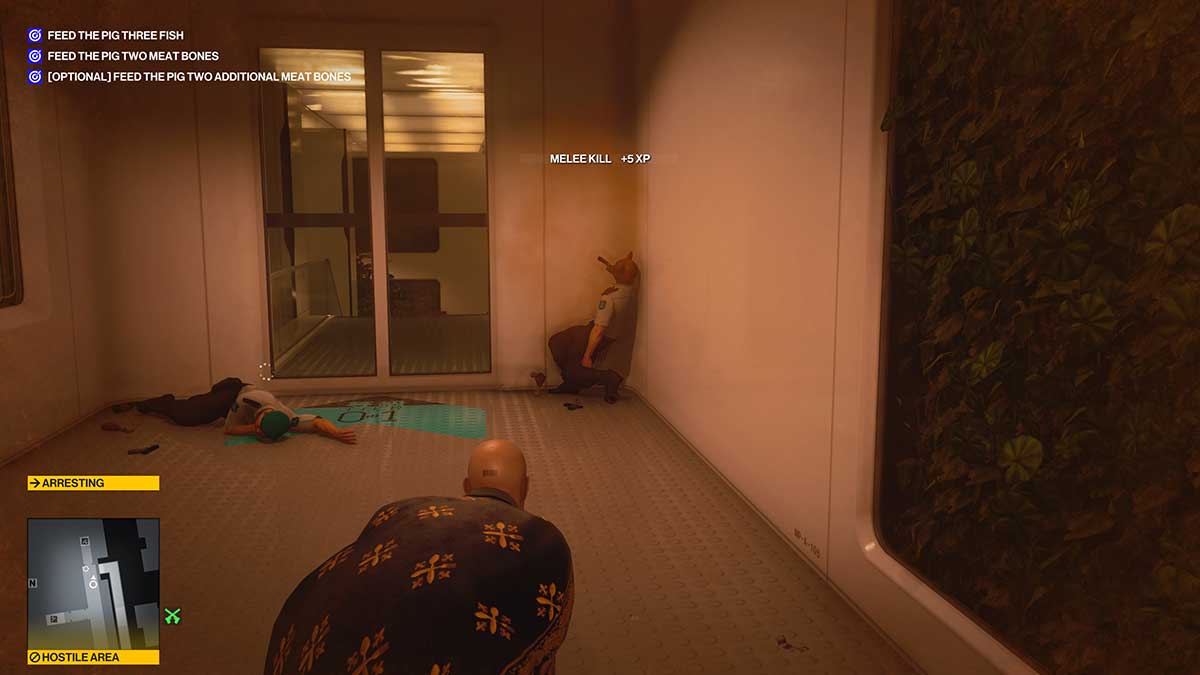 The Gluttony Gobbling is the new three-stage Escalation added to Hitman 3 with Season of Gluttony. However, this is far from your standard Escalation since it’s packed with multiple objectives and a unique twist on the core Hitman experience. This guide covers how to complete all three levels of the Escalation with a rank of Silent Assassin.

The unique take on the traditional Hitman 3 formula in this Escalation is a wish list for the Pig. Each level has a list of objectives for Agent 47 to complete, all of which are food that the Pig desires. NPCs will drop the items you need based on the weapons you use to kill them and their mask color. For example, the fish wire drops fish from white pick masks, and the grape knife drops grapevines from blue pig masks. Completing all the objectives unlocks challenges related to this Escalation, so they’re worth completing for bonus XP.

You need to pick up the Pig’s Succulent Wish List for this first level and follow it. The Pig wants two fish and two grapevines, and you’re going to have to get them from NPCs around Chongqing. There’s a restricted loadout in the level, and you’re not allowed to change out of your suit for the entire level. You first need to head to the pig statue at the top of the stairs directly in front of Agent 47. Once you have it, you’ll be required to pick up the two items on the counter to the right.

You need to use the fish wire to garrotte the first NPC wearing a white pig mask in this room. You can store his body in the container nearby. First, ensure that the other NPCs in the room don’t spot you, or this will ruin your Silent Assassin rank. Next, pick up the fish and gun that the NPC dropped.

Head outside and into the apartment building. You need to climb the stairs and get out onto the roof with the broken wall so you can shimmy along and climb up to the roof next to it using the drainpipe. Below is a map reference for this rooftop.

Once you’re onto this roof, you’ll see a guard with a blue pig mask. You need to kill him, but there’s another guard watching. When the NPC in the mask isn’t looking, subdue the other NPC. Now you can kill this pig-mask wearing NPC with the grape knife to earn your first grapevine. At this point, you’ll get an additional objective to feed the pig a third grapevine. This guide will cover all bonus objectives too.

Next, you need to move around this rooftop and get over the walkway. There’s a camera watching it, so make sure you only move across when the camera has panned away. You can enter the building by climbing the bamboo scaffolding around the corner to access the second floor. Run to the end of the walkway to the keypad and type in 2552 to enter. Below is a map reference for this keypad.

Once you’re in the room, knock out the researcher. Then, equip the grape knife and kill the NPC in the pig mask to pick up your second grapevine. Finally, hide both bodies in the locker.

To get the third grapevine, head back out the way you came until you reach the walkway with the camera. Go back across and head directly forwards. There are two NPCs on a metal staircase that leads down to the rooftop below. Throw the fish to knock out the guard without a mask, then throw the grape knife at the mask-wearing guard to kill them. Pick up the grapevine and the fish before moving on.

For the final fish, head back down through the apartment building that you walked up earlier. At the bottom of the stairs is a fuse box. Tamper with it to distract the NPC in this room, then run out and knock him out with the fish. Now you’re free to use the fish wire to kill the guard in a pig mask and pick up the final fish.

Head back to the Pig and throw all the fish and grapevines into the bucket to complete the level. The exits will appear once you’ve deposited all the food.

The second level requires you to feed the Pig two more fish and four meat bones. You still can’t change your disguise, or you’ll fail the level. From spawn, pick up every item on the table once again. Then, head down the stairs and outside. Subdue the woman in front of you immediately to make life easier later on.

Move left, and you’ll find a container with a keypad on it. Enter 0118 to get inside. Below is a map reference for this container.

This gets you into the ICA facility under Chongqing, where we’re going to acquire four meat bones. Run into the server room once you’re down the stairs and use the camera to open the vent. This gets you into a room with two pig mask-wearing NPCs and two other guards. Pick up the newspaper from one of the tables and throw it to knock out the guard standing to the left of everyone else. Then you can use the meat cleaver to kill the nearby pig mask NPC. Pick up the meat bone and then use the meat cleaver to kill the second pig mask NPC in this room. Pick up that meat bone and then exit through the vent you came through. No one will spot the bodies.

Make your way up to the main walkway through the entrance to the ICA facility. There are two guards stationed at the door ahead. Throw one of your meat bones at the guard on the left, then throw the meat cleaver at the pig mask guard on the right. You can leave the bodies here, and it doesn’t matter if the pig mask guard sees you because you’ll get your Silent Assassin rank back once he’s dead.

Now head up the stairs to the main entrance to the facility. At the top, wait in the doorway. The next pig mask guard is to your left. Wait for him to turn around and walk some of the ways down the alley before following him and killing him with the meat cleaver. Make sure you pick up the final meat bone. Hide this body behind the barrels.

Next, we’re onto the fish. Run through the alley and out of the door. If you’ve been quick, you’ll see three guards, all with pig masks on patrolling together. Bump into the one at the back of the group to slow him down and give you some space between them all.

All that’s left to do is to go back to the Pig and feed it. Once again, the exits will spawn once you’ve thrown all the food.

The final level of this Escalation requires you to feed the Pig four bananas and two grapevines. You still can’t change your suit. As with every level, pick up all the items on the table from spawn and run through the door on the right. Head down the stairs and throw the Bubble Queen Gum into the corner of this area. It’ll subdue an NPC who would get in the way later otherwise.

Lean against the container on your right and subdue the guard around the corner. Then, run around the corner and through the shortcut door to get into the lab. You need to use your camera to open the vent and get into the ICA facility via the elevator shaft. Pick up the screwdriver along the way. You can also access this area via the main entrance to the facility if you don’t have the shortcut unlocked, but you need a screwdriver to progress.

Move through the facility to the room that’s filled with computers and the tier 2 dongle. Go back on yourself and use the tier 2 dongle to access the lower part of the facility through the door on your right. Use your camera to close the windows at the bottom as you come down the stairs. Throw an item in the corner to attract a pig mask guard. Subdue him and then throw the machete at his head to kill him. Pick up the banana and hid the body under the stairs.

Make your way into the room past the stairs and come around to the left. You need to open a vent in here to progress. Below is a map reference for this vent.

Drop down the shaft and turn left. Use the screwdriver to open the vent, and you’ll see your next target. Make sure the NPC that looks into the room and directly at the target isn’t watching, then use the machete to kill the pig mask guard. Pick up the banana and drag his body out of the room to ensure it’s not seen.

To your right are the control room and a camera in the corridor. Use a gun to shoot the camera. Look around the doors into the control room and use your camera to close the windows. Go past the control room and tamper with the fuse box in front of you when the pig mask guard is stationed just next to it. Hide in the closet nearby and wait for them to investigate. When they do, jump out and kill them with the machete to pick up another banana. Wait until he’s turned the fuse box back on to avoid any extra attention.

In the next room, circle around the guards and use the screwdriver to unlock the vent. Below is a map reference for this vent.

Go up the ladder and use the screwdriver on the vent to get into the room with another pig mask NPC. Kill them with the machete to pick up the final banana. Close the windows with your camera and position the body so it won’t be seen from the outside. Then hide the body in the locker.

Head back out and through the vent with the ladder, you dropped down in earlier. Then, take the alternative path to find a ladder that you can call down. This leads to an area with two guards. Ignore them and exit the area via the gate door. Below is a map reference for the ladder to get into this area.

You need to go up to the rooftop via the apartment building as you did in the first level. Repeat the process on this roof to subdue one guard and kill the one in a blue pig mask for a grapevine. The second blue pig mask NPC is on the second staircase on this rooftop. As you climb up the drainpipe, there’s a brick to your right. Use this to knock out the guard and then throw your grape knife as you would normally.

Go back to the Pig and feed it all the food it wants. The exits will then spawn, and you’ll be able to finish the Escalation. Completing this Escalation unlocks The Maximalist Shotgun, The Profligacy Suit, and the Bubble Queen Gum sedative.