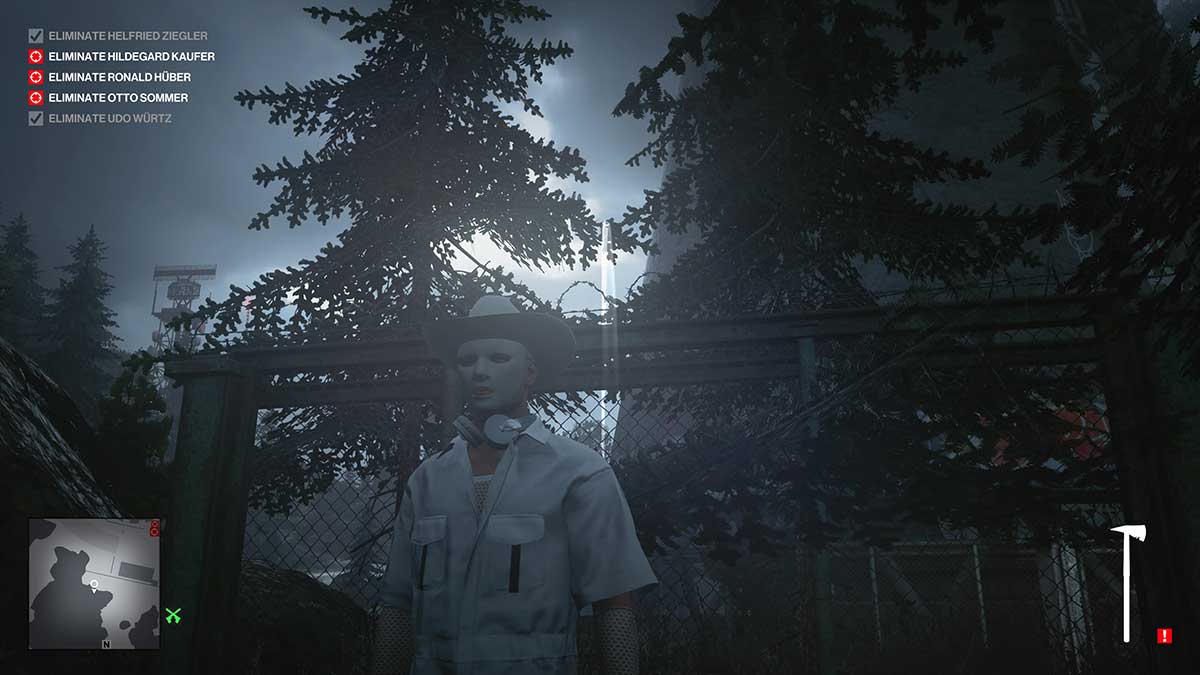 DJ Axe Party is a Featured Contract in Hitman 3 that was added by IO Interactive developers during the Season of Envy. The Contract requires you to kill five targets by throwing an axe at them while dressed as the DJ from the Berlin location. This guide covers how to complete the Contract with a rank of Silent Assassin.

There are only two things that will make your life easier with this Contract. We recommend using the DJ Booth starting location because it gives you the DJ disguise without any effort. You should also bring as many coins as possible with you. If you need more, you can unlock the Greedy Little Coin from The Greed Enumeration Escalation.

Before you do anything else, head upstairs and leave the club through the main entrance. You need to collect the Old Axe, which is behind the large pipes to the club’s side in the overgrown area. You can get to the weapon without meeting anyone, so it doesn’t matter that you’ll be trespassing. Below is a map reference for this location.

Once you have the axe, you can make your way back to the car park. Now, you need to get the first target, the one that’s walking around this area, further back so that you can kill them. Use your coins to distract them to the edge of the site, then use the coins again to distract them further. You can do this a few times to get them behind a wall. Once they’re out of view, throw the axe at their head to kill them. Keep to the left of the car park and hide the body around the cars. No one comes back here, so the body won’t be discovered.

Your third target is the one near the bicycle exit to this location. You need to run along the edge of the car park and then out through the fence into the woods. Follow the fence along to the leftmost edge of the area, then throw the axe over it and onto the road.

Next, run back into the area and get to the axe. You need to draw the target onto this road and away from the crowd of people. Use the coin to do this with a few flips. Once they’re far enough away from the crowd, pick up the axe and throw it at them. You can drag the body further up the road, but don’t go too far or you’ll exit the mission.

From the location of your last kill, throw the axe over the fence to your left. This means it will land under the large structure on the other side, moving the axe into the area we need it next, but we won’t be using it until we’ve subdued the targets.

Your final targets are sitting on a bench facing the direction you need to approach with the axe from. Instead of bringing the axe over first, run up to your targets, then move past them and hide around the corner in the small concrete rectangle behind them. Use a coin to draw each target to you and subdue them. Hide their bodies around the back of the large container.

Now, you can run over and pick up your axe. Stick to the wall as you approach the location where you’ve left your targets. You need to throw the axe across the gap in front of the guards that you’ll pass. Don’t let them see you. Otherwise, you’ll lose your Silent Assassin rating.

Finally, you can pick up the axe and throw it at your targets while they lay helpless on the floor. This might seem cruel, but it completes all the objectives on the Featured Contract for a nice boost to the experience you’ll gain from it. Use any exit you want, but the bicycle is the closest and fastest to get to.