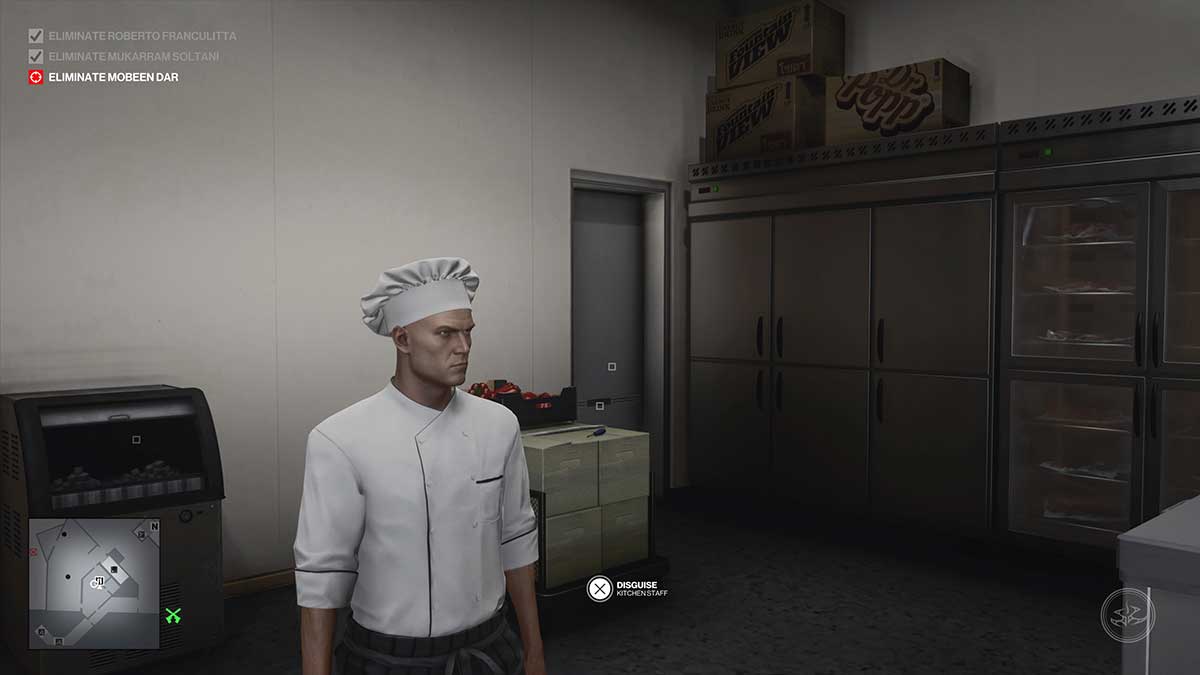 The three essential items for this route are a pistol, the Goldbrick Proximity Mine, an explosive sedative device, and a coin. We’ve opted for The Profligacy Suit from the Gluttony Gobbling Escalation because it looks brilliant for the short time you wear it.

The first kill is time-sensitive, so rush up the stairs from your starting location in the Atrium and turn left. Next, you need to go towards the Black Gold bar and then up the stairs by the blue curtains to the bar’s left. At the top of those stairs, turn right and go towards the door at the end of the hall. Just outside of the door, crouch down and place your pistol on the floor.

Now go through the door and close it behind you. This will cause the guarded NPC to pause for just long enough to allow you to lean against the wall inside this corridor and take out the patrolling guard. Then, drag and hide his body in the locker down the hall.

Go back to the elevator here and wait around the corner from the door for the usually guarded NPC to come through. He won’t notice that you’re trespassing as he walks towards the locker you’ve just hidden a body in. Subdue him and place him in the locker as well. Then, the guard should walk through the same door, and this one’s your first target. Subdue him and then snap his neck. The locker is full, so drag him through the doors at the end of the corridor and place his body in the container to the left. Change into his outfit once you’ve done this.

Step 2: Get the kitchen staff disguise

Go back into the corridor and head down the stairs at the opposite end. The first landing has a door to the laundry room in it. Go inside and subdue the NPC in here before dumping their body in the container. Now go back upstairs, and you’ll see a janitor looking at a vending machine. Subdue her and drag her body down to the laundry to dump it in the same place. These NPCs will get in the way later, so we need to remove them now.

The next NPCs to take out are the guards at the very bottom of the staircase. There will be two having a conversation in the corridor just outside the kitchen, where your next target is working. Go into the toilet in this corridor and use the coin to draw one guard over to you. The second guard will walk away, allowing you to subdue this first one and hide them in the toilet. Wait for the second guard to come back, then distract him to the end of the corridor, near the bathroom, before subduing him and hiding his body in the toilet too. Finally, there’s a female kitchen worker in the kitchen. Draw her out with the coin, then into the corridor, subdue her, and hide her in the toilet.

Now go into the kitchen and close the door to the locker room. Use the Goldbrick Proximity Mine on the male kitchen staff in here to knock him out. Then, take his disguise and pick up the kitchen knife from the nearby table. Since the device you’ve used is a sedative, it won’t matter if anyone finds the body. However, this can be inconsistent. To save time later, open the door to the locker room and use a coin to draw an NPC to the sleeping man’s body. They should discover it and alert a guard, who will wake him up. If you lose your Silent Assassin rating, you’ll have to restart the Contract, but that shouldn’t happen if the game is working correctly. If this keeps happening, try alerting an NPC to the body before taking the disguise. There should be enough time for this.

With your new disguise on, go back up the stairs and out to the container where you dumped your first target. There’s a ladder to the right of the door that you need to climb up. Make sure no one sees you doing this since you’ll be trespassing in this area. Below is a map reference for the ladder.

Once you’re up the ladder, look right. A guard will start a phone call as soon as you’re up there. Wait for him to look to the right, then vault the railing and subdue him. Hide his body inside the security office through the door on this floor. The other guard in the room won’t notice you do this. Leave through the door you entered and pick up the penthouse keycard the guard dropped.

Now you need to go down the corridor ahead of you to the penthouse suite door. A guard is standing at the top of the stairs, walking to the right and standing there for a short while before going back. Wait for him to go to the right and sneak past him. If you subdue him and leave his body there, then it will be discovered shortly.

There’s a camera in the corridor, so use one of the pistols you’ll have picked up from the guards earlier to shoot it before running to the penthouse suite door. Then, use the keycard to open the door and go up the stairs. At the top of the stairs, go through one door ahead of you and then the door on your left. There’s an NPC in here that you need to subdue and hide inside the freezer.

The chef is in the room next door. Open the door to the kitchen and draw him in by flipping a coin. Hide and wait until he’s inside, then use a second coin to draw him in further. Once he’s into the room and out of sight from anyone else, walk up to him and stab him with the kitchen knife. Even if he sees you, you’ll retain a Silent Assassin rating once he’s dead. Hide his body in the freezer and take his outfit.

With your new disguise in hand, make your way downstairs. Turn right at the penthouse suite door. You can walk in this area because you’re not trespassing. Wait for the guard on the stairs to walk away before going down them. Shoot out the camera on these stairs, or all of this work will have been for nothing. Since you’ve taken out all the NPCs who might spot you, it’s possible to run down to the kitchen.

If you woke your target back up earlier, which we recommend you do, then they should be walking around in the kitchen without a care in the world. Get behind them and kill them with the kitchen knife. Then, you should be able to leave through any exit you choose. This will complete all optional objectives for the Featured Contract, earning you the highest score possible.