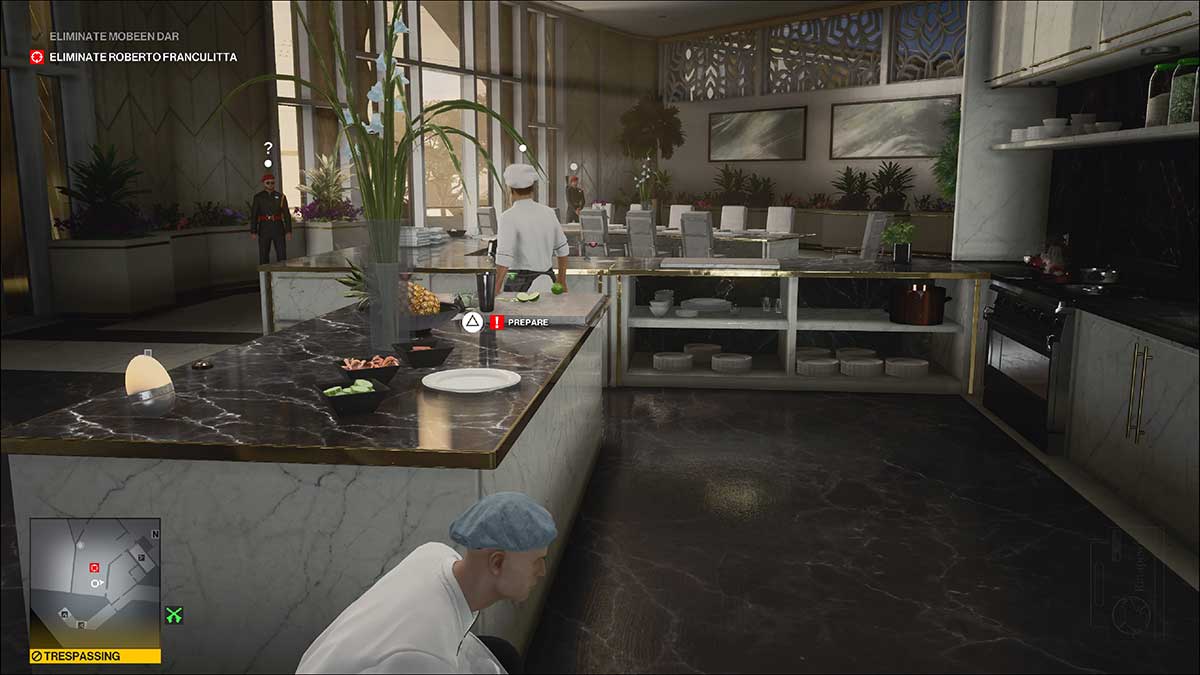 Hitman 3 has five new Featured Contracts courtesy of the MinnMaxShow this month. While the third one, Two Ends, is definitely the toughest, the fourth one is no walk in the park. In this guide, we’ll show you how to complete the Minnsnaps Featured Contract with a rank of Silent Assassin.

This Featured Contract is deceptive in its simplicity. You need to kill Mobeen Dar with an optional method of nothing but Agent 47’s bare hands. The second target, Roberto Franculitta, needs to be killed using lethal poison to complete one optional objective, with the other being that Agent 47 wears the Kitchen Staff disguise.

The loadout for this Featured Contract needs to contain the Lethal Pills. This is how we’ll kill the second target and meet the secondary objective requirements. If you don’t have them, then keep earning experience throughout Hitman 3. They’re an item you’ll unlock around level 40. The starting location we’re going for is the Atrium because it’s perfect for this run.

This is the only item that you need to bring with you. We’ve packed a snow globe for good luck.

We need the Kitchen Staff disguise, so we have to reach Mobeen Dar first. Head up the stairs from the spawn point and turn left. You need to run back on yourself on this floor towards the back of the hall.

At the back here is a door locked by a passcode. Interact with the keypad and type in “4706.” The code will unlock the door and allow you to get inside. There’s no one to spot you as you enter through the door, so get in and turn right.

Below is a map reference for this door’s location.

Stop at the end of the hallway. There’s an NPC fixing the elevator and a waiter on his phone. You can sneak between these NPCs without being spotted. Do so and get through the kitchen door. It’s behind the waiter on the right in the image below.

Once you’re inside the kitchen, use the equipment as cover from your target. He might be standing in a position where he’ll see if you get too close, so wait for him to turn his back. When he does, sneak up and hide behind the table behind him.

Subdue the target and snap his neck. This will count as an unarmed kill. Don’t worry about the other NPC in the kitchen. He never moves far enough to spot you.

Drag the body towards the stairs in the kitchen. If you’re worried, you can close the double doors to the locker room. Once again, though, these NPCs never move enough to see you.

Once at the top of the stairs, leave the body and check if anyone is on the other side of the double doors. There’s a waiter who will walk in and out of the storage corridor there. He’ll spot you if you drag the body now.

Instead, wait until the waiter leaves and heads back out to the bar. Go through the double doors and hide behind the black catering equipment on the left. Wait until he comes back in. Now you can subdue him.

You can leave both bodies in the far corner, in the top left of the image above, by the drinks table. No one comes through this area, so no one will discover them. Make sure you put on the Kitchen Staff disguise before you leave.

Step 3 – Get to the penthouse

With this disguise on, you can leave through the door the waiter was using earlier. Make your way left from this bar and into the Black Gold Bar. You need to walk up the staircase behind the blue curtains to the left of the main bar.

At the top of the stairs, turn right and head for the double doors. Use instinct to check that no one on the other side will spot you. Then, rush through those double doors and through the second set beyond them.

Beyond that second set of doors are some metal stairs. Climb these and pause at the top. This is a technician’s workshop where you can hide behind some equipment for a break.

When the technicians are working at their machines, move left around this equipment towards the blue toolbox. Pick up the crowbar.

Now turn around and vault over the railing with a blue tarp over it. You should be able to see a balcony. To the left here is a camera along the corridor. Shoot it now, so you don’t need to later.

There’s a guard to the right of the balcony stationed by some stairs. Wait for him to move away to the corner, so he has his back to you. Then you can vault the balcony and run left, away from him.

Keep running left until you come to the penthouse door. It will be on the left-hand wall. You can use the crowbar to break in here.

Below is a map reference for the penthouse door.

Run up the stairs and through the door at the top. Now there will be a door on your left. Go in here, but be careful because there’s an NPC stacking items on the shelves.

You can take this guy out and hide him in the freezer in this room. No one will notice.

Now go to the door to the kitchen. It’s the metal one directly opposite the door you entered this room through. This will trigger a conversation between a guard and your next target.

Wait for the conversation to play out while watching what’s going on through instinct. When it’s over, the guard will walk away from the counter. The chef may have a drink, but then he’ll move to the hob to cook.

As he does this, sneak in and poison the water bottle. You need to poison the one on the chef’s side of the counter, if not, you’ll kill the wrong person.

As soon as you’ve done this, rush around the counter to avoid being spotted. While the guards may notice you doing this, it won’t prevent you from killing the chef.

Head back out of the kitchen through the door you used to enter it. You need to get out of here as soon as possible. The chef will die as soon as he drinks, and that will trigger a big search.

Return using the penthouse stairs. Use instinct to make sure no one is coming up. Otherwise, you might get spotted. At the bottom of the stairs, turn left. Use your camera on the window here to open it.

Vault out the window onto the scaffolding. After that, vault out of the scaffolding to the left in the image above. Shimmy along the ledge here, slide all the way down and then shimmy all the way back. This is an easy path to follow, so you won’t head the wrong way.

Eventually, you’ll come to another scaffold. Vault inside and use your camera to unlock the window.

Wait for these NPCs to finish their smoke. While your current disguise is allowed to be in this area, it’s better to avoid any suspicion. When they’ve left head through the doorway behind the NPCs in the image above.

Go up the stairs and into the storage room. There’s an NPC in here who can see through your disguise. Take him out and store his body in the laundry bin in the same room.

You can exit through the black and gold door. This leads to the bathroom for the Black Gold Bar. Now you can choose whatever exit you want to take. We’d recommend the Atrium though, simply because it’s closer and the safest option.