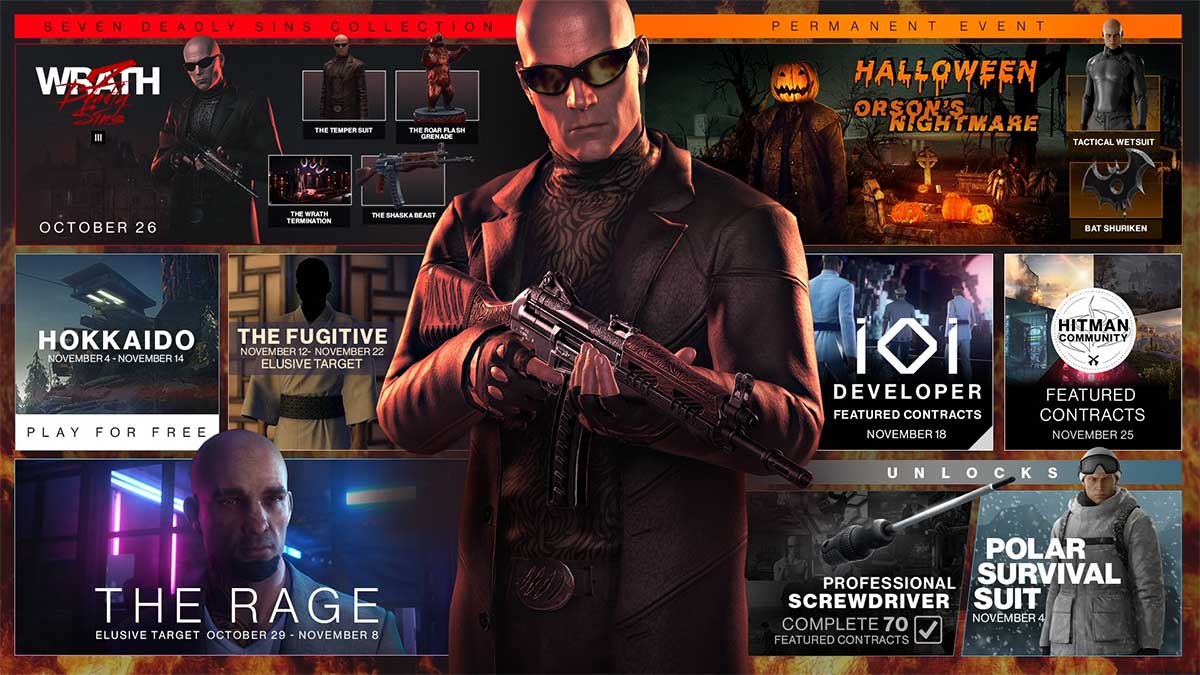 Hitman 3 Season of Wrath kicks off on October 26, bringing roughly one month of new content for the game. While much of the content is what you’d expect if you follow each season, there are a couple of surprises that developer IO Interactive has been keeping quiet.

From October 26, players will be able to access The Wrath Termination. This is the Wrath-themed Escalation for the season, with three levels in which Agent 47 must prepare to defend himself from an invading force with only the items he can find around the revamped Dartmoor location. Completing the Escalation awards players with The Temper Suit, Roar Flash Grenade, and Shaska Beast assault rifle.

This season, players are treated to a spooky returning Escalation from Hitman 2 called The Mills Reverie. In it, they’ll play through a unique version of the Hawke’s Bay location from Hitman 2 and complete various creepy tasks. This Escalation and the two rewards it brings, the Bat Shuriken and Tactical Wetsuit, are free for all Hitman 3 players.

The first Elusive Target this season is The Rage. Set in Chongqing, players will hunt down an ex-boxer who took a fight too far. Agent 47’s client is out for revenge before he does it again.

The Polar Survival Suit is a new outfit to unlock for Agent 47. However, you won’t be able to claim it until a new challenge is added to Hokkaido on November 4. Complete the Ice Cold Cowboy challenge, and you can unlock this new suit for your collection.

Play for Free Hokkaido: November 4 to 14

From November 4 to 14, all Hitman 3 players can access the Hokkaido location from Hitman 2016 at no extra charge. This allows everyone to experience everything this location offers, including the second Elusive Target for the season.

The Fugitive is the returning Elusive Target for the season. It’s set in Hokkaido, meaning all Hitman 3 players have a chance to experience it for at least two days. The target is undergoing facial reconstruction surgery, meaning they’re difficult to identify unless you use the clues you’re given in the mission briefing.

The first batch of Featured Contracts this season will be produced and chosen by IO Interactive developers. This was the case last season, and the Contracts ended up being much more challenging as a result. This round of three will be inspired by either Wrath or Halloween, whatever the creator chooses.

A new reward will be made available to those players who complete every Featured Contract in the game. The Professional Screwdriver will be yours if you complete 70 Featured Contracts. Note that there won’t be 70 available until partway through Season of Wrath.

The second round of Featured Contracts for the season comes straight from players. They will also be themed around Wrath or Halloween and could take you anywhere across Hitman 3’s expansive list of locations.

We don’t know what will come to Hitman 3 following the Season of Wrath. In the past, IO Interactive has added several Christmas-themed experiences to Hitman 2016 and Hitman 2, but we’ll have to wait and see what happens for Hitman 3’s first holiday season.