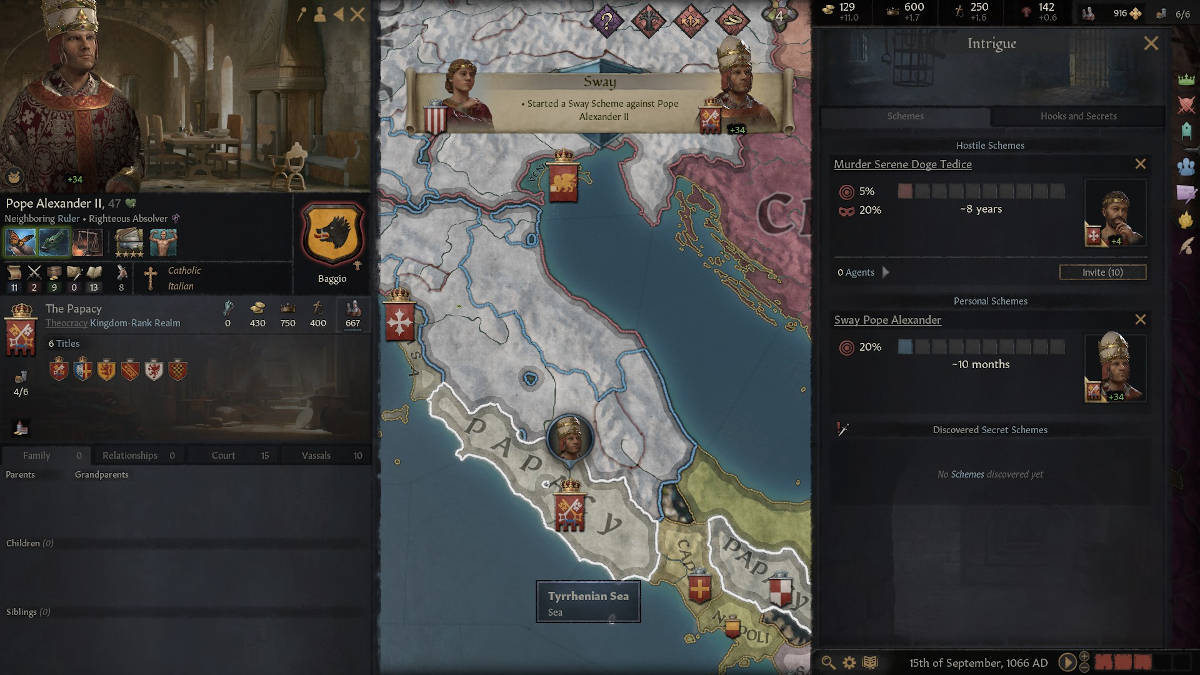 Crusader Kings III has shifted up the character scheming considerably. In Crusader Kings II, players had to choose a focus that unlocked more potential schemes, while others only had the assassination plot attempt. Now, Crusader Kings 3 has way more options, and two very different types of schemes altogether.

Crusader Kings III majorly switches up how scheming works. There are now two different types of schemes that every character can perform. These two categories are Personal and Hostile schemes. A player can choose to get involved with both types of schemes at the same time if they so choose.

Personal schemes relate more to character development. There are several options, like swaying someone’s opinion of you, seduction, romance, and friendship. However, players need to meet some conditions before they can perform specific schemes.

The seduce and sway schemes are open to all players at all times. These two are the basic options. Sway is the general option that only aims to improve relations with character, while seduce opens up more personal scheme options.

The romance option allows the player to attempt to get a character to become their soul mate. This is one of the ways players can get the marriage they choose, even if it was not previously an option. This option is only available to characters of the opposite sex. Players wanting to get these options will need the person to have a high opinion with you. Furthermore, seducing someone beforehand makes it easier, as that generates opinion and interest in your character.

The befriend option is only available to players who gained the perk from the diplomacy lifestyle. The perk is all about making friends in the game, which is a useful way of managing realms. Not to mention, friend events benefit stress and lead to other interesting in-game events.

Finally, there is the elope option. After making a character in a foreign land your lover, players can try and get that character to their court and pursue marriage. It’s certainly an interesting way of getting a partner that was otherwise inaccessible through the find marriage or betrothal feature.

Murder plots are the standard murder attempts that can get a rival, heir, or other person killed. This is easy to do and is always available for players. However, you can only attempt to kill the target once every 10 years. So removing the plot from your current hostile scheme will prevent that option from becoming available for some time.

Both abducting players and fabricating hooks on players are two options that need to be unlocked through the Schemer tree under the Intrigue lifestyle. Abducting players attempts to imprison players that have otherwise done nothing wrong, while hooks are tools to use for your leverage.

Finally, the claim throne option is only available to players who took meritocracy under the Administrator tree in the Stewardship lifestyle. This allows players to attempt to seize the throne of their current liege and take his primary title. This requires agents and lots of learning to pull off correctly.