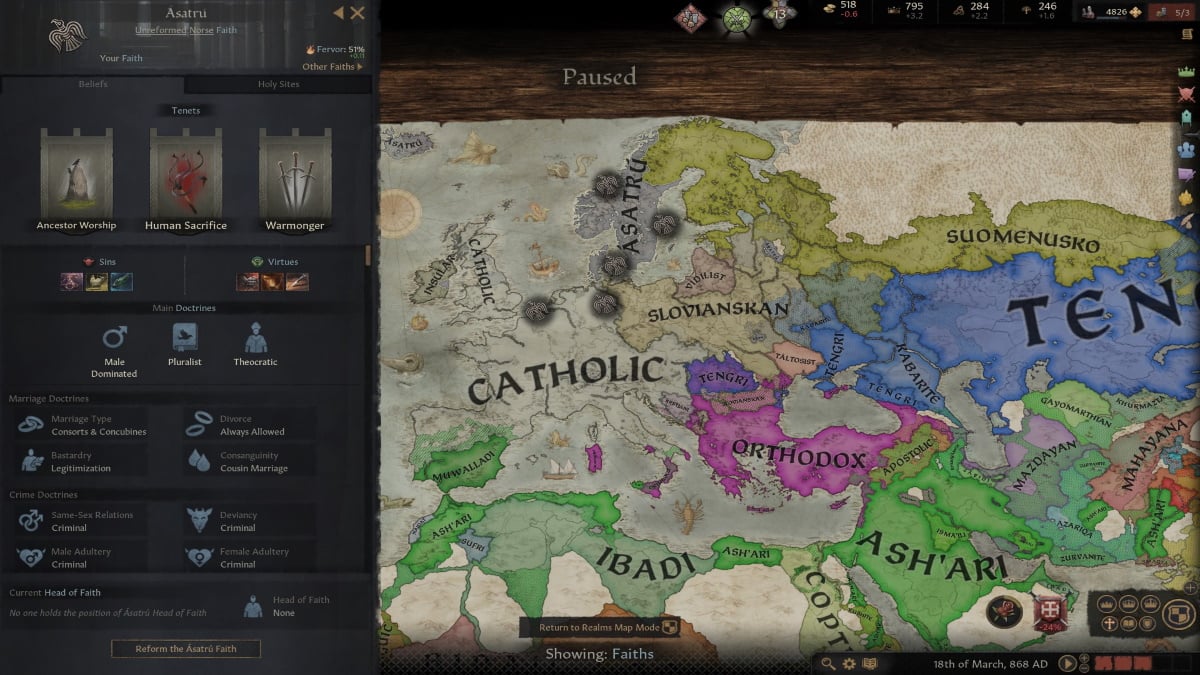 Your character might be the King of Scotland in Crusader Kings 3 but doesn’t mean they started in that land and was born there. They might be a foreign ruler who fought the previous leader, won, and is now the head of a brand new territory. The previous leader likely had a differing faith and culture than you. If the populace doesn’t align with yours, controlling them becomes more difficult. Your culture and religion also determine what your people can build, what technology they’re learning, and how your primary ruler gains piety.

Why does culture matter?

All the information regarding your character’s culture is on the screen’s lower left-hand side, represented by the candle icon. Click on it to learn about who is the head of your culture. The culture head determines the culture’s fascination, which is the technology they are most likely to learn. The screen also shows what technology your culture has learned so far, and their overall progress towards each one.

Your character’s culture determines how others view you and how much control you have over counties you control. For example, suppose you are of the Norse culture. In that case, more often than not, other rulers will be against you and likely view you negatively. You usually have a negative opinion score with a character of a differing culture. You might find you have no allies in a territory you recently conquered because no one around you has the same culture, meaning your time there could be pretty short.

The same culture problems happen with the citizens of a title you have. If you control a county in Scotland, and the citizens are Gaelic, and you’re Norse, the citizens won’t want to listen to you. You need to try converting them to your culture using your steward or your marshal to increase your control. You can do this from the council page. Your steward has a special task they can do at the bottom of their three options to visit a county to convert their culture. It will take several years. Your marshall can also visit a county to do the same thing, but they go in and increase your control, not change the population’s culture.

How does faith work?

Faith is likely to come up more often than your character’s culture. Your character’s faith determines who they believe in, what gods they worship, and how they conduct themselves. Next to the culture icon, the lower left hand of the UI is your faith. The icon for it will be different, depending on your character’s faith. Clicking on it brings up the faith screen, showing you who is the head of your faith, the faith’s tenets, disapproving and approving character traits, and main, marriage, crime, and clergy doctrines.

These come in handy to understand for you to determine critical choices for your character. For example, if during a war, your character captures a key prisoner, you have the choice to ransom them, negotiate for their release, or execute them. If you are of the Ásatrú faith, you can choose to execute the prisoner without consequences and actually gain piety. You also gain piety by engaging in wars, and continually fighting enemy nations. Other religions have to use piety as a currency to sometimes battle, depending on the faith and why they want to go to war.

Certain faiths are natural enemies of one another, such as Catholicism viewing Ásatrú as evil. Suppose Catholicism has enough fervor against another faith. In that case, they can choose to engage in a Holy War and go to war against any ruler who believes in that particular faith.

You want to be careful when playing a smaller faith. If another views you as evil, it’s sometimes better to not give them a reason to fight against you.