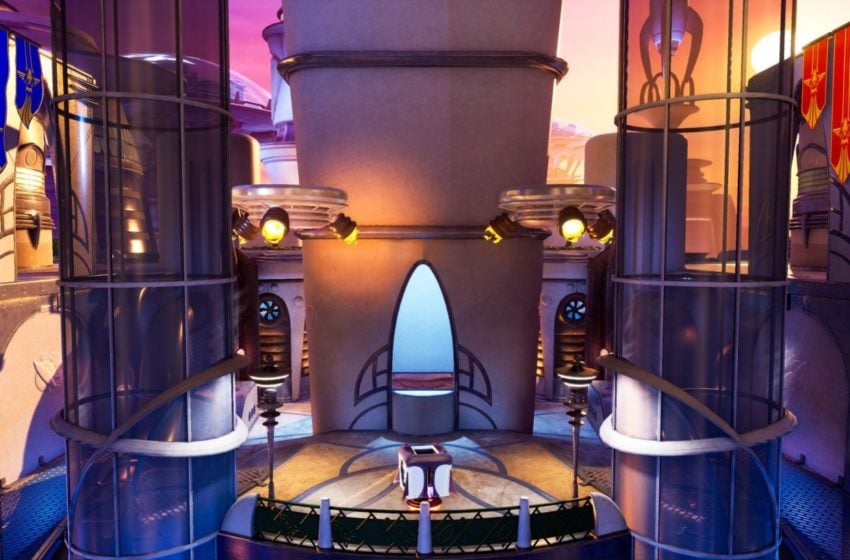 It’s time to have a blast in Rocket Arena — and yes, that pun was intended. EA’s 3-on-3- shooter is the latest game to muscle in on the online multiplayer market, and the key to its success will rely on its gameplay mechanics and content.

Part of the content will be how many maps there are to play Rocket Arena‘s game modes. Things could get stale quickly if there are only two or three available, so how many are there? Let’s find out together, rocketeers.

Every map available at launch in Rocket Arena

There are 10 maps available at launch. Each one is set in Crater, Rocket Arena‘s homeworld, and they are comprised of different locales that will give you the edge in battle if you know how to utilize them.

EA — as well as developer Final Strike Games — will be adding more maps periodically. For now, though, the 10 listed below are what are available to choose from.

The home city of Rocket Arena hero Jayto. Apogee Acres is full of defensible windows that you can open and close using your rockets. Learning how to navigate this arena using these windows will help you come out on top in Rocket Arena‘s different game types.

Frostwind Grove is a settlement built around a giant tree. You can use the central structure to avoid incoming fire and surprise your opponents with an unexpected attack. The spire’s secret passageways will also be key as you can use them to outmaneuver your foes and win matches in Rocketball and Mega Rocket.

An airship level that is bound to result in plenty of havoc where rockets are concerned. The ship is surrounded by smaller vessels that rocketeers can jump between, and they provide handy spots to recover in away from the glut of the action. Just be careful to watch your step here as one false move can lead to a self-imposed death.

A semi-enclosed locale with a giant statue at its center. Items are available near its center to give you the edge in combat and keep an eye out for the UFOs that fly through occasionally. They’ll provide cover for you, and give you opportunities to platform your way towards opponents to knock them out of the ring.

An icy map — a given with a name like this — that has plenty of jump pads available. Ensure you use these pads to your advantage. You can get the drop on your foes from up high, spring to safety if you’re running low on health, or work your way across the map in double-quick time.

A desert-inspired map, Megadon Junction, has an express train that drives through the heart of this level. Keep out of its way, or you’ll be sent flying by this locomotive and its cargo. It’ll provide you with cover if you need to regain your senses too, so listen out for its horn and prepare to duck if you need to time to recover.

An underwater map might seem odd for a rocket-propelled game, but Rocket Arena has one. Keep your eyes peeled for geysers that give you some vertical lift, or the Crystal Subs that allow you to jump off them. Either way, getting some air will give you a bird’s eye view of proceedings to get the drop on the opposition.

Located in the Crystal Reef, the Star of Crater is recognizable by the giant crystal at its core. This map is composed of rocky outcrops punctured by holes. Use these places of refuge to dodge incoming rockets before firing off your own arsenal.

There are plenty of places to hide among the Megadon’s giant skeleton and the digsite in Stompy’s Refuge. With so many areas to dodge enemy fire, you’ll have a hard time defeating other players in Knockout mode. This one is best utilized for game modes like Treasure Hunt instead.

This jungle-themed map is full of perils. Not only will you have to contend with enemy rockets, but you’ll also have to avoid traps and other dangers hidden in the foliage. A perfect map for Knockout mode, however, if you can blast your opponents into one of these secret traps.