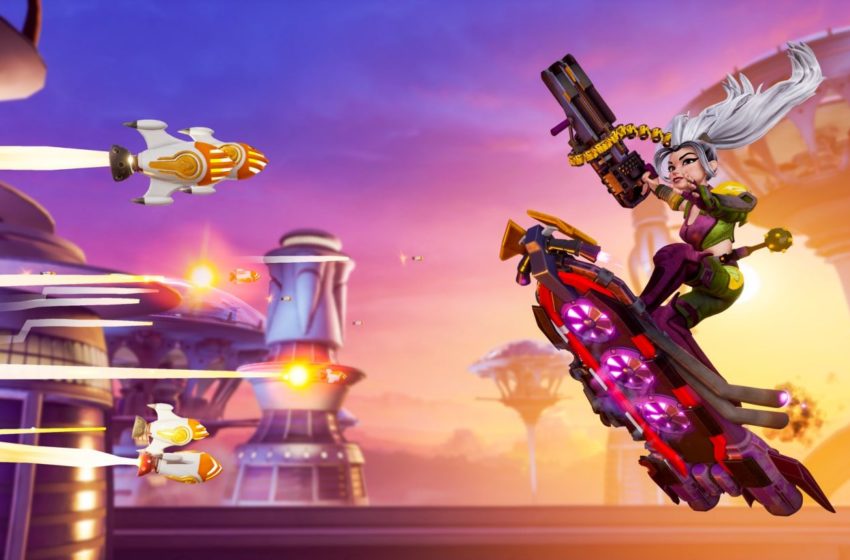 Rocket Arena is shaping up to be a ton of explosive fun. EA’s 3-on-3 multiplayer shooter is getting released on July 17, and there will be plenty of game modes to keep you occupied once it’s launched.

If you’d like to get the lowdown on what’s available before it arrives, we’ve got you covered. Lock and load with us to find out what game types are available to play.

What game types are available in Rocket Arena?

There will be five main game modes in Rocket Arena when released on PlayStation 4, Xbox One, and PC. Those game types are Knockout, Rocketball, Mega Rocket, Treasure Hunt, and Rocketbot Attack.

Game modes can be played in Social or Ranked modes too. Social allows you to try out game types, heroes, and more without a competitive edge. Ranked, meanwhile, is only available in Knockout, Rocketball, and Mega Rocket. You can rank up to level 50 in this trio, and you’ll get rewarded for doing so.

Let’s take a look at what each one will entail:

Knockout requires you to, well, knock your opponents out of the arena. Teams can use their rockets, abilities, and items to launch opponents out of the designated zone, and you’ll receive points via ‘knockouts’ for doing so. The first team to reach the required score wins the match.

If you’ve ever played Rocket League or something like Grifball in Halo multiplayer, you’ll understand what this mode is about.

Two teams are tasked with picking up the titular item and scoring it in the opposition’s goal. You can score a goal by running it in, throwing it in, or blasting it in using your rockets. The team that has the highest score at the end of the round, or the team that reaches the required points total before the timer ends, wins.

In Mega Rocket mode, a giant rocket crashes into the arena and sends every player flying across the map. Once it has landed, a capture zone is set up. Like other capture point modes in other games, the goal is to defend the zone or capture it for your team. Once you’ve captured one rocket, another will land elsewhere, and the cycle begins.

The team that has captured the most rockets by the end of the match, or reaches the points cap before time runs out, will be crowned the victor.

This is an amalgamation of a coin pick-up based game type and an item capture one. In Treasure Hunt, you’ll score points for your team in two different ways:

The team with the most points at the end of the game wins.

This is a cooperative game mode rather than a competitive one and is a slight variation on Knockout. The goal of this game type is to simply knockout all of the Rocketbots before the time runs out.

The School of Rockets center will also be available to practice your skills, play the tutorial to learn the controls, or build custom games for you and your friends to partake in. It isn’t a game mode per se, however, but you can build custom games from the above game types to make something unique.