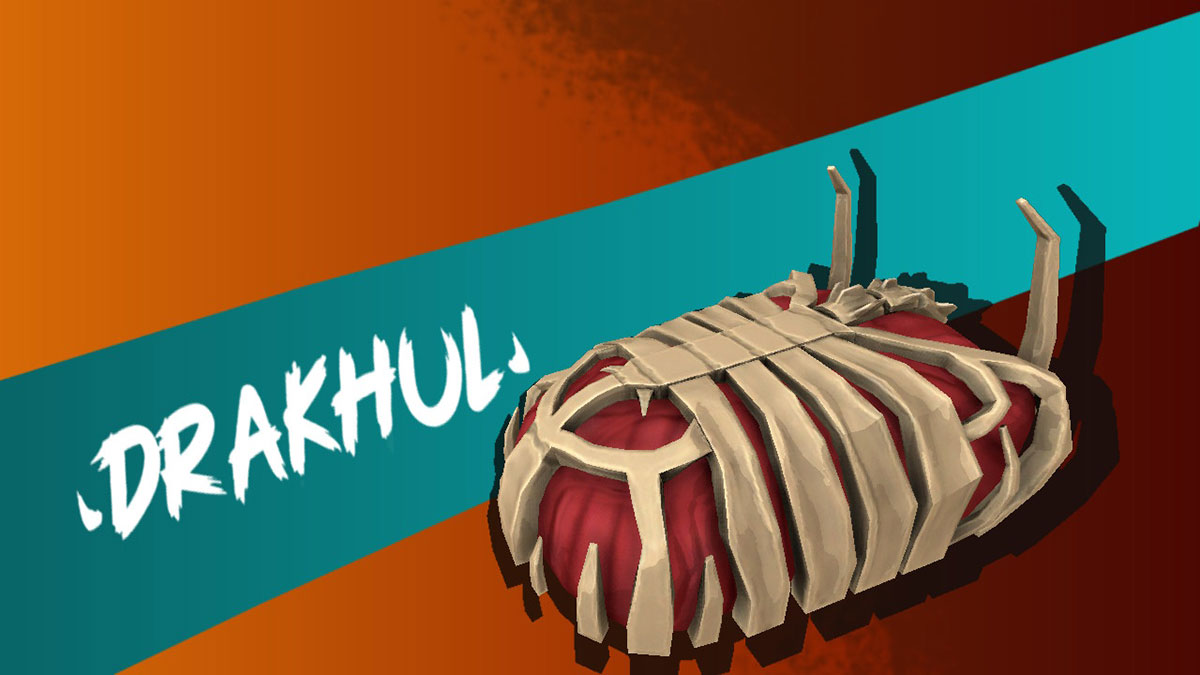 Drakhul is the first boss in Godstrike with a visual gimmick. The creature you see in its title screen is not its final form. To top things off, you’ll have to battle both the arena and Drakhul. In this guide, we’ll outline the three phases of this fight and provide some tips on killing the boss.

Much like our loadout for Tutoriaal, we don’t recommend using any powers for this fight. Equip all the passive abilities you have, but losing time for the sake of a momentary attack boost will take more from you than you have to spare. This battle is about precision shooting and timed movement, none of which requires a Singularity Beam.

The first phase of this fight is a joke in two ways. The first is that the boss is a pushover. It’ll sit in the middle of the arena and fire waves of red orbs around itself. Move to the right-hand side of the arena, the position you can see in the image above, and sit there while you fire at the boss.

There’s a gap in the orbs here that will allow you to stay still whilst avoiding all incoming damage. You can defeat the first phase in less time than you’d spend equipping Singularity Beam, which gives you more time for the two more difficult phases.

The second way this phase is a joke is in appearance. It’s lulling you into a false sense of security. The real boss shows up next.

In this phase of the fight, a semi-circle of the arena appears around the original island’s bottom edge. This is meant to encourage you to move away from the boss, but that can hinder some cases.

Drakhul’s attacks during this phase are as follows.

As soon as the phase begins, Drakhul will summon three blue ghosts. These will be present throughout the phase and will cause damage if they touch you. There’s nothing you can do to get rid of them, so avoid them.

After this, the Laser attack will be used. This follows you through 120 degrees or so. Drakhul telegraphs the move by holding its mouth open. The laser follows you, so move away to your left or right until the attack is over. It’s an easy one to avoid.

Now the boss will cycle through summoning blue and purple ghosts. The blue ghosts are summoned in a line and will pause for a second before flying to the opposite side of the arena. These will hurt you if you’re hit, so track their position and make sure they pass you by harmlessly.

The purple ghosts are more dangerous. Drakhul will first summon one from its mouth. Since you’ll be firing at it constantly, you should destroy this one as it’s summoned. Three more will be summoned at random points around the arena after that.

Purple ghosts will fire orange orbs out in bursts every few seconds. Luckily, you can destroy them. Do so as quickly as possible. The damage they can cause is more important to avoid than the extra precious few seconds of damage you can deal to Drakhul.

Keep this pattern up, and you’ll eventually enter the final phase.

This phase of the fight is definitely the toughest. The middle of the arena disappears into the lava, so you need to get off of it as fast as possible. The boss has a couple of attack patterns that it will move through.

The first pattern the boss will go through is the easiest. Drakhul will charge you a few times. This is easily avoidable. Just use the arena’s shape to your advantage. Even if you’re only slightly above or below the boss, you won’t take damage. Do this three or four times.

Now, Drakhul will generate a rocky shield. This is the same type used by Tutoriaal. You can shoot it, but when the rocks are destroyed, they spray orange orbs. The boss will fire lines of more orange orbs at you for about 20 seconds while it’s sat here. You should fire at the boss and break through that shield. Then, avoid the lines of orbs it shoots, but keep up your attack so that you’re dealing damage.

The second pattern sees the boss fly to the middle of the arena and create a circle of orange orbs. These won’t hit you, but the rain of orbs from either side of the arena will. Keep up your attack and swerve through the orange orbs as they come towards you. It’s quite easy to avoid taking damage.

Keep up your defensive maneuvers, and you’ll melt this third phase with time to spare.