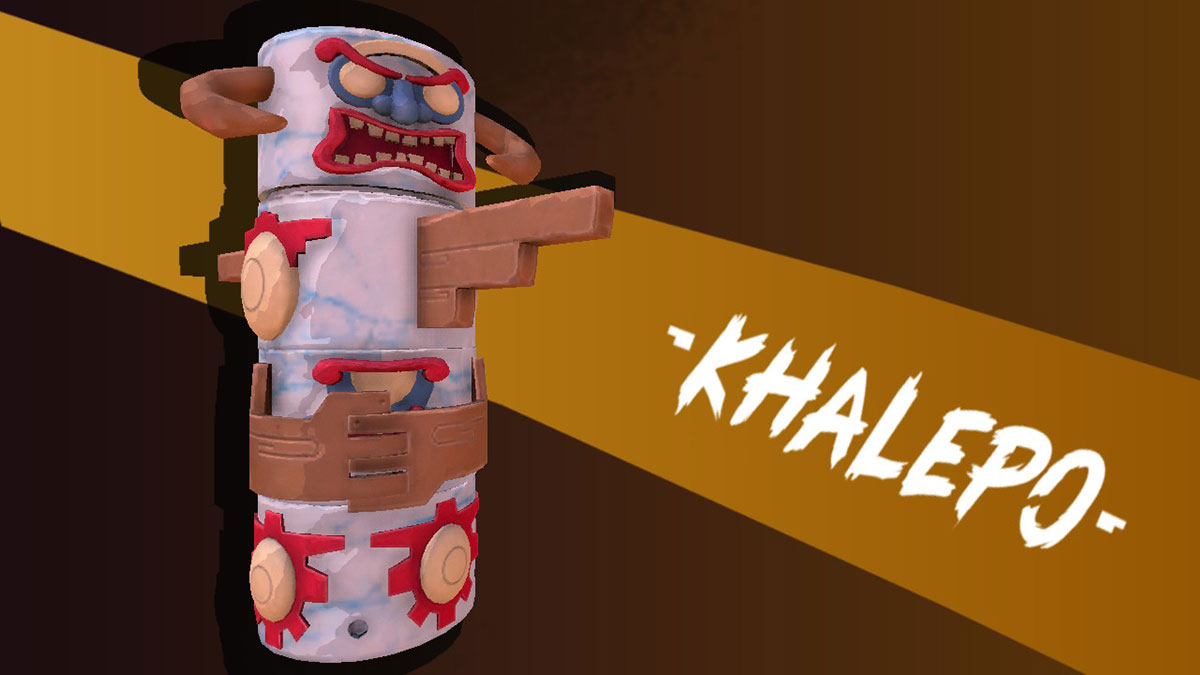 Khalepo is the second boss you’ll face in Godstrike. This boss fight has four phases, each presenting you with a new challenge to overcome. It’s also the first that you’ll find a power essential for. In this guide, we’ll outline the best method for taking this boss down as fast as possible.

As with all bosses in this game, equipping as many passive abilities as possible will only help you. They don’t cost time to take into a fight with you, so there’s never any harm in strapping on every single one you have just in case they’ll help.

In terms of powers, you should only bring Singularity Beam. This power makes you temporarily invincible for a short time whilst blasting a massive laser. You can redirect that laser, and it deals enough damage to Khalepo to remove a quarter of its health. Equipping this power will set you back by 30 seconds, but it’s a sacrifice that you’re going to have to make if you want to succeed.

In the first phase, Khalepo has two main attacks. These interlink with each other, a lesson you should take with you through all of its other phases. The attacks are as follows.

Khalepo will rely heavily on its Burst attack. This sees it blast waves of orange orbs at you. Each one sees the orbs shift a little in their pattern, meaning that there’s a path for you to weave through and totally avoid taking damage. It takes a lot of practice to get this dodging sequence right. Continue to fire at Khalepo whilst you’re moving because you want to get through this phase as fast as possible.

If you see any blue material fall to the ground, pick it up when you get the chance. This will charge your power.

Once the boss has finished a Burst move, it will shoot using the Purple Orbs move. This will see four purple orbs shoot out to the edge of the arena. When they hit, they’ll send semi-circles of orange orbs blast inwards. The pattern of these orange orbs is easy to track. Move to a point where the orbs from both sides of you won’t hit you. You then need to move slightly to the right to weave between the orbs coming from the other side of the arena.

This boss’s attack pattern sees both of these moves used one after the other until you defeat it. During the lulls between attacks, get close to increase the frequency of your hits. There’s no need to use your Singularity Beam in this phase, but it will make things easier if you can get it fully charged by the end.

The second phase of this boss fight is probably the toughest. The combination of attacks is similar to the first phase, but everything’s a lot tighter and harder to dodge. The attacks Khalepo will use are below.

As with phase one, Khalepo will use these attacks so close together that it’s hard to get any kind of break.

The Close Burst attack is definitely the hardest to work around. The rings of orange orbs are so close that weaving between them is all but impossible. Try your best to do so, but if you have a fully charged Singularity Beam, use it straight away. This will knock a big chunk of health off and shorten the fight dramatically.

Straight after a Close Burst attack, Khalepo will fire a Purple Orb Blast. The purple orb will hit the edge of the arena, and waves of moving orange orbs will come your way. When this happens, head to the opposite side of the arena. The waves separate as they move, so you can get between them if you’re far enough away.

For both attacks, keep your distance and constantly fire at the boss. This is the phase that you want to go quickly. If you get the chance to use your Singularity Beam, then use it.

The third phase of this boss fight is definitely the easiest. Khalepo will create a red barrier and spin. It can spin in both a clockwise and anti-clockwise direction and will change whenever it feels like it. We couldn’t find a discernible pattern for that behavior, so keep an eye on it as you’re moving.

The only attack the boss will perform is a burst of orange orbs. These will settle in the arena, blocking your path. It’s tough to move through them because as soon as they’ve settled, they’ll move back towards the boss again.

The best tactic here is to move ahead of the red barrier as far as you can. Then, move back to the arena wall to ensure you don’t get hit by an orange orb. Once the orbs are out, pause. Keep firing at the boss the entire time. As soon as the orbs begin to move back towards the boss, start moving away from the red barrier again. Keep this up, and you’ll get through this phase without taking any damage.

If you can, pick up blue resources to charge your Singularity Beam. You’ll need it for the final phase.

For this last phase, Khalepo is more aggressive than it’s ever been. The moves you need to watch out for are as follows.

The boss has an obvious pattern with these moves. It’ll start with the Burst Series attack, which is extremely difficult to dodge. You need to get to the edge of the arena and move between the orbs you can see coming your way. If you have a charged Singularity Beam, use it when this attack begins. You should be invincible and dealing damage for the worst part of it.

Straight after the Burst Series attack, the boss will use a Wave Burst move. It fires a series of orange orb rings out that create a diagonal path you must move through if you want to avoid taking damage. At this stage in the fight, you need to avoid all the damage you can. Luckily it’s quite easy to move through the gap in the orbs once you see it.

Finally, we have the Massive Purple Orbs. This attack resembles the Purple Orbs move used in phase one. However, more orange orbs than ever will fly out of them when they hit the arena walls. You can dodge them just the same, though. Head to a point between two orbs where the orange orbs from either side won’t touch you. Then, move slightly to the right to avoid the incoming orbs from across the other side.

Keep this up, and you’ll kill the boss in time. The key to this phase is avoiding damage whenever you can. Pick up blue resources to allow yourself the space a Singularity Beam provides as well. Use it as often as you can because the longer you’re in this phase, the higher the risk of failing.