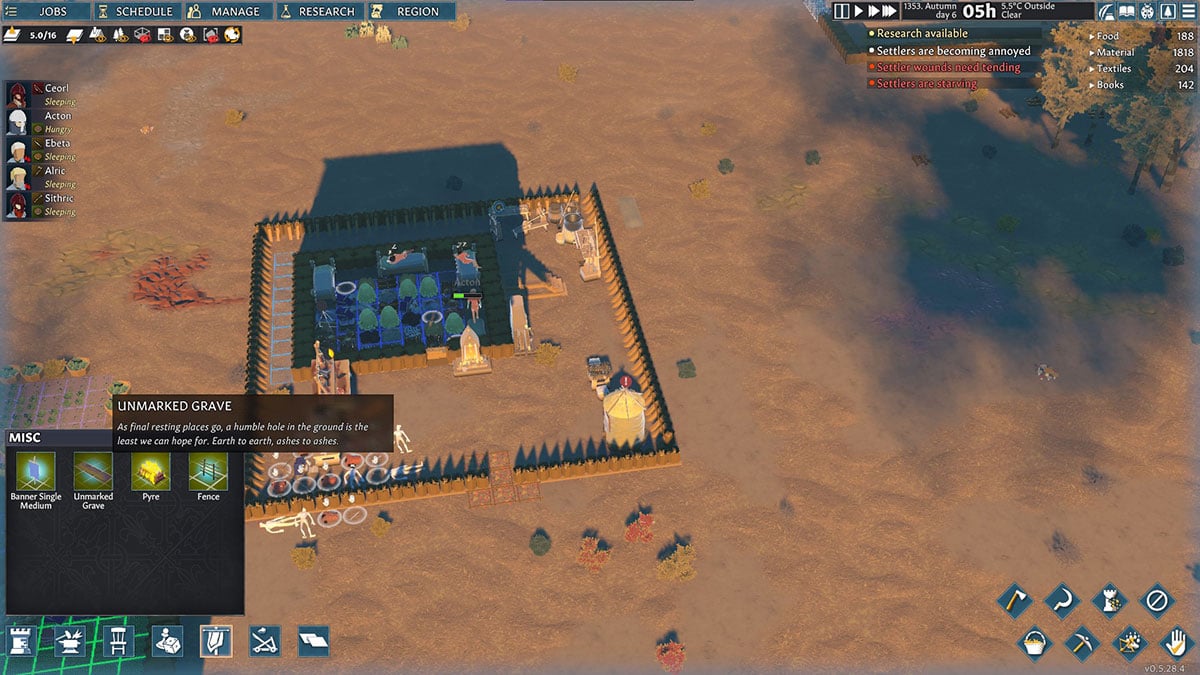 If you’re playing Going Medieval in either of the two modes with raids enabled, dead bodies are going to become a problem very quickly. Eventually, whether a raider kills someone or you manage to fend off the raiders but don’t heal everyone soon enough, a villager will die. In this guide, we’ll explain how to bury dead bodies because the game doesn’t make it clear, and the penalty for not doing so is devastating.

How to bury dead bodies

The first thing you need to do is build a grave from the Misc menu. It doesn’t matter where you place it, but we think it’s best to find somewhere secluded. Make sure there’s a lot of space so you can fill up the area with all the bodies that will come from your playthrough.

Once you’ve built the grave, select the body and remove the forbidden status from it. This will enable you to move it. Now select a villager. Ideally, someone with a good mood, right-click on the body and have them prioritize the burial. This will cause the villager to bury that body before anything else. When the body has been buried, they’ll go back to whatever they were doing before according to their schedule.

You can also get rid of a body using a pyre. You’ll need to build one first, then, just like you would with research, assign the production to it. You’ll have to choose how many bodies you want to burn, so make sure you know how many you have to get rid of before doing this.

Lastly, there is the option of eating the bodies. You can change a villager’s meal type to cannibalism and let them chow down on whoever falls after every battle. We don’t advise this, though, since it has damaging effects on everyone else in your settlement.

Why should you bury dead bodies?

Dead bodies have a big impact on the mood of your villagers. Seeing them will inflict a mood penalty against them of six points. If that dead body is someone they knew, though, one of your own villagers murdered in a raid, then the penalty shoots up to double digits. The penalty will be applied each time the villager is forced to look at the body. The longer you leave it, the bigger the penalty.

Bury all bodies as soon as possible. To prepare for this, you can build multiple graves at once. If you do, you’ll be able to use one villager to bury every dead body after a raid quickly, regardless of whether they’re dead villagers or dead raiders.