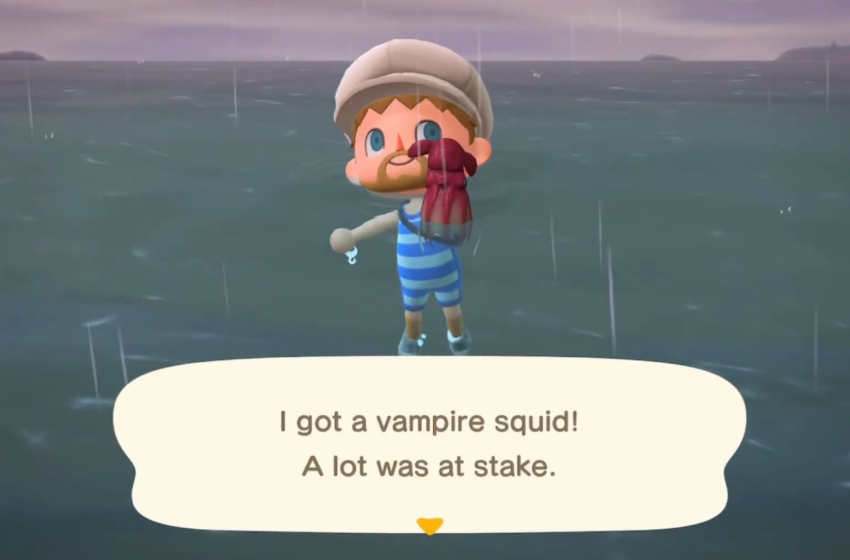 While swimming, sea creatures are signaled by their bubbles. The trail of bubbles leads to a shadow under the water. Diving under the water will startle the shadow and, depending on the creature, it may run away at various speeds.

The Vampire Squid is a rare creature that spawns in the deep ocean. To catch one, the player must update to version 1.3.0. If you haven’t already, it’s free, so don’t worry. After the update, obtain the wet suit from Nook’s Cranny. There are other designs from the Nook Shopping catalog, but those take an extra day to get to you. Unless you skip time in the Switch menu. That’s up to you.

The Vampire Squid only spawns from May to August in the Northern Hemisphere and from November to February in the Southern Hemisphere. It will spawn during the day from 9 am to 4 pm.

If you’re in the right time frame, jump into the water and swim around until you see bubbles. Dive and attempt to catch the creature. The Vampire Squid’s shadow will be fast and challenging to catch, but it’s possible.

It’s a rare creature even during peak hours. You’ll need more than a little luck to catch one. It’s worth catching for Blathers’ museum alone, but if you’re lucky enough to catch more than one, it’s worth 10000 bells.