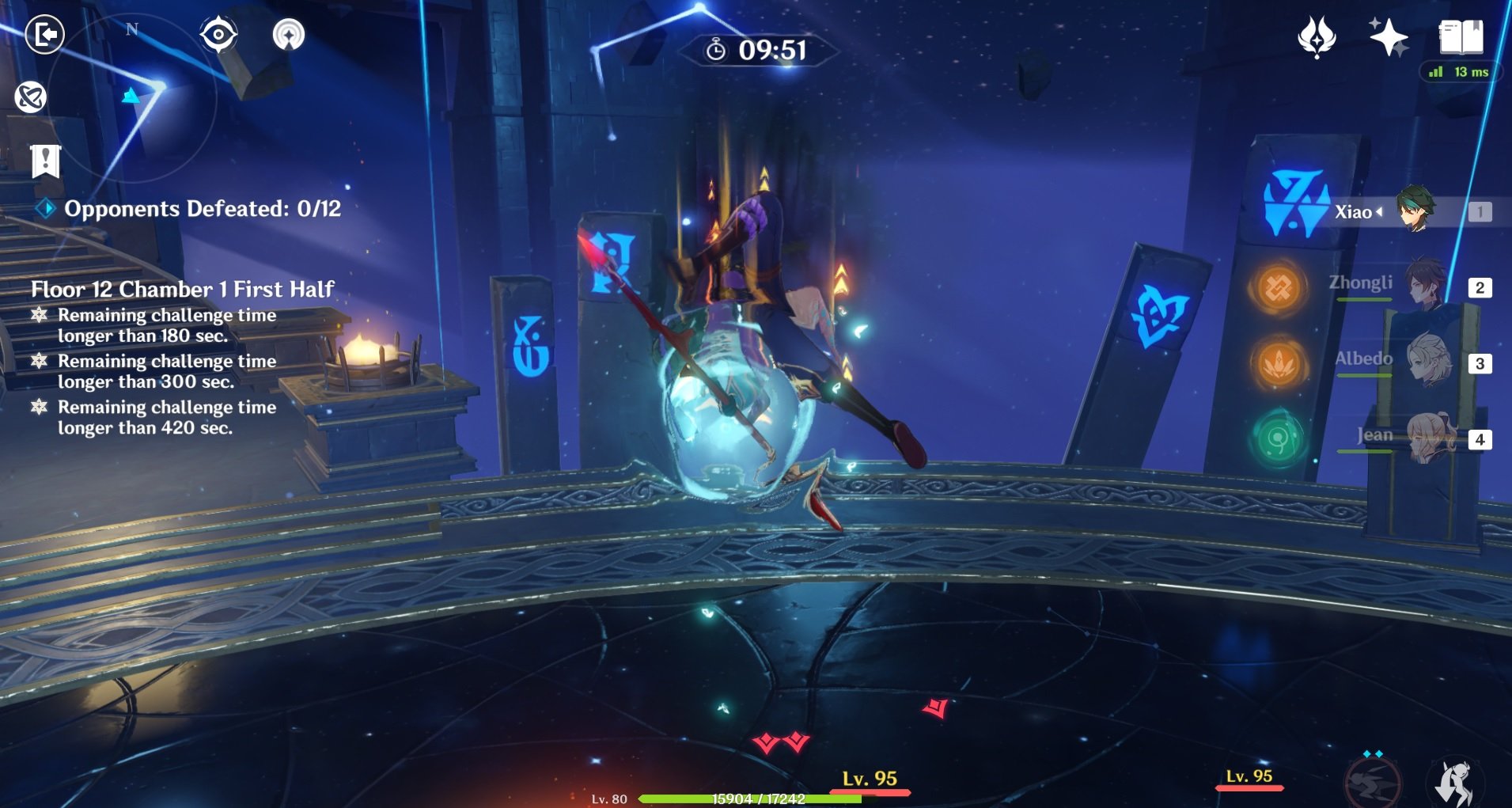 You’ve conquered Floors 9, 10, and 11, and now your team will be put to the ultimate test. Floor 12 of the Spiral Abyss in Genshin Impact is one of the most difficult floors yet, due to a strong DPS check on the final chamber. Because this is Floor 12, a clear of 5-stars is not necessary as there’s no more content to unlock. In this sense, you may be content with just being able to clear the floor altogether. However, the more stars you earn, the more rewards you earn as well, so it’s worth trying to do your best regardless.

Floor 12 has no Leyline Disorder, so just focus on dealing as much damage as you can. You still have the “Blessing of the Abyssal Moon,” so use that to your benefit.

Floor 12 is actually not too difficult as long as you have a team with solid DPS. The biggest problem is the final chamber, in which the boss requires a massive amount of damage.

Here, you should have a full team of level 80/90 characters, with the best artifacts you can find. If you aren’t properly built for this floor, you’ll have a tougher time clearing it. Your first team is more flexible than the first. Bring your strongest DPS on your second team — this is important. Consider these characters:

Anemo characters like Venti are still good, but not mandatory as many of the enemies on this floor are resistant to crowd control.

This chamber is the easiest one, but can still possess a problem for some players. The first half is nothing special, but the second half in particular introduces Specters into the Spiral Abyss. A lot of these enemies fly far away from your reach, making it hard to hit them. For dealing with the Specters, walking towards them will cause the Specters to retreat. Let them come to you, and deal damage to them once they do.

Tartaglia in particular is useful in the second chamber, as he can still hit enemies with his bow stance if they fly away. Ganyu is also a good choice, with her strong aimed shots trivializing the Specters gimmick of flying away.

The Maguu Kenki is the big challenge of this floor. At the start of the fight, the Maguu Kenki takes about ten seconds to charge up, being invulnerable to all damage. You can still use Elemental Skills on him in this stance, however. If your characters need energy for their burst, use skills during this phase to build up energy. He has certain HP thresholds where he unleashes a powerful attack that you need to dodge — this happens about 1/3 and 2/3 into the fight. Be aware of this, as this attack can one-shot your characters. Otherwise, it’s a battle of attrition.

If you have enough damage for the Maguu Kenki, the second half shouldn’t be a problem. The two spawn at the same time. I personally prefer to focus the Mirror Maiden to get rid of her Hydro trap as soon as possible. (If you have a character like Kazuha or Xiao who can jump high in the air, you can actually just escape the Hydro trap altogether.)

This chamber is the highest DPS check in the game to date. The Perpetual Mechanical Array in Chamber 2 has over 2.5 million HP you need to get through. In order to get a maximum amount of stars, you really should be able to clear the first half in about 30-45 seconds.

The Perpetual Mechanical Array has several phases. During the first phase, dodge its attacks and deal as much damage as possible. Once a certain amount of time passes or you deal a certain amount of damage, it will go into its second phase. Here, the actual enemy becomes invulnerable, and it spawns a number of minions. However, only one of these minions will take any damage. Look for the minion with a golden ring around it. Once you defeat that minion, the main boss will no longer be invulnerable.

There is a glitch that allows you to skip immediately to the second phase. If you pause the game, by opening the map or your handbook, you can wait about 45-60 seconds. The boss will immediately transition to its second phase. This is not recommended if you cannot kill the boss quickly enough. If you can’t kill the boss in time, it will enter its second phase again, ruining your time. This trick is only recommended for those seeking a perfect clear.