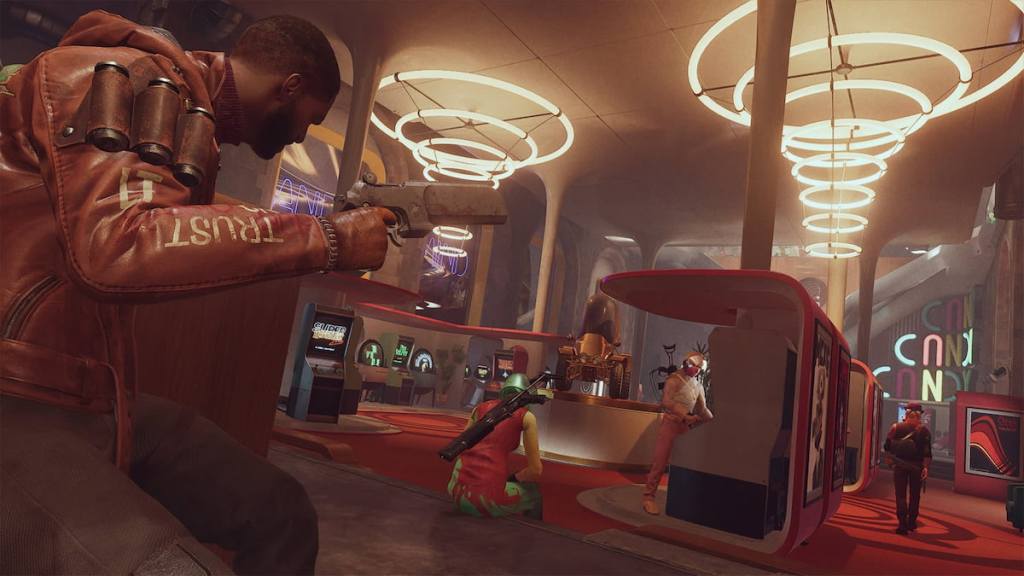 The All Night Long Arsenal Lead in Deathloop is your opportunity to take down Frank Spicer, a former friend of Colt. Still, he’s one of the Visionaries running the place, so he has to go. he has a worthwhile firearm that you’ll want to acquire and add to your gun collection, giving you a better advantage in future encounters against the other Visionaries. Here’s everything you need to know about completing the All Night Long lead. You do have to enter Frank’s building to access it, and the only way in is with a ClassPass, which cuts off your Slab powers.

The All Night Long lead can be completed on the Fristad Rock in the morning. You can start the lead by listening to the record labeled ‘A Loaded Word’ on the lobby desk.

Your goal is to make it to Frank’s studio and eliminate him. You can find the studio in the room behind you, full of Eternalists, a sensor, and a ballistic turret on the stairs leading to the second floor, and Frank’s studio. We recommend removing the Eternalists however you like and then hacking the sensor and the ballistic turret. You’re better off hacking them than constantly dealing with them.

When you reach the top of the stairs, you can go through the left or right. Both routes contain a handful of Eternalists, sensors, and doors you’re going to need to hack. You can choose to stick with remaining on one side or eliminate all of the Eternalists in the area and hacking all the sensors. We kept things cleaned and cleared out all of the nearby Eternalists. Once we finished, we stuck to the right hallway and made our way towards Frank’s studio. However, if you go down the left hallway, you’re further away from the enemies hanging out near Frank’s studio. So take this route instead.

There will be three Eternalists waiting in front of Frank’s studio. Instead of engaging them, sneak over to the left side and up the stairs. Frank’s bedroom will be there, and you remove the ClassPass, turning your Slabs back on.

Now, go downstairs and eliminate everyone there. Unfortunately, the doors are locked, and it’s a trap. Eternalists will pour into the room, and any ballistic turrets still not hacked will activate. You have to survive the wave of enemies until Frank leaves the studio.

When Frank leaves, you’ll be able to follow him thanks to the icon above his head. You can take him out however you want. Once you do, he’s going to drop several personal trinkets that you can use and the Constancy Automatic, an automatic handgun.