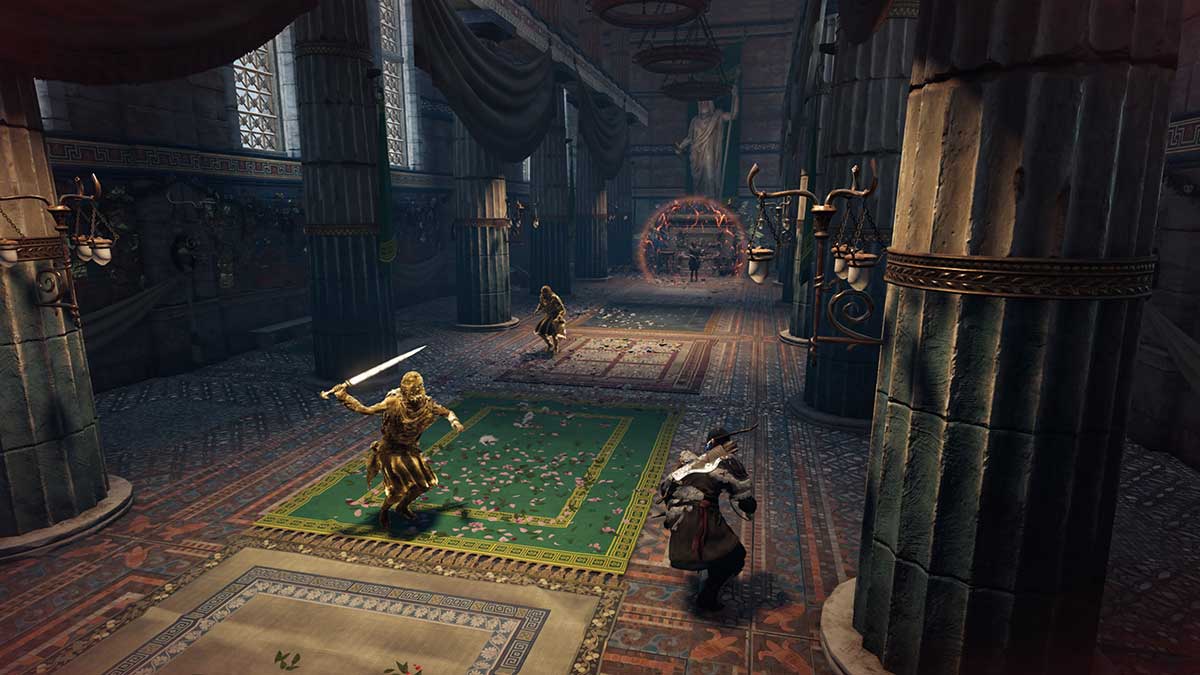 Power Corrupts All is the final quest in the Assassin’s Creed Valhalla crossover expansion in Assassin’s Creed Odyssey. You must complete A Message Delivered to start it. To complete it, you must face one of the most challenging bosses in the game to date, and not just because the fight is tough. This guide explains how to complete Power Corrupts All, so you know what to do every step of the way.

The first thing you’ll need to do is find the Artifact crash site. This is where the Artifact you found earlier in the story few off to. It’s at the highest point on the island, so it’s easy to find if you keep climbing up. It’s just northwest of the Akra Watchtower.

Once you get to the crash site, you need to investigate it. We found that this was easiest once we’d killed all the guards around it. Your investigation will reveal two possible locations that you can now go to. We went to the farm, following the footprints down the hill.

Step 2: Save the farm

To save the farm, or the second location, if that’s where you choose to go, you need to clear out the guards and speak to the people living there. Once you’ve killed them, all the people will tell you of a strange man who was everywhere at once, destroying everything around him. They’ll let you know the vague direction he headed off in, and you need to follow fast.

While running away from the location you saved, you’ll get a new objective to head to Kassiope and stop Barnabas. Along the way, you can take out groups of soldiers to stop them from killing him. However, we didn’t kill any guards, and he was fine. We believe this is because we got to Barnabas before those soldiers, so kill them if you want to ensure he doesn’t die.

Barnabas is hiding out inside the Temple of Zeus in Kassiope. To get inside, head around the left-hand side of the building, killing any guards you encounter. There’s an opening high in the wall here that you can use to jump in. Once you do, a cutscene will play out that you should pay attention to.

Inside the Temple of Zeus, you’ll have to fight Barnabas before he lets go of the Artifact. However, he’ll summon multiple copies of himself for you to fight instead of doing the dirty work himself. We found that using arrows was the easiest way to kill these copies in Kassandra’s weakened state. Take the enemies out slowly because more will spawn as you kill the others. There are roughly three waves of these enemies to fight through before the final encounter.

The final part of this fight sees you walking around the room and killing three versions of Barnabas as they beg for their lives. You don’t have to do much, but you should listen to everything they say. Killing all three will trigger the final cutscene.

In this last cinematic, you have to convince Barnabas to give up the Artifact. When given the choice to reach for the Artifact or the spear, we chose the Artifact. This injures Barnabas, but he doesn’t die. While we haven’t attempted it, we suspect that the spear option kills him. This will complete the quest.