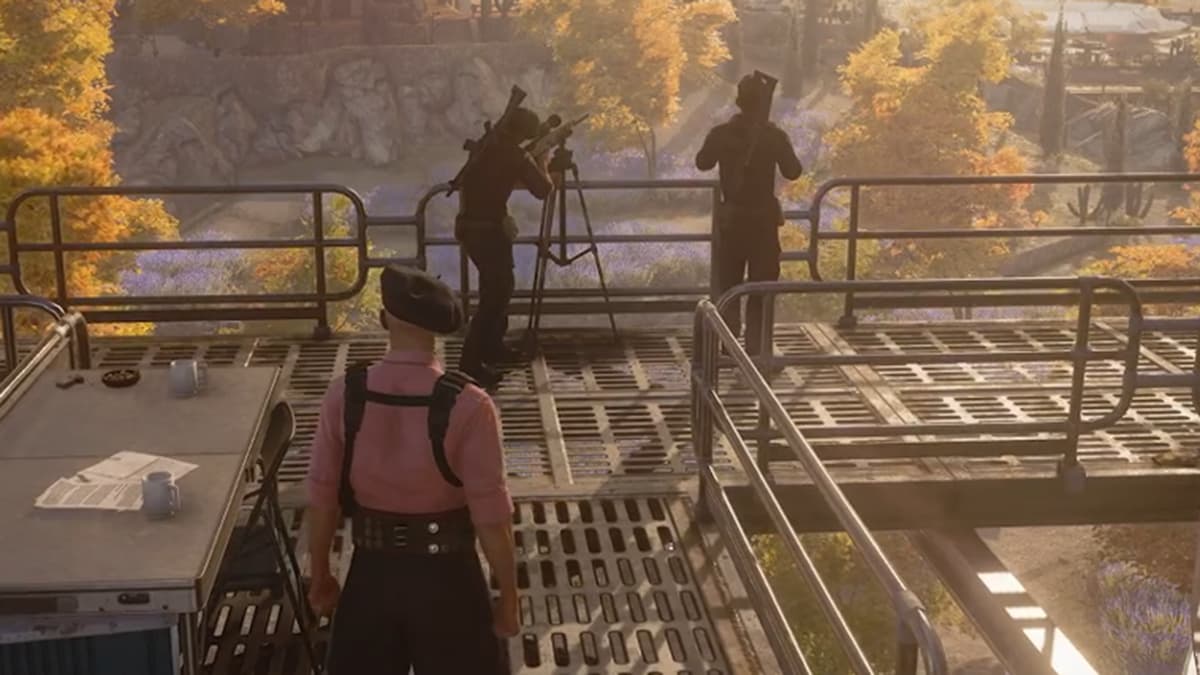 In the Hitman 3 contract Mendoza, which occurs in Argentina, you are tasked with taking down two targets, Tamara Vidal and Don Archibald Yates. However, there is a mission in the level where you can use Don Yates’ sniper team for your causes. It will include being sneaky, but you will have taken out a target without even getting your hands dirty when done. Here is how to complete the Eyes on Target mission for Mendoza in Hitman 3.

When you first start up the level, either talk to Diana and accept her invitation to the party, or grab one of the other multiple invitations found in the level. There is an easy one you can grab on a ledge by a party goer near the tree that the lawyer is at.

You need to sneak past the checkpoint filled with armed soldiers. If you climb over the left fence, you can crouch, walk your way past all of them, and climb through a window. Walk through the hallway here, but be careful. If you are spotted anywhere here, you will immediately start a gunfight.

Immediately outside of the hallway is a gaucho patrolling back and forth and will stop to talk to another gaucho through a window. If you use the forklift alarm on the right, you can get him on his own and steal his disguise.

Now that you are disguised, make your way up the nearby stairway until you find two snipers talking about the orders they have. Don Yates hired these men, so you cannot use them to shoot him, but with the use of your camera, you can trick them into shooting Tamara Vidal. Make your way down the stairway again and sneak to the vehicle in the field to grab an earpiece to communicate with the sniper team. There will be two noticers on top of you here, so use something to distract them for a few seconds so you can grab the earpiece.

When you grab the earpiece, you are given a chance for a small tutorial, so you understand how to command the snipers to shoot. You need to pull out your camera and scan a target. Your practice target here can be one of the watermelons on the nearby table, which will earn you another mission reward if you scan and direct them to fire on it.

Note: you need to keep the gaucho disguise on from this point forward because apparently, the sniper team can see you through the earpiece? Now that you are kitted out with what you need, it is time to go to the party. You can walk your way back through the hallway and checkpoint we used to get here in the first place; be sure to avoid the sight of any noticers. Present your invitation to the man out front, and you can walk right into the party. Make your way to where Tamara Vidal is. She is located very close to Diana, with three bodyguards in the immediate vicinity who will notice you if spotted.

Scan Vidal and then talk to Diana without the guards seeing you, and Agent 47 will tell her to lead them into the garden. At this point forward, you will want at least one blunt object so you can knock out the guards.

Follow behind the group, and they will begin to split up slightly. You need to take all three out without alerting the other guards or Vidal. If you jump into the patch of flowers on the left, you can crouch down and wait for the center guard to walk to the railing on the far left. Take him out first, then the one in front of you. Finally, take out the guard on the right, and if no one saw you, you can now give the command to the sniper team to shoot Vidal. She will be launched over the railing, so you do not even need to hide the body.