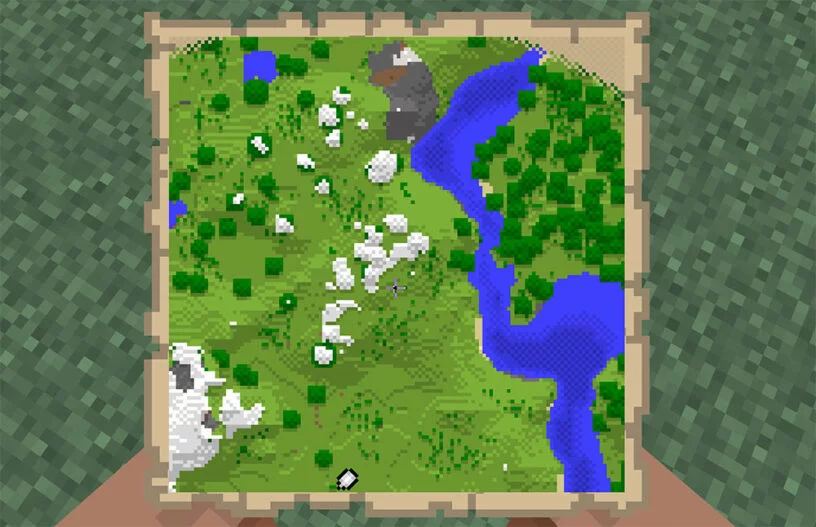 Minecraft can be considered one of the largest open-world video games on the market. Since it’s procedurally generated, there’s almost no limit to what players can explore in a single world. However, while this is fun for exploration and adventure, it’s also dangerous, as it’s extremely easy to get lost in the many biomes. That’s why it’s always smart to take a map with you. Here is how to craft, and expand, a map in Minecraft.

Crafting a map in Minecraft is requires two materials: paper and a compass. These two items aren’t just found in the world by themselves, however. You’ll need to craft each of them before you can get started on your map.

The paper is the most crucial ingredient, as you’ll need eight pieces of it to craft a map. To make paper, you need to find nine stems of sugar cane, which can be located directly adjacent to most bodies of water. Look for rivers specifically if you want to find large amounts or collect a smaller amount and bring them back home to make a sugar cane farm.

Once you have nine sugar cane, put three of them into a row on the crafting table, and you’ll receive three sheets of paper. Repeat this process twice more, and you’ll have your eight sheets of the required paper.

Next, we need a compass, which is a bit more expensive to make. First, you’ll need four iron ingots, which can be smelted from iron ore in a furnace. Once you have those, then it’s time to gather one piece of Redstone dust. Going cave exploring in altitudes at 15 or lower will net you some Redstone blocks pretty quickly. Once you’ve acquired those materials, put them into a crafting table to create your compass. This is made by placing one redstone dust in the center square, and 4 iron surrounding it. One above, one below, one left and one right.

Now it’s time for the map itself. Place the compass in the center square of the crafting table and surround all eight remaining squares with paper. Upon doing this, you will receive an empty map.

After you open your map for the first time, turning your ’empty map’ into a ‘map’, you will have the opportunity to zoom the map out to include more space. There are two major ways to do this, and both require more paper. You can expand a map four times in total.

If you choose to expand your map with the crafting bench, you will have to surround your map with 8 pieces of paper. If you are only planning to expand one map once, this is a fine choice, but if you are planning to upgrade multiple times, it can become intensive on your paper resources. Luckily, there is another way.

If expanding your maps are to be a regular thing, it is most efficient to create a dedicated space. The right tool for the job is the cartography table. A cartography table is crafted the same way as a crafting bench, only with two pieces of paper on top of the four wood. With this method, each map expansion only costs one paper, by putting the map in the top slot, and a piece of paper in the bottom slot.

Warning that expanding a map will reset the explored territory, so it is best to decide which map size you want before you begin your journey, especially if you are planning to go for the biggest size.