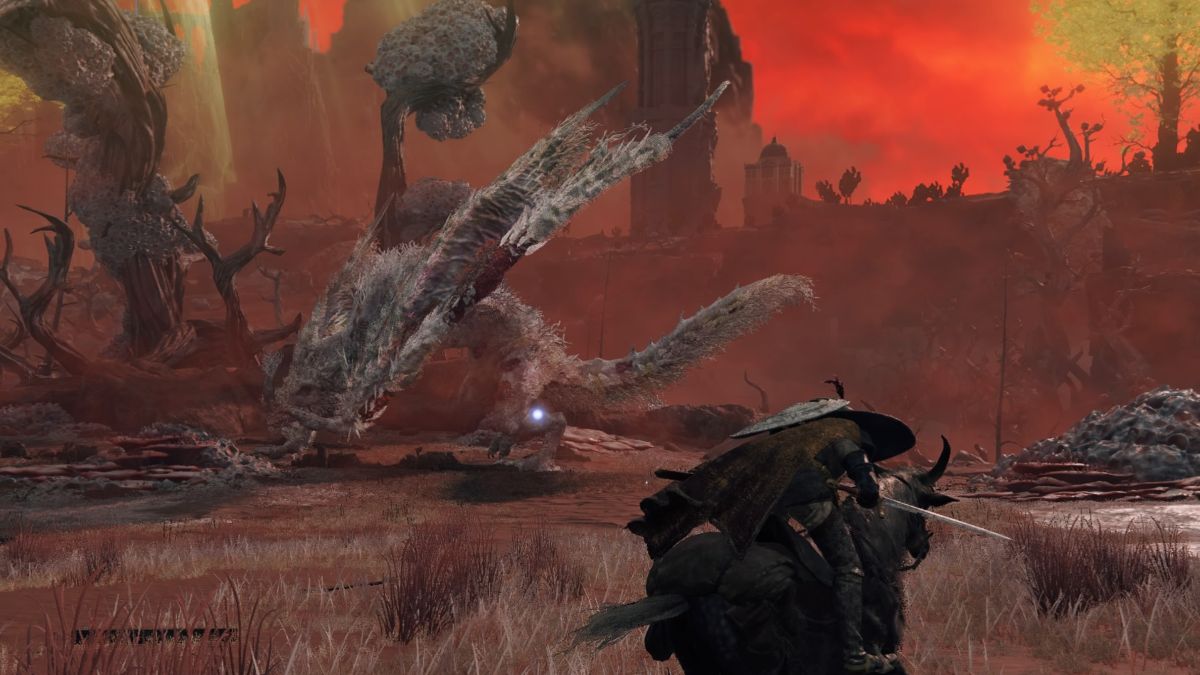 Dragons are troublesome for many in Elden Ring, but the Decaying Ekzykes may take the cake. It can poison you with crimson rot at a moment’s notice, making this fight incredibly difficult. Here’s how we defeated this great beast.

You’ll find the Decaying Ekzykes in the terrifying Caelid region. It is just west of the Cathedral of Dragon Communion and southeast of the Caelid Highway South site of grace.

When you approach, the dragon seems to be camouflaged in the nasty, red, and tainted moss. However, as you get closer, you’ll realize it is moving. Rush in there with your horse and start slashing the foe. We would recommend using a weapon that can deal blood damage as the Decaying Ekzykes is surprisingly weak to that.

Begin to hit its feet and try to keep to its side, avoiding its teeth and tail. Once you get a few slashes in, make sure to sprint out of there as fast as you can with your horse. The dragon will spew out its crimson rot all over the battlefield, so get enough distance between you and your foe to avoid instant death.

If you get hit by the crimson rot, be sure to use Preserving Bolushes to nullify its effects. If the bar goes full though, you’ll be lucky to survive as it drains your health so quickly.

During this fight, the dragon will start to hover in the air and then dive down for an attack. In these moments, make your horse sprint and then try to jump just before the dragon hits the ground.

For the Decaying Ekzykes fight, we recommend using a low-weight sword or axe, so you can flee at a moment’s notice rather than being stuck in a lengthy animation with a hefty weapon. We used a straight sword. Your key strategy is to be aware of the dragon’s movements and when you see its head rising up, know it’s about to release the crimson rot. Get out of there as quickly as possible.

After you’ve successfully defeated the Decaying Ekzykes, you’ll be rewarded with 38,000 runes. In addition, if you go back to the Cathedral of Dragon Communion, you’ll now be able to get Ekzyke’s Decay, which lets you spew scarlet rot breath from above.

You’ll need 23 Faith and 15 Arcane to use it. You’ll also need two dragon hearts to redeem the ability at the altar in the Cathedral of Dragon Communion.