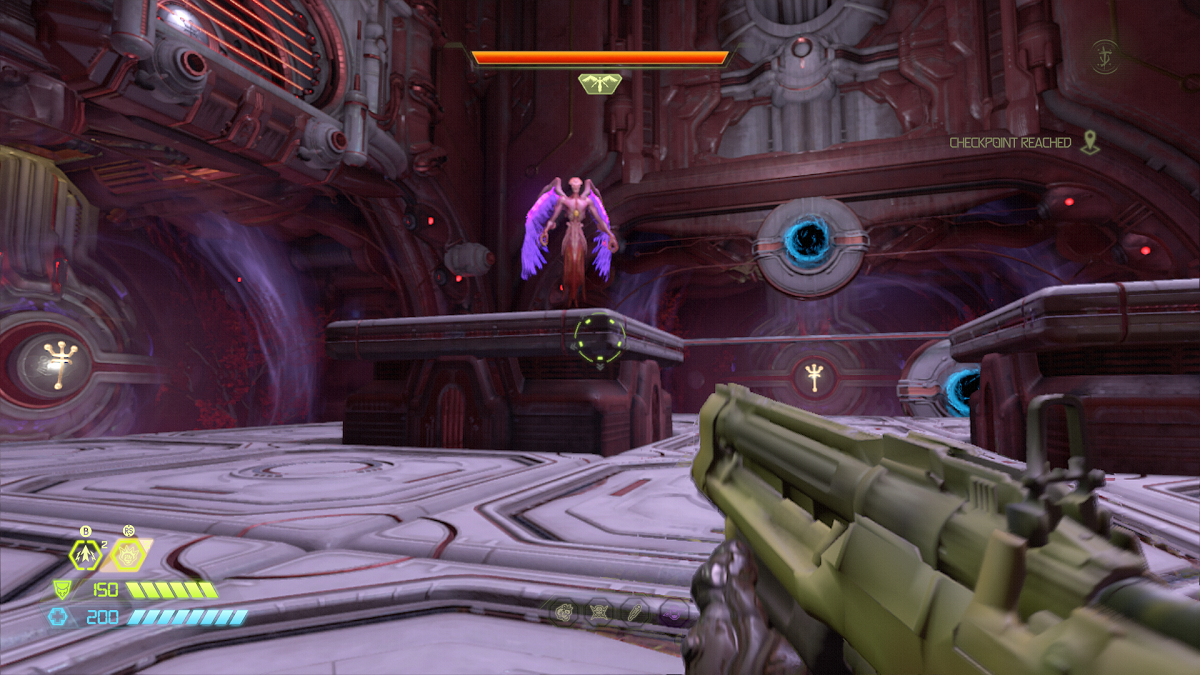 Doom Eternal: The Ancient Gods Part One wouldn’t be complete without a boss battle. The expansion’s major fight is with Mutated Seraphim, the demonic corrupted Maykr who stands between you and the Luminarium.

Mutated Seraphim is a tough foe, especially on harder difficulties. If you are struggling to best him, our strategy guide will help. We’ve broken the battle down into its four parts, so you can jump ahead to the part that you can’t get past.

Mutated Seraphim only has three moves in the earliest exchange. He teleports around the room, throws purple fireballs at you, and calls upon electrifying eyeballs to slowly rip your health away if you get too close. You can kill these eyeballs and nearby zombies, but they respawn, so unless you’re running low on health, ammo, or armor, focus your efforts on Seraphim.

Use your strongest weapons to deal big damage when he’s finished teleporting and also between his rounds of fire. Your rocket launcher, rapid-fire chaingun mod, and ballista are your best bets. Your shotgun’s grenade mod is also good for long-range attacks, and your super shotgun is great if he teleports right next to you. Keep peppering him until the next phase begins.

Seraphim will teleport to a platform and spawn two Spirit demons. You have fought these before, so you will know what to expect.

Focus all of your fire on killing on the Mancubus or Hell Knight that the Spirit demons inhabit. Use your dash ability to move around the room to avoid their attacks. Once one demon is defeated, quickly use your plasma rifle’s beam fire mod to kill the spirit demon. You will only have around 10 seconds to kill it before a new demon spawns for it to inhabit, so be quick.

Once one spirit demon is defeated, repeat these steps on the second one. Seraphim is vulnerable at this point, so climb up to his platform and melee him once to move the fight along.

This is where things get tricky. Seraphim will employ similar tactics to part one, but with added threats. Blood Maykrs arrive and will respawn if you defeat them. Seraphim also calls upon lasers that move across the room to deal additional damage, as well as the eyeballs from earlier.

Jump and dash to avoid enemy fire. You can maneuver to any of the newly formed platforms to give yourself a few seconds of respite before they find you again, so use this time to scope out where Seraphim is. He will be teleporting around you quicker than before, so move around until you see him settle and prepare to throw fireballs at you.

Again, use your most powerful weapons to deal serious damage, or the fight will take longer. Kill the eyeballs for ammo if needed, along with any spawning zombies for health and armor. You should only engage Blood Maykrs as a last resort if you desperately need ammo. Otherwise, they are just a distraction.

The final part is similar to part two. Seraphim spawns two more Spirit demons, but he opts for a Cyber Knight and a Pain Eternal for them to inhabit. Follow the same steps as part two to take out each Spirit demon at a time. Remember, don’t stay still, and watch out for Blood Maykrs and eyeballs that occasionally spawn to add more of a challenge to proceedings.

Once both spirit demons are defeated, Seraphim will only need one more hit to defeat him. Jump and dash to the platform he is on to melee him one final time to finish the fight.