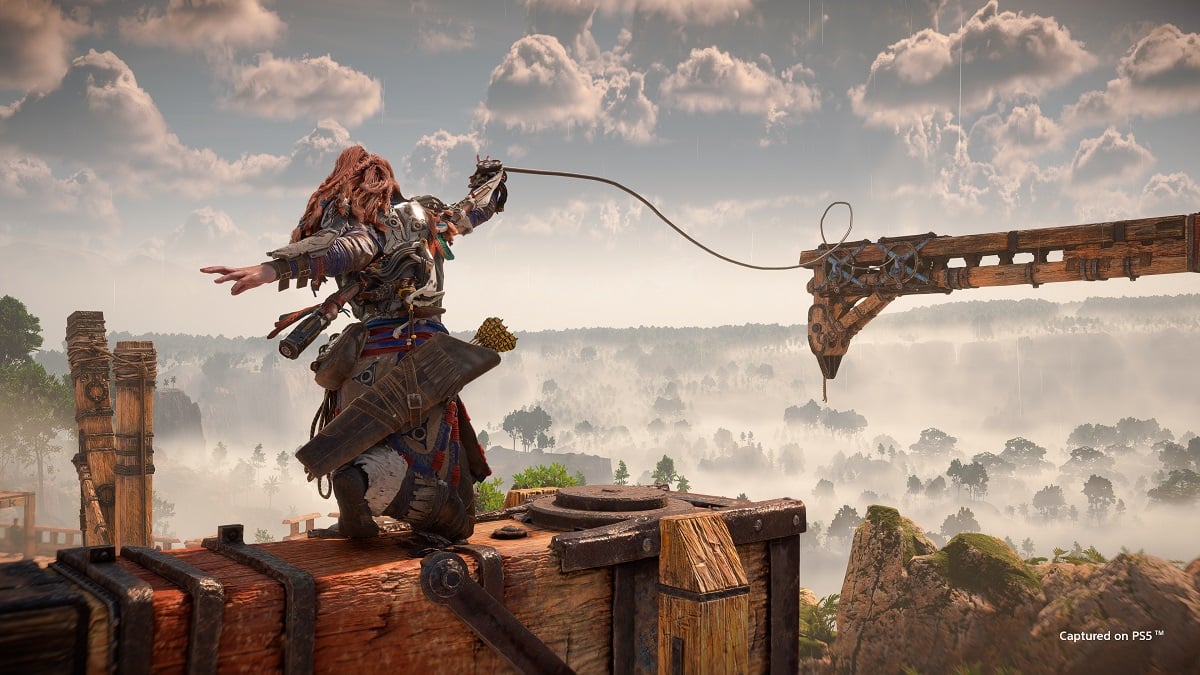 In Horizon Forbidden West, one of your tasks is to find ornaments throughout the world. One such item can be found in The Daunt Relic Ruins, but you’ll have to use your smarts to unlock the door and find the ornament.

The Daunt Relic Ruins can be found directly south of Chainscrape and is north of a scrounger site. Once you arrive, you’ll see a set of three rickety wooden buildings from a past time.

Enter inside the first building on the left, and you shall see a blue and yellow box. Press the triangle button and set it underneath a higher platform on the right side with the locked door. You’ll also see a yellow circle Aloy can grab on to.

You’ll see the locked room we need to get into and a terminal requiring a passcode of some kind. We’ll need to find the key and the passcode to proceed into it. Go to the left of the locked room, and you’ll see a wooden ramp. Sprint with the L3 button and jump to cross over to the next building. Drop down, and you’ll notice something peculiarly purple on a wrecked bench. Hold the R3 button to scan it. This will give you a note that includes the passcode. We’ll get to that later.

To get the green chest above, equip your pullcaster by pressing the L1 button and triangle. It will contain one blast trap, five machine muscle, three metal shards, two wild meat, six medicinal berries, and seven metalbites.

Walk around for a moment, and you’ll find another blue and yellow block on the second level. Get your pullcaster back out and attach the whip to the box to bring it down. You can now use this as a platforming tool. However, this isn’t the last usage of the pullcaster. Turn around, and above you’ll see a vent-like object above Aloy’s head. Pull it down to reveal a tunnel she can crawl into. On the right, you’ll see another pillar with a blue marking. Use the pullcaster on that, so Aloy can climb her way to the tunnel with the box you just brought down.

Now that you’re in the third building, continue forwards, and you’ll see a hole in the ground. Go underneath, and you’ll eventually see a way out ahead of Aloy. As you attempt to climb, one of the yellow handholds falls off—what a pickle. At the end of the tunnel, look at the ceiling, and you’ll see some blue metal conveniently hanging above you. Use the pullcaster once more and bring down the rock to form a new hole.

Once you’ve made it to the top of the third building, stop and look for a chest with a blue light on a balcony to the left. Drop down and collect it.

When you have the key, go back to the first building and climb up to the locked room, but before interacting with anything, press the touchpad to open your menu. Toggle over to the “Notebook” section with either the L1 or R1 buttons. Find “Datapoints” and then scroll all the way to the bottom to “Relic Ruins.” Read the text file to the end, and you’ll see the passcode. We found it was 1705.

Enter the number into the terminal on the left side of the locked door. It will then be able to open up. You’ll then see The Daunt’s ornament ready to be picked up.

This was a past mystery that we have now solved, but something that isn’t explained is how to break metal flowers.