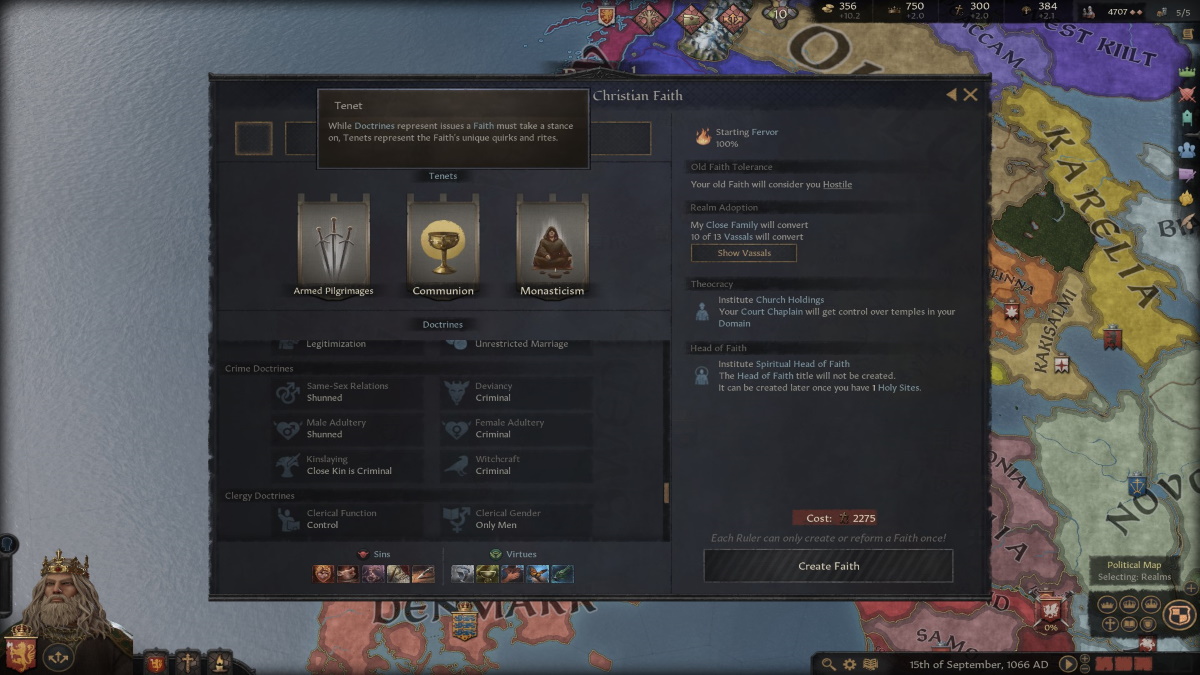 Faith is a defining feature of your character in Crusader Kings 3. It’s a way for them to gain piety, but it’s also a way to ensure they remain true to their core beliefs. It makes interacting with those who also follow your faith significantly easier. It also determines if other characters like you or not.

There’s a massive page regarding your faith in Crusader Kings 3 that breaks down everything you have to do to follow it. These determine essential aspects that can have consequences for your character if they do not abide by them. By not adhering to these tenets and doctrines, you can quickly become a target for others of your faith. Plus, you won’t be able to gain as much piety, which is extremely useful to use as an alternative to currency and prestige.

You can find all of this information on the lower-left portion of your screen. You should see the symbol next to your character portrait that represents their faith. Click on it to pull up the massive menu detailing what aspects they should follow.

The tenets of your faith are the unique quirks that your faith admire and follow. The characters who follow Ásatrú encourage you to promote ancestor worship, human sacrifice, and warmonger. That means you want your character to honor their forefathers regularly. When you take prisoners during a war, you can freely execute them to gain faith and not suffer any ramifications. However, this is not always the case when you have family members or political figures in prison. You need to be careful about it.

Also, when Ásatrú characters go to war, they gain piety like they do prestige by fighting. So the more combat and battles you have, the more piety you gain. It’s in smaller bursts, though.

Your sins and virtues are the character traits your faith discourages and promote, respectively. Should your character have any of the three sins, chances are others who follow Ásatrú do not like you as much. If you have any of the virtues, they likely have a greater opinion of you. Make sure to double-check these when helping to mold your heir or give them a guardian to watch.

These are the three major effects and decisions of your faith. For example, it determines if it is male or female-dominated or seen as equal. It determines how others see you, if characters who follow this faith have massive negative impacts, and determines what happens to vassals during holy wars. It also determines the type of inner government. For example, the Catholic faith has Theocratic and Ecumenism beliefs, determining their internal structure and how they view others’ faith.

Your faith’s marriage doctrines break down how marriage works, and even details how divorce can happen. Make sure to refer to this before immediately taking a spouse. If you and your spouse start to cross swords and become complicated to manage, it could be a lot harder to break up with them than you believe. It also determines how the faith views bastards, making you reconsider stepping outside of your faith when sleeping with another you are not married to.

These break down the various crimes of your religion. It shares how they view same-sex marriages and view deviant traits of a character, male and female adultery, kinslaying, and witchcraft. If some of these are not criminal, you can feel free for your character to do them. However, it also means others who follow the faith can do these, preventing you from imprisoning them if these secrets come to light.

chosen and their authority. It determines how much more control they give your various counties. It also shows how they are appointed, for how long, if they can be married, and if a male or female can be chosen as one. Mostly, it determines who can be in your Councillor’s position and how much power they have. It also helps to know how much authority they have in your kingdom because they could easily sway the population against you, or make them easier to maintain.

At the bottom, you have the head of your faith. Some faiths, such as the Ásatrú, do not have one, whereas the Catholics do. Based on the doctrines of your faith, they have varying powers over you and your kingdom.

The final option is to create a new faith within your faith. It costs quite a bit of piety to do so. However, it allows your character to modify the various doctrines, tenets, virtues, sings, and laws your faith follows. The typical cost to create a new religion is 4,250 piety, with each change to the current doctrines costing more. You can also see on the right side of creating a new faith how many vassals and how many in your realm will follow you.