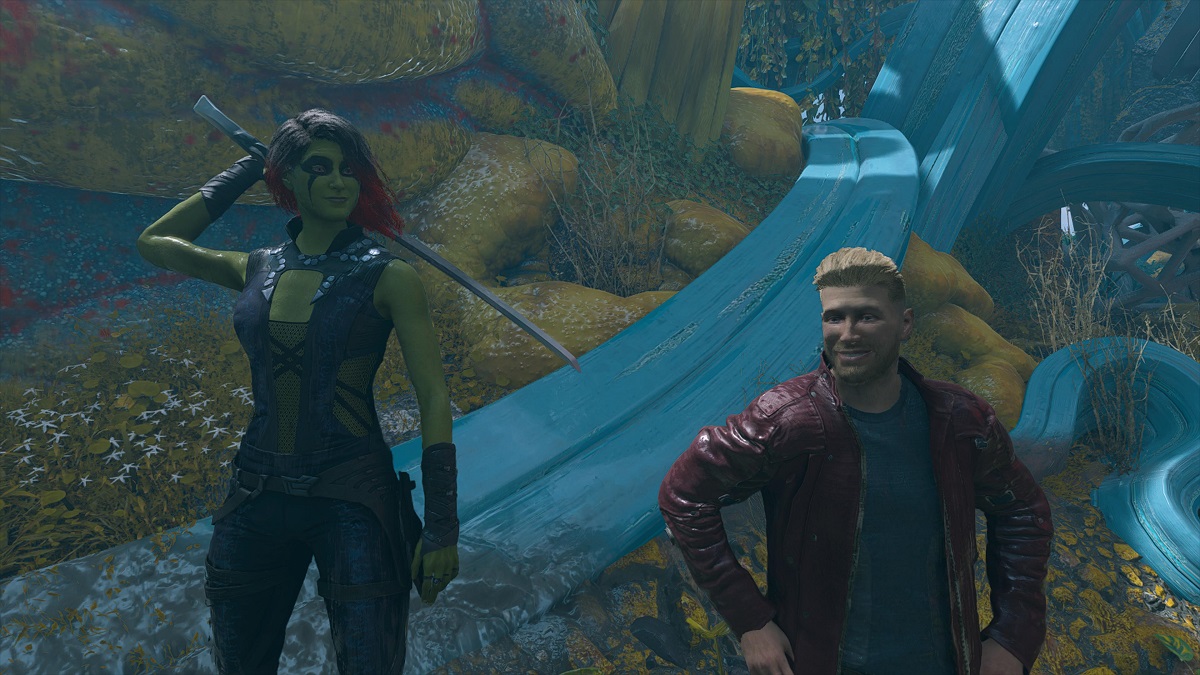 Marvel’s Guardians of the Galaxy from Eidos Montreal lets fans of the MCU movies equip costumes that are inspired by their screen adaptations. For example, you can play as Chris Pratt’s variation of Starlord within the fun action-adventure title, but only his look, not his voice. Every Guardian has their own MCU-inspired outfit that will delight those who know these heroes from the blockbuster appearances.

Every MCU skin can be found within purple chests throughout the game. They’re hidden from the main path, but most are easy to find. Thankfully, there’s a chapter select option, so if you miss one during your playthrough, it shouldn’t take you long to get the MCU costume you want in Marvel’s Guardians of the Galaxy. Keep pressing circle during cutscenes to skip dialogue and try to avoid as many interactions as possible.

You can find the protagonist’s MCU skin within Knowhere during Chapter 6 of the story. After Starlord’s encounter with Lipless at the bar, turn right from the establishment until you see pink roots encircling around another bar. Pink crystals have grown among the moss. Once you approach the building, go to the left. You’ll see some kids pretending to shoot each other. Don’t interact with them because the rascals will steal your money. Now, jump over the guard rail onto some red pipes. On the left, you’ll find Starlord’s MCU costume.

Feel the power of the former WWE champion Dave Bautista within Drax’s MCU costume in Chapter 4. As you return to Lady Hellbender’s throne room, you can spot a purple treasure chest behind it to the left. You’ll have to go up the red ramp and jump over to reach it.

You can find Groot’s MCU outfit early on in the game within Chapter 1. After you come across the yellow infinity stone and see a monstrous black being you barely escape from, finish the cutscene and then turn immediately right until you find a hole within the pink mess. Crawl inside the small entrance and you’ll find a room filled with yellow boxes. On the right side, you will find a purple box ready to be opened. It’s one of the easiest MCU skins to find the game. It’s too bad we can’t hear Vin Diesel’s deep voice in the game as well.

In the early stages of Chapter 1, Rocket claims that there’s a dead end on the right side. Rather than listening to him, follow that route but before going down the metal skeletal path, go to the broken down purple ship on the right. There is a hole in its roof. Drop down it, and you’ll find Rocket’s MCU skin in a chest.

Finally, you’ll find Gamora’s MCU skin within Chapter 3 of the game. This chest is located within the area after climbing the red resistance ship. After talking to Gamora about a monster’s tracks, turn right of the uniquely alien red curly structure.

Follow the path, collect the basic components, and then turn go left. You’ll see a hole you can crawl into that’s covered in blue foliage.

Enter the cave (don’t worry about the mystery goo) and go right. Follow that path until you find some moss to destroy. Use a charged shot to get inside. Now, you’ll encounter one of the nasty jelly creatures. Starlord is by himself so use a charged shot to take them out. Now, shoot the white moss to reveal a hidden passage.

Cross the drop and then slip through the crack in the wall. Climb once to the higher platform and you’ll find a purple chest that contains Gamora’s MCU skin.

How to switch costumes

To switch costumes, go to the character menu, select your preferred Guardian, and press the triangle button (Y on Xbox or X on the Nintendo Switch). Now, you can make the Guardians of the Galaxy look like their movie counterparts.