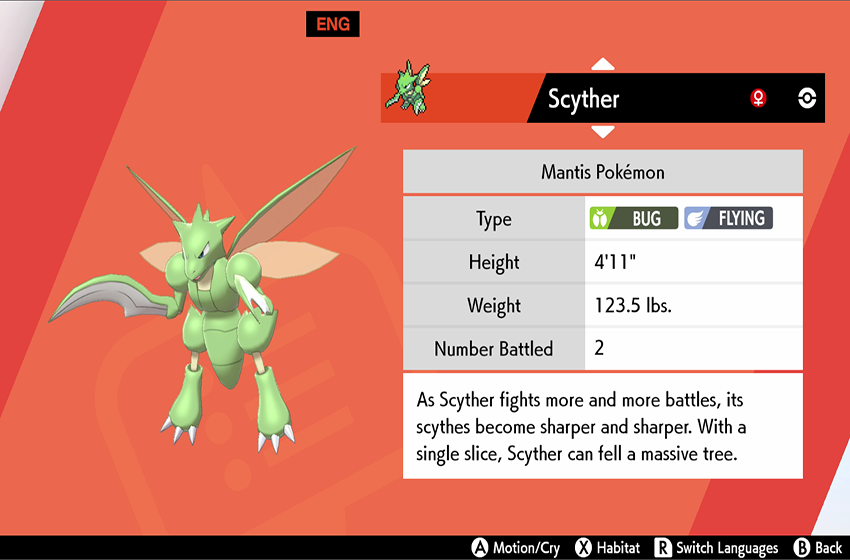 Scyther is a bug and flying type Pokemon that has been in the series since the very first releases of Pokemon Blue and Red. While not in the base game of Pokemon Sword and Shield, the fan favorite does make its way over in the Isle of Armor expansion. Anyone looking to evolve their Scyther into Scizor will also be happy to know that they are back as well. While you could possibly get lucky and find a Scyther in a raid den, they appear quite frequently in the wild area. Here is where to find Scyther in Sword and Shield’s Isle of Armor DLC.

Related: How to get Foongus and Amoongus in Isle of Armor

Scyther are rather easy to find in Isle of Armor. Simply head to the Training Lowlands, which happens to be the Pokemon’s habitat. They appear during any weather pattern, so simply show up and you should have plenty of chances to catch one.

If you are looking to get yourself a Scizor, no worries! It is rather easy to do as well. To evolve to Scizor, a Scyther needs to be holding a metal coat and be traded, just like ever since Scizor was introduced in generation two. To get a metal coat, travel to Stow-on-Side in the main region of the game (it is to the west of Hammerlocke). In Stow-on-Side, head to the left until you find a back alleyway. Climb up the ladders in front of you until you are at the very top. There will be a man sitting with his feet dangling off the roof. The item sitting next to him the metal coat you need! If you do not feel like using it to evolve Scyther, you can also use it to boost steel type moves for another Pokemon.

Obviously, since you have to trade the Scyther to make it evolve, be sure to trade it to a friend (either locally or over the internet) who will trade it back so you can have your new steel bug!

Be sure to stay tuned to Gamepur for more Pokemon guides!