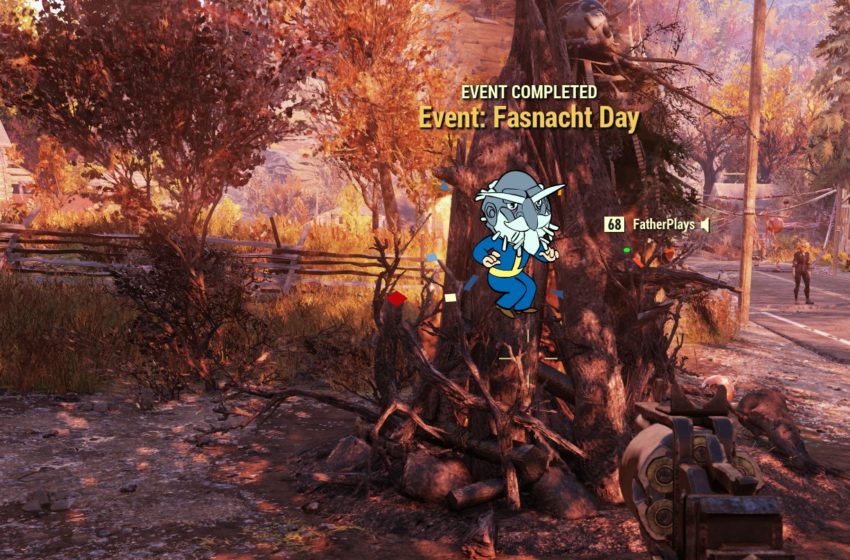 The Fasnacht Day Crazy Guy Mask has returned for the Fasnacht Day celebrations in Fallout 76. The event will run from May 27 to June 9. An additional week was added to the event due to Fallout 76 being offline and the event seeing some delays. You can start the event by speaking to the Master of Ceremonies, who is in Helvetia.

After speaking to the Master of Ceremonies and you receive the task to prepare the town for the parade, you need to perform five of these tasks:

Other players in the area also attempting to start and participate in the parade will likely be assisting you with the five tasks, which makes completing them much faster. There is a set time limit to complete it before the parade starts. Once you have finished all of the tasks given to you, return to the town center to prepare to march with the parade as the Master of Ceremonies leads the way.

During the parade, you will need to protect the marchers following the Master of Ceremonies. Other players will be doing the same, so fight off any of the enemies that spawn into the area and protect the robots. After the Master of Ceremonies has led them back to the church, a legendary Megasloth will spawn in front of the parade. You and the nearby players will have to take it out.

After the Megasloth has been taken care of, you can light the bonfire and speak to the Master of Ceremonies. You will receive a reward for your hard work, and one of these rewards can be the Fasnacht Day Crazy Guy Mask.

Unfortunately, there are several masks you can obtain for completing this event, and because they’re random, there’s no guarantee you will receive the Crazy Guy Mask as a reward. The better you do at the event, the rarer and higher-quality mask you will receive. To improve your performance at this event, you need to protect the robots in it.